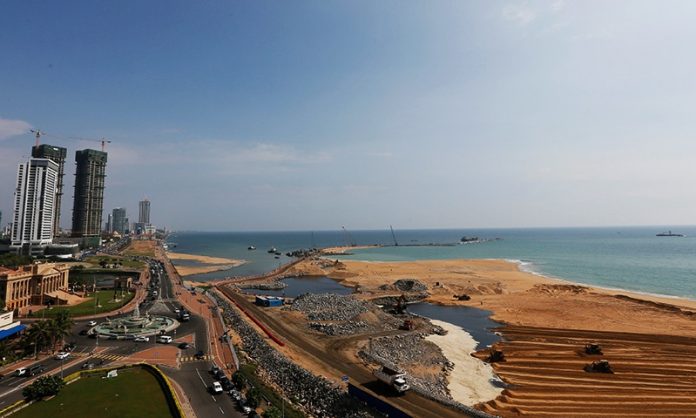 The contest for Sri Lanka is all but over. China has emerged as the principal influencer of the strategically located island nation, displacing the incumbent overseer India.

The parliamentary approval last week, amidst opposition concerns over sovereignty, for the crucial Chinese-backed Colombo Port City project simply means that Beijing is well and truly entrenched in the island nation – just an arm’s length away from India’s southern coast.

The Colombo Port City, developed and managed by the China Harbour Engineering Company (CHEC), is spread across 269 hectares (660 acres) mostly on land reclaimed from the sea. It is slated to be a mini-city with its own rules on trading, investment and in doing business. The $15 billion project was launched in 2014 when Mahinda Rajapaksa was president during a visit by Chinese President Ji Xinping.

The port city is the second major project for China after the acquisition of the Hambantota port on a lease for 99 years. These are just two of the multitude of infrastructure and other projects that China has signed with Sri Lanka as part of the Belt and Road Initiative (BRI).

Also read: Why Tamil-speaking Muslims in Sri Lanka broke away from Tamil identity

The Chinese juggernaut is unstoppable. Days after the Port City clearance, on Monday, CHEC bagged another project – to build a 17-km four lane highway in Colombo. The Rajapaksa brothers – Mahinda, the prime minister and Gotabaya, the president – have had a special relationship with China over the last 15 years, their bond growing stronger after Beijing’s help with arms and ammunition in the Tamil separatist conflict that ended with a Sinhala victory in 2009.

With India maintaining a hands-off approach to Sri Lanka after the LTTE’s assassination of former prime minister Rajiv Gandhi in 1991, the space was strategically filled by China. Since then, Beijing has worked its way into Sri Lanka, a nation that was historically close to India, culturally and politically. India’s dominance was seen right through the 1970s until the killing of Rajiv Gandhi two decades later. During these years, it was India which dictated politics in Sri Lanka, playing a huge role its internal affairs.

However, from 2009, irrespective of who has been in power in Colombo, the federal government has had to accommodate Chinese interests in that nation. When Mahinda Rajapaksa was defeated in the presidential election of 2015, his successor-government under President Maithripala Sirisena was seen to be closer to India.

But as it turned out, three years later, a schism developed between Sirisena and Prime Minister Ranil Wickremesinghe – a direct result of the larger China-India rivalry. On assuming power, the high-level of Chinese debt incurred by the earlier Mahinda Rajapaksa government forced the Sirisena government to hand over the Hambantota port on a 99-year lease to Beijing. Wickremesinghe then attempted to make amends by suspending Chinese involvement in construction activities at the port. With too much at stake, Beijing applied pressure on Sirisena who dismissed Wickremesinghe and replaced him with the pro-China Mahinda. Eventually, the tussle led to elections in 2019.

Gotabaya (who had been the defence secretary during the final years of the Tamil conflict) was elected president and he quickly inducted his brother Mahinda as prime minister. China had asserted its clout unequivocally.

As for India, though the Rajapaksa brothers have occasionally made the right diplomatic noises, including visits to New Delhi by Gotabaya, their pronounced China leanings are there for the world to see. For example, in February, Sri Lanka abruptly dropped India and Japan from the East Container Terminal project in Colombo port under Beijing’s pressure.

The Rajapaksa government’s complete identification with China, while hurting India’s interests, has larger geopolitical ramifications. Already, South Asia is in the grip of Beijing with Bangladesh, Nepal and Maldives tied up with China economically under the BRI. Over the last one year in particular, China has noticeably been more belligerent on the border with India.

The formation of the US-led Quad group of nations is potentially an anti- China axis. For India, the only hope to salvage some foothold in Sri Lanka is if the Quad, particularly the United States, acts on behalf of New Delhi. While there are no signs of that at the moment, it may just be a matter of time before Colombo feels the pressure from Washington.

The US is already on the side of countries demanding action from the United Nations against the Lankan government for its alleged war crimes during the final stages of the 2009 Tamil separatist conflict. At a meeting in Colombo last month with a visiting Chinese military delegation, Gotabaya made it amply clear that Sri Lanka was with Beijing in all possible ways. Interestingly, a “military assistance protocol” was signed between the two countries. A Lankan defence ministry statement talked specifically of military cooperation too in the near future.

For India, it is obvious that China has Sri Lanka firmly on its side. The China-Lanka axis will prove to be a major strategic and foreign policy headache for South Block’s foreign policy experts. Handling this will require a level of sagacity that the government in New Delhi has not shown it is capable of, so far.

Lankan Tamil politicians, during the debate in Parliament on clearing the Colombo port deal last week, feared that pushing India beyond a point could prove counter-productive. They were referring to a time during the Cold War when Sri Lanka moved close to the US, prompting pro-Soviet India to back the Tamils in their separatist struggle. But such doubts have not had any impact on the Chinese-fixated Rajapaksa brothers.

From Colombo’s point of view, its relationship with China over the last 15 years has proved beneficial. The Sinhala lobby that struggled to defeat the Tamil separatist movement now feels secure under Beijing’s protection. Internally, they may even hope that the deep involvement of China will preclude any future attempts by Tamils to fight for a separate nation.

Now, this type of assurance can never be given to Colombo by New Delhi as no central government can afford to antagonise its own Tamil population within India by appearing to work for Sinhala interests. For Colombo, the experience of working with India since the 1980s, climaxing with the entry of the Indian peace-keeping forces into northern Sri Lanka, is evidence of New Delhi’s limitation.

But Sri Lanka by getting into an exceedingly close relationship, including militarily, with China and allowing Beijing to work on vast and strategic swathes of land and port could end up diluting its own sovereignty and independence. Lankan dependence on Chinese financial largesse is also growing exponentially. In fact, various political parties cutting across Sinhala-Tamil lines expressed deep concern on these issues in parliament last week.

According to reports, opposition political parties during discussions described the Colombo port city as a “Chinese enclave” as many of Sri Lanka’s laws would not be applicable there. Senior Tamil politician CV Wigneswaran was quoted by The Hindu newspaper as asking whether “One Country, One law” meant “Chinese law”.

The moot question is: whether Sri Lanka by embracing China in a tight hug and discarding India like an unwanted spouse, is jumping from the proverbial frying pan into the fire.