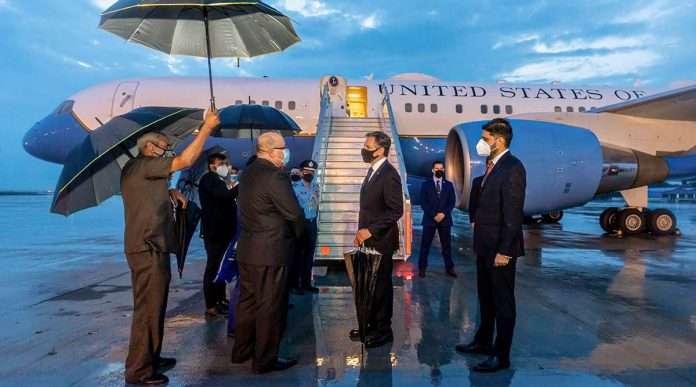 US Secretary of State Antony Blinken on his two-day visit to India earlier this week: For the US, historically, any threat to any of its businesses anywhere in the world is viewed by its governments seriously. Pic: PTI

Since July 8, something has changed. All the noisy, manufactured rhetoric and outrage against Big Tech companies, notably Twitter have died down. And, the individual who ratcheted up the decibel against Twitter is no longer a minister. Yes, Ravi Shankar Prasad is noticeably present by his absence. His successor with the IT ministry portfolio Ashwini Vaishnaw, besides a cursory statement or two against Twitter, has said nothing more.

There is an ongoing litigation in the Delhi High Court that forces Twitter to be answerable, but that is within the respectable confines of a court hall, where arguments are measured and nothing outlandish is said on the issue.

Yet, in the months preceding July 8, it looked like the Indian government represented by the then IT minister Prasad was taking not just Twitter, but the other social media giants WhatsApp and Facebook to the cleaners. The former minister’s stern persona dominated television channels, demanding compliance of these powerful tech companies to Indian laws. If the government filed FIRs against Twitter, the social media giant first termed a BJP spokesperson’s tweet as “manipulated media” and later even briefly blocked the then IT minister’s account.

Earlier, a posse of policemen in Delhi strutted into the Twitter office in an attempted raid, without realising it was a work-from-home regime and no staff was present.

After all the drama, the climax came on July 8 when the “hero” who was wielding his sword against Twitter and Facebook suddenly found the ground disappearing from under his feet.  And, that was the end of Ravi Shankar Prasad, the minister, brought to heel by his own leader Narendra Modi.

There was a brief flutter in the media, and then it was back to normal. All the talk of atmanirbharata, India’s much-touted muscular politics etc., had to take a bow before hard reality that today governs the world. And that reality is that the Indian government via Ravi Shankar Prasad had attempted to take on tech companies which are today so powerful they even control the narrative in Washington DC.

Also read: How Afghanistan is sliding back to dark days: Taliban atrocities a grim warning

Much of the Democratic Party is beholden to tech companies like Twitter and Facebook for the enormous support and funding it receives. And, it is the Democratic Party led by Joe Biden which is in power today. In 2020, Twitter invested $350,000 in lobbying in Washington DC, according to the website OpenSecrets.org. A year earlier, it spent not less than $1.48 million in lobbying. Facebook, on the other hand, spent around $17 million in 2019.

According to a New York Post report, Twitter CEO and co-founder Jack Dorsey donates only to the Democrats.

The so-called Big Tech represented by companies such as Facebook, Google, Amazon and Twitter have far more clout than traditional industries in the US, including in the defence and pharmaceutical sectors.

Though one doesn’t know at the moment what exactly transpired in the back channels between India and the US, it is fairly obvious that Prasad’s removal as IT minister had something to do with, if not a direct consequence of the Modi government’s Internet policy in recent months which had discomfited Amazon, Facebook and Twitter among others.

When US Secretary of State Antony Blinken visited New Delhi earlier this week where he met Foreign Minister S Jaishankar and Prime Minister Narendra Modi, besides a host of other officials there would have been far more talk than just what was revealed to the media.

Though speculative, no surprises if the Indian government’s tussle with US social media companies came up for discussion given their proximity to the US’s Democratic administration under Joe Biden. Eventually, the behind-the-door conversations will reveal themselves in slight shifts and moves in India’s policy in the coming weeks, if not months.

The media hyped Blinken’s visit hoping it would turn out to be a newsworthy event. But reporters had to remain content with standard statements on shared values, democracy etc. Blinken referred to dilution of democracy in the world meant as a swipe at China, and expressed support to Tibet. He threw in a warning to the Taliban, pointing out Afghanistan’s possible isolation if it indulged in violence.

Also read: Every democracy is a work in progress: Blinken during India visit

Though he avoided a direct answer to a question over a perceived dilution of democracy and human rights in India, the Biden administration views had already been made clear during the January 26 farmers’ protests. In response to India’s crackdown on Internet activists supporting the agitation the US had urged New Delhi to allow people unhindered access to the Internet as that was the hallmark of a thriving democracy.

The maiden India visit by Blinken was, in this context, important for more reasons than that touted for public consumption. It is well acknowledged that freedom and democracy in the US lexicon imply a free market in which the private sector is not interfered with. India’s new IT laws are perceived as a dilution of democratic freedoms by many, including even the United Nations.

For the US, historically, any threat to any of its businesses anywhere in the world is viewed by its governments seriously. There are innumerable instances where the US has even instigated coups and displaced governments that have not proved amenable to its diktat. At the moment too, there are countries in the crosshairs of the US administration. Iran is one, Venezuela is another, among others.

From the Indian point of view, any company irrespective of its transnational status must comply with local laws – none, least of all an Indian, can fault this perspective. But, there has been a history of arm-twisting India has been subject to when any such attempt has been made to reign in multinationals, especially of those headquartered in the US. And, India has succumbed to the pressure more often than not.

Remember the Bhopal gas tragedy in which the culprit, the US-headquartered Union Carbide, got away unscathed and its chief Warren Anderson allowed to escape from India? And, the Vodafone retrospective tax case where the government slapped a penalty of ₹25,000 crore on the company? Whether such a tax was justified or not is another issue, but the driver of this move, the then Finance Minister Pranab Mukherjee soon found himself relieved from his position and nominated for the post of Indian President. Once he was gone, the heat generated by the issue died down, much to the relief of Vodafone.  Eventually, it was settled legally in favour of the multinational.

The only time India mustered up courage to act against US multinationals was in 1977 when the then Industries Minister George Fernandes in the Janata Party government threw out Coca-Cola and IBM from the country. IBM returned in 1987, while Coca-Cola re-entered in the early 1990s, when India liberalised its economy.

In today’s globalised world with the US at the helm, only one country has shown it can take on the US better than others and that is China. Whatever Indian nationalists might say, the fact of the matter is that in the global stakes China is far more powerful than India.

Take the case of Afghanistan. The US acted without consulting India or even informing New Delhi that it was going in for a peace deal with the Taliban. When all was done and dusted, given their cold relationship, a worried India in recent weeks has tried to establish links with the Taliban and protect its hard-earned stakes in Afghanistan. To this end, Jaishankar met a couple of senior Taliban leaders discreetly in Doha and tried to stitch a new relationship.

Compare this with China. Earlier this week, China invited a full-fledged delegation of the Taliban to the northern city of Tianjin, feted the visiting members and openly negotiated with the much-feared Islamic group. China did not depend on the “good offices” of Washington DC to ingratiate itself with the Taliban. New Delhi, on the other hand, is hoping the Biden administration will do something to help protect India’s interests.

What has been overlooked is that India is seeking favours from a US administration that is closely linked to tech giants like Twitter and Facebook.  You can’t hope to be friendly with a government and antagonise those like Twitter who support that very government.

India’s prowess globally is minimal, if not non-existent. For, the simple truth is that a nation can rise up to be a big power in the world only when it has a robust socio-economic infrastructure and is genuinely self-reliant. India ticks neither of these checkboxes. On the contrary, Indians still suffer from abysmal governance with the COVID response being the latest example of that. The issue goes beyond any specific government but it seems to be only getting worse with each passing dispensation.

So, the next time around, a minister gets carried away by his or her own nationalist rhetoric, targeting a US-based multinational, chances are that the Damocles’ sword will come down on the individual sooner than later.