The brutal slaying of George Floyd in Minneapolis and the violence that followed in the cities of America, brings to memory something that happened in the country some 29 years ago with a person called Rodney King.

On that fateful year in 1991 in the city of Los Angeles, California, King was chased by police officers in their cruisers; and when he finally stopped, they dragged him out of his car and literally tore him up to pieces. Four White police officers beat the hell out of King while another dozen or so were laughing around and passing comments on the brutalization that was happening.

But Los Angeles went up in smoke on the afternoon of April 29, 1992 when a jury of 12 — nine Whites, a biracial, one Latino and an Asian — returned the verdict of “not guilty” against the four accused white officers. The violence, looting, arson and vandalism went on for about a week before things were brought under control. But not before 50 people had died and some 2,000 injured.

What is happening in America today seems to be a repeat of what took place nearly three decades ago. The only difference being that seemingly little has changed in the country — that African Americans continue to be at the receiving end when it comes to law enforcement. The brutality unleashed on Floyd that eventually led to his death is very similar to what was done to Rodney King, except that King survived to come out and call for calm when violence was ripping apart his favorite city. “People, I just want to say, you know, can we all get along, can we get along,” King said outside of a court house.

Floyd is dead and supporters of the civil rights movement and those staunchly behind the African American community saying that Black Lives Matter wonder if anything can be done at all to rid a nation of a virus that is worse than the coronavirus. A virus that has been deluding a vaccine or an anti-dote for the last several decades, long after civil rights were formalized in a country that faced the shameful legacy of slavery.

And what was Floyd’s crime? Trying to pass on a fake US$ 20 bill to perhaps buy candy, cigarettes or whatever. And were the police officers pinning him down know for sure that Floyd knew that it was a fake currency that he was exchanging? The world will hear only one side of the story for Floyd is no longer around.

Even more pathetic is that of a leadership that paid a customary mourning message to the family of Floyd, and a routine statement of how America abhors and is sickened of what had taken place. But in the same breadth Donald Trump called protesters “Thugs”, berated governors of states as being weaklings, threatened to let loose vicious dogs if anyone dared to scale the compound of the White House, bringing in troops of the elite 82nd Airborne Division to the nation’s capital and even apparently putting on alert military aircraft. For what? Protests around the White House near the Lafayette Park became so violent that the Secret Service had apparently taken President Trump to the basement for safety! 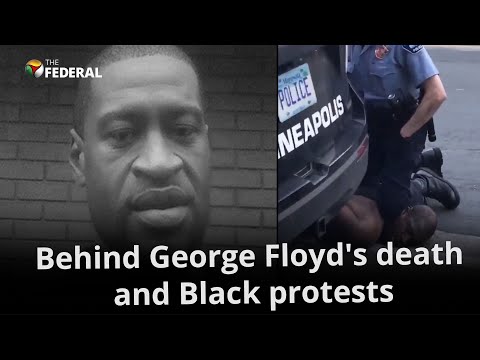 And as things get the way they do in the Trump administration, the President is said to be seriously thinking of invoking the Insurrection Act, that would enable him to send the military to take charge. Unnamed administration officials have said that the President is stepping down on the threat to send in the military but in the same breadth are maintaining that the last word on the subject has not been said.

The Pentagon is indicating that it has a lot of reservations on the use of military to quell civilian unrest; and apprehensions are there even within the Republican Party. Lindsey Graham, Republican Senator from South Carolina and one of Trump’s staunch supporters has said that invoking the Insurrection Act should be the last resort. “I don’t think the Pentagon’s keen on getting brought into this unless they absolutely have to. We need to restore order, but using active duty military troops in circumstances like this is a fairly rare occurrence”, he said. And fellow Republican Senator John Thune of South Dakota remarked, “You want to de-escalate rather than escalate.”

After being hunkered down in his basement home in Delaware, the presumptive Democratic nominee, Joseph Biden, lashed out at President Trump for being insensitive to what the issue is all about. “The President held up the Bible at St. John’s Church. I wish he opened it once in a while, instead of brandishing it. If he opened it, he could have learned something; that we’re all called to love one another as we love ourselves. It is really hard work. But it is the work of America. Donald Trump isn’t interested in doing that work,” Biden said. He also said that in addition to the Bible, Trump may also want to open the U.S. Constitution. “If he did, he’d find the First Amendment. The Presidency is a big job. Nobody will get everything right. And I won’t either. But I promise you this. I won’t traffic in fear and division. I won’t fan the flames of hate,” he said making his statement.

Forgetting for a minute that their President had failed to calm the country by appearing on prime time the very day all hell broke loose, the Trump campaign was quick to take shots at the former Vice President Biden accusing the latter’s campaign of using resources to free looters on bail. Katrina Pierson, a campaign advisor to Trump stressed that Biden has “obviously made the crass political calculation that unrest in America is a benefit to his candidacy. Over the course of his public life, Joe Biden has used the politics of racial division when they suited his needs and he is doing it again.” What people like Pierson forget, is that President Trump instead of quickly putting out the fires of hatred only added more fuel by repeating tasteless remarks of a Police Chief in the 1960s and then turning around and pretending he has never heard it.

Anger and outrage in America over police brutality against Blacks and minorities happen every few years as does the rioting that accompanies the cases. But there is the aspect of the criminal justice system that refuses to dismantle either by itself or through the nudging of well-intentioned politicians who have come to lead America, be it Republic or Democratic; and some others like President Trump, in order to fire up their base, have held on to antiquated ideas and beliefs and refuse to come to terms with reality. “Go Home” is what they have to tell any person from a foreign land if they are in disagreement; and the inculcation of ideas and stereotypes have not only kept up the membership of the Ku Klux Klan, but in the process also retained the violence against African Americans and minorities by law enforcement.

According to an analysis in The Washington Post since 2015 if deaths per million in police shootings is seen as a metric, Blacks account for 30, Hispanics at 22 and 12 for Whites. The Black population of America is 13 per cent and the Whites at 72 per cent.

But here is a small bit of information that people like Trump need to keep in mind: the protests taking place in America are not confined to the African American community as it happened during the Rodney King riots in 1992. “The protests and marches today you see are multiethnic, multicultural, even multigenerational. And the allyship is something that is more pronounced now than it perhaps once was. I think a lot of people, when they saw that video of George Floyd, who weren’t in the black community, felt agony. And I think this time around, more people feel that sympathy and empathy for members of the black community and are standing in solidarity with them,” says Law Professor Jody David Armour, who has taught at the University of Southern California at Los Angeles. And for President Trump to think or even believe that every person out in the street is a looter, hoodlum or a terrorist is surely living in a world of his own.

Related news: When ‘looting and shooting’ and ‘goli maaro’ by leaders need to stop