In the autumn of 1947, Muhammad Ali Jinnah, the Quaid-e-Azam of Pakistan, sent a request to Kashmir’s Dogra king, Hari Singh, for making arrangements for his holiday in the Valley. Jinnah, 71 and sick with tuberculosis, believed Kashmir was destined to fall in his basket like a ‘ripe fruit’ and the Maharaja would be more than eager to host him. But, he was aghast when the Dogra ruler refused to entertain the ‘Father of Pakistan.’

Alarmed by the Maharaja’s refusal to allow him a holiday in Srinagar, Jinnah became impatient. He summoned his Prime Minister Liaqat Ali Khan and asked him to do something to solve the Kashmir problem.

Over the next few weeks, the Pakistani political leadership devised a series of strategies to make Hari Singh, who was intent on making his verdant valley the ‘Switzerland of East’, accede to Pakistan. The centre-piece of the plan was ‘Operation Gulmarg’, a tribal invasion of Kashmir by lashkars (battalions) from Northwest Pakistan’s prominent tribes—the Mahsuds, Afridis, Wazirs and Swatis—led by Brigadier Akbar Khan, nicknamed General Tariq by the political establishment.

Eager to assuage Jinnah’s ego and to keep Kashmir from acceding to India, the Pakistani political leadership, after a meeting in Lahore attended by the country’s Prime Minister Liaqat Ali Khan and his senior ministers, set a date in late September as the D-day for the invasion. But, the invasion ran into an unexpected hurdle at the very beginning.

A Bridge Too Far: Lust for loot, denies Pakistanis Eid in Srinagar 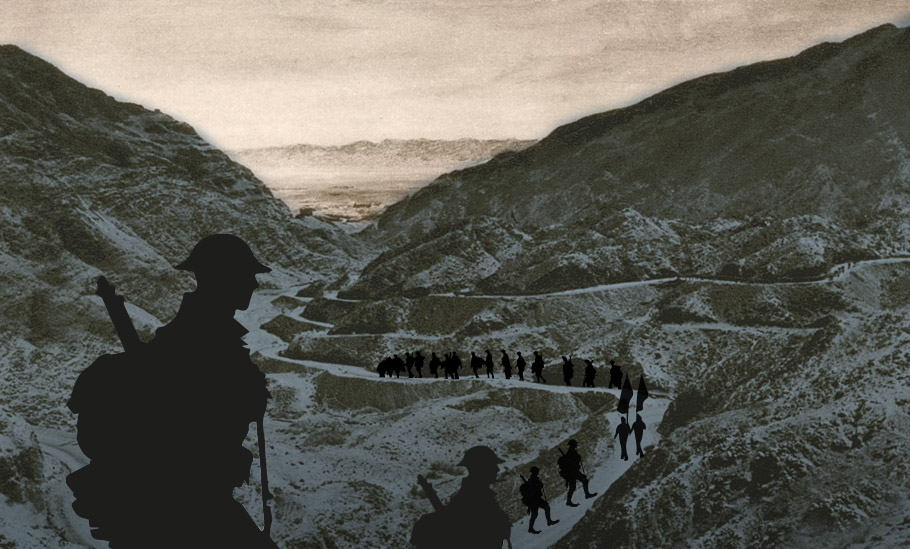 I Where is Khurshid Anwar?

In the last week of September 1947, Brigadier Akbar Khan, the Sandhurst graduate assigned the responsibility of commandeering the Pakistani regulars and tribal lashkars mobilised for the invasion of Kashmir, wasn’t the only one asking this question.

For the past few days, Khan had been impatiently waiting for Anwar, an ex-Indian army soldier cashiered on charges of embezzlement, to give him a heads-up on ‘Operation Gulmarg.’ But, Anwar, a self-anointed ‘Major’ seemed to have fallen off the map like an autumn leaf.

As part of ‘Operation Gulmarg’, three teams of invaders led by Pakistani regulars in plain clothes were to blitz through Jammu and Kashmir from three separate directions and link up at Srinagar. Anwar, a leader of Muslim’s League’s militia inspired by Benito Mussolini’s Black Caps was to lead the most important of these attacks. His lashkar of tribal men—the northern force—was to enter Kashmir via Muzzafarabad, make lightening advances through Uri and Baramulla, and reach Srinagar within 24 hours of the start of the invasion. Major Zaman Kiani, an INA veteran, was to cut through Kathua in the south and move upwards to bolster the northern force. Another force was to reach Gulmarg and then enter Srinagar via Badgam. 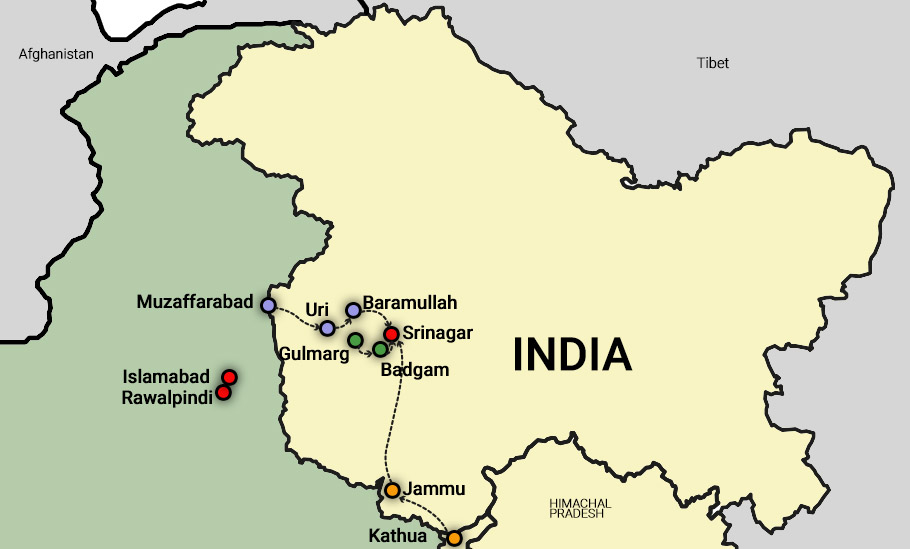 Brigadier Khan had joshed while discussing the invasion that the lashkars would have their dinner in Srinagar’s Hari Mahal and announce to a stunned world that Kashmir was Pakistan’s. But, just a few days ahead of the D-day, Anwar had set out to accomplish a mission Kashmir of his own—his honeymoon with a Kashmiri Pathan girl he had decided to marry before the start of ‘Operation Gulmarg’, believing he might not find enough time for it once the invasion began.

By the time Anwar returned from the honeymoon, it was already October. Left without a choice, the Pakistani establishment set a new deadline for the tribal invasion of Kashmir—October 21, 1947. Even this was destined to be postponed, albeit just by a day.

In the first three weeks of October, jihad fever burnt through north-western Pakistan. Aided by the Pir of Manki Sharif, a roly-poly man with thousands of followers among tribals, Anwar managed to convince every major tribe to put together at least one lashkar for the invasion with the purpose of waging a jihad and being rewarded with loot, plunder and women.

Historians Larry Collins and Dominique Lapierre were to recount this mobilisation in graphic detail a few years later in their bestseller, Freedom At Midnight: “Within hours, in the mud-walled morkhas, or compounds, their villages, in encampments, in Landi Kotal, along the Khyber…the Pathans passed the ancient call of Islam for holy war, jihad. From bazaar to bazaar, secret emissaries began to buy up stocks of hard tack and gur, a mixture of corn meal, ground chickpeas and sugar. A few mouthfuls of that mixture taken two or three times a day could sustain a Pathan for days.”

Brigadier Khan, director of the Weapon and Equipment directorate at the General Headquarters, requisitioned 4000 rifles meant for the Pakistani police to arm the lashkar. Once a fighter was recruited by the Pirs of Manki Sharif and Wana, he was sent to the nearby police station, given a rifle and asked to report for training near Abbottabad and Murree, two prominent towns east of Rawalpindi. The training camps were set in secret locations so that the British controlling the Pakistani army don’t get to know of the mobilisation. In no time, around 5000 tribals (qabalis) were assembled at Batrasi, across the Kashmir border, ready to launch a lightening attack.

The shortest route to Srinagar from Delhi, before the Partition, was through Rawalpindi. Those interested in visiting the Valley either flew, or took a train, to Pindi, and from there drove along the Jhelum river on an all-weather pucca road to the state’s capital—a journey that took around six hours.

The other route—the one that passed through Pathankot and Jammu—was a treacherous drive through a road that cut through the Banihal Pass and the Pir Panjal range that formed a natural divide between the Valley and the Jammu region. Even during the summers, when the road was not skiddy because of rains, or shut because of snowfall and landslide, the journey to Srinagar took several days.

On paper the plan was perfect. Lashkars gathered at the border would seize the town of Muzzafarabad with the help of Muslims in the Maharaja’s army. Once Muzaffarabad was secured, the invaders would advance towards Srinagar, barely a 100 miles away, and force the Maharaja to accede to Pakistan. Once Srinagar fell, Jinnah would send his army officially to take control of the new province and announce to the world that the K in Pakistan was finally in his lap.

On October 22, soon after midnight, without firing a shot, Khurshid Anwar’s lashkar crossed the bridge over the Neelam River and rolled into Muzzafarabad on lorries arranged by Brigadier Khan. By the time dawn broke, bearded men in black turbans and footwear made from grass ropes were all over Muzaffarabad.

Anwar was pleased by the progress. With an open, unguarded road ahead of him, he could now drive along the Uri-Baramulla-Srinagar axis and complete the conquest of Kashmir within a few hours.

“Let’s drive to Srinagar. We will be there by evening,” Anwar shouted over chaotic slogans from thousands of tribals in black turbans and blankets, armed with rifles, shotguns, knives, axes and sticks. But the Pathans in his lashkar had a different plan. They would just not listen to their “commanding officer.”

Once they had looted every house and shop, the tribals loaded their stuff into lorries and drove back across the border to stash it away back home. Many took Sikh and Hindu women with them, either to keep as slaves or mistresses or trade in the bazaars of Peshawar.

This lust for loot was to deny Jinnah the dream of celebrating the Eid of 1947 in Srinagar’s Hari Mahal.

The Dogra ruler of Kashmir maintained a small army of around 9000 personnel. By October, almost 60 per cent of his force had mutinied and joined the Pakistani invaders, either as fighters or as informers and guides. The few who remained had already been sent to other regions of the state to quell rebellions by Muslims demanding integration with Pakistan.

When news of the tribal invasion reached Srinagar, Hari Singh summoned his chief of staff, Brigadier Rajinder Singh Jamwal, and ordered him to defend the state to the last man. The 48-year-old Brigadier saluted his chief and left the palace to personally lead the defence—right down to the last man. 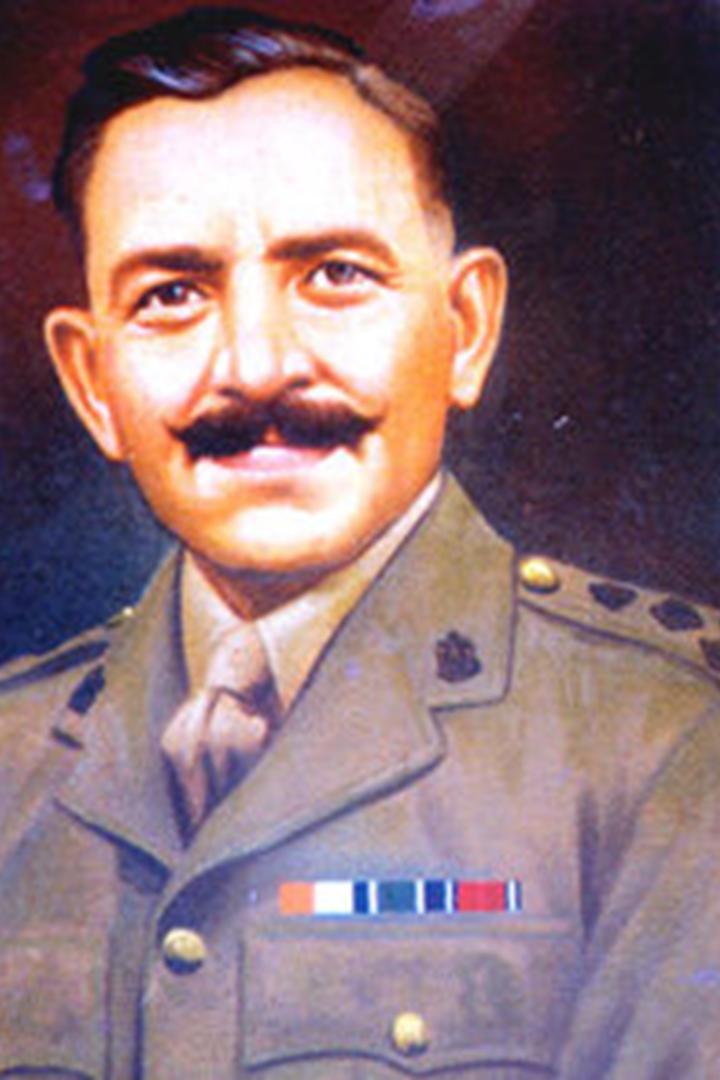 Rajinder Singh faced two immediate problems. Since some of his commanding officers had been killed by rebellious Muslims in the army, Rajinder Singh could only trust the Dogra soldiers in the state’s army. Also, since the ruler of Kashmir had never imagined he would have to fight a war, there wasn’t a single vehicle available to rush the forces to the battlefront.

By evening, Rajinder Singh was able to put together a group of around 200 soldiers armed with rifles and patrolling sticks. Requisitioning private vehicles available in Srinagar, he left for Muzzafarabad to fight a battle that would be compared by Sardar Patel’s secretary VP Menon with the heroics of King Leonidas and his 300 men at Thermopylae.

The convivial gathering wasn’t aware that while they were feasting and celebrating, Brigadier Rajinder Singh’s brave men were pulling down a bridge that linked Muzzafarabad with the nearby town of Uri.

The combined effect of the anarchy within the lashkar and Rajinder Singh’s actions was to help buy India precious time to tie the future of Kashmir inextricably with its own destiny.

Next: The saviour of Kashmir