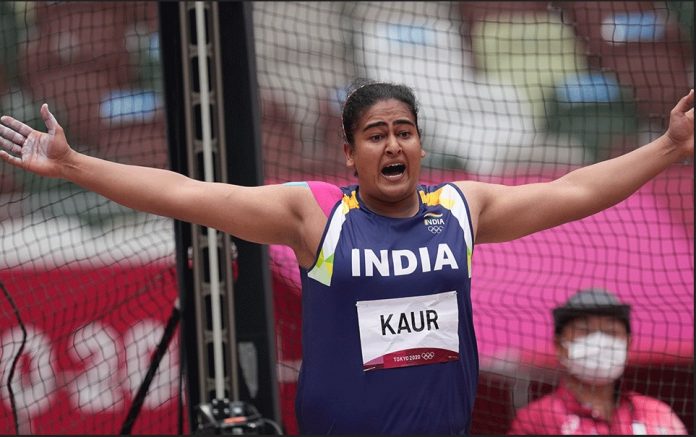 Kamalpreet Kaur qualified for the finals with a throw of 64m in her third and final attempt. PTI Photo

Little was known about Kamalpreet Kaur until July 31. The brawny discus thrower from Punjab made one of the best performances by an Indian at the Olympics on Saturday (July 31) as she qualified for the finals with a throw of 64m in her third and final attempt. She became one of the only two automatic qualifiers for the final round, the other being American Valarie Allman (66.42m).

The final will be held on August 2.

Kamalpreet has been in a good form this season. The 25-year-old National record holder is the first Indian in athletics to qualify for the final in Tokyo.

But former Asian Games champion Seema Antil-Punia, the other Indian in the event and was competing in her fourth Olympics, failed to make the cut with just 60.57m in the qualification round where the automatic qualification standard was 64m. Seema had qualified for Tokyo with 63.72m at the inter-Nationals in Patiala last month.

Kamalpreet became the 11th Indian, and the second woman discus thrower, to qualify for an Olympic final.

The Punjab athlete has not competed in the Asian Games or Commonwealth Games. She has the personal best of 66.59m achieved n June. Cuba’s World champion Yaime Perez (63.18m) and Croatia’s Olympic champion Sandra Perkovic (63.75) are among those who have made it to August 2 final.

There were big surprises too with Dutchwoman Jorinde van Klinken, this year’s world leader with 70.22m, failing to qualify as she could manage only 61.15. Also missing the cut were Cuba’s World Championship’s silver medallist Denia Caballero, who could just throw 57.96m, and 2016 Rio Olympics silver medallist Melina Robert-Michon, who had the best throw of 60.88 in the qualifiers.

Kuldeep Singh, the father of Kamalpreet, missed his daughter’s performance in the qualifying round as he was busy working at his farm, India Today reported. Kamalpreet comes from Badal village in Sri Muktsar Sahib, Punjab.

“When I was working at my farm, I started getting calls and messages and then only rushed back to my house. I will watch highlights,” said Kamalpreet’s farmer-father.