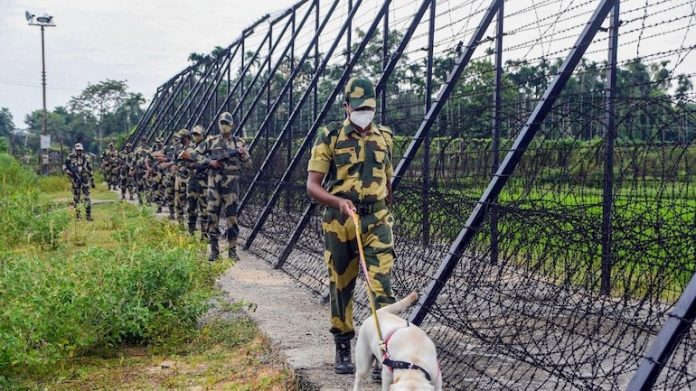 The BSF said that the step was taken to "give uniformity to jurisdiction" across the states and help them to curb cross-border crime more effectively. PTI photo

In what is being viewed as an attack on the federal structure of India, the Centre has extended the jurisdiction of the Border Security Force (BSF) to freely carry out searches and make arrests within a 50 kilometre stretch into states that share international borders with Pakistan and Bangladesh.

Punjab, West Bengal and Assam are the three states which will be particularly affected by this new amendment since earlier the BSF’s jurisdiction was limited to within a 15 kms stretch inside the states.

This new rule has come into force from October 11 after the Ministry of Home Affairs amended the BSF Act, 1968, said media reports. Under Section 139 of the BSF Act, the central government has the authority to notify the area and extent of operation of the BSF from time to time, said reports.

Before this amendment came into play, BSF could only officially venture up to 15 kms inside Punjab, West Bengal and Assam. This limit however was fixed at 80 kms in the case of Gujarat, and 50 kms in Rajasthan, said a Deccan Herald report. But now, the extension limit has become uniform for all the states.

What powers will the BSF have under this new rule?

The DH report further goes on to explain that the BSF will now have carte blanche to enter a 50 km stretch into Punjab, West Bengal and Assam and execute the powers of search and seizure to prevent any offence under the Passport Act, the Registration of Foreigners Act, the Central Excises and Salt Act, the Foreigners Act, the Foreign Exchange Management Act, the Customs Act or of any other cognisable offence punishable under any other Central Act.

The BSF can also arrest any person who has committed offences under these laws. Opposition parties from West Bengal and Punjab have vehemently lashed out at this new amendment and called it “an attack on federalism” and an “attack on the federal structure” of the country. The WB and Punjab government have in fact demanded its withdrawal since it is an infringement on the rights of the state.

Punjab Chief Minister Charanjit Channi had tweeted that he strongly condemned the GoI’s unilateral decision to give additional powers to BSF within the 50 km belt running along the international borders, which he termed is a direct attack on federalism. He urged the home minister to rollback this “irrational decision”.

I strongly condemn the GoI’s unilateral decision to give additional powers to BSF within 50 KM belt running along the international borders, which is a direct attack on the federalism. I urge the Union Home Minister @AmitShah to immediately rollback this irrational decision.

According to media reports, the TMC spokesperson Kunal Ghosh too hit out at the move saying that they oppose it. They claimed that it is an infringement on the rights of the state. Moreover, he alleged that the WB government was not consulted before such a decision was taken and questioned the motive behind the “sudden need of the government” to make this move.

Ghosh added that if the BSF wanted to control security of the borders and conduct searches they could do it along with the state police which has been the practice for years.

Meanwhile, a senior police official was quoted on NDTV alleging that the BSF doesn’t have a “good track record on human rights” in border villages. The official calling this as a “very politically sensitive move” said that the BSF have not been able to safeguard the borders though that was their primary job. Further, the official expressed concern that this move could also lead to more confrontations between BSF forces and local police.

The BSF meanwhile issued a statement defending this move stating that the amendment effected on October 11 establishes “uniformity” in defining the area within which Border Security Force can operate… Secondly, the statement said that this move will enable them to enhance their “operational effectiveness” in curbing trans-border crime and to an extent of 50 kms from the international boundary within the states of Gujarat, Rajasthan, Punjab, West Bengal and Assam, running along the borders of India.

A BSF official told DH that they will not have to wait for local police to help them intervene and can take prevention action on time.