Meet Shanmuga Subramanian (33), a mechanical engineer from Chennai who has become the talk of the town for finding the debris of the Vikram lander that crashed on the Moon when scientists from ISRO were still trying to locate it.

“I took this up as a challenge, since NASA and ISRO had been searching for it too,” Hindustan Times quoted Subramanian as saying.

Subramanian, who was based in Chennai, had been following updates on the Chandrayaan-2 mission just like every other science enthusiast. 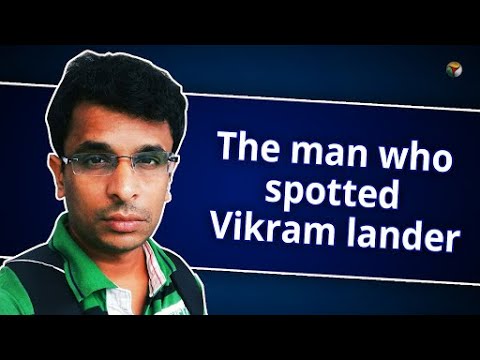 Vikram lander of Chandrayaan-2 was supposed to have executed a soft landing on the Moon, and the entire nation had waited with bated breath on September 7, 2019 to see if Vikram would be able to pull off a soft landing successfully.

However, the scientists from ISRO lost contact with Vikram minutes before it landed. They soon confirmed that Vikram had indeed crashed on the Moon instead of landing softly, and efforts were on to locate the lander.

“I don’t think Vikram lander would have made such an impact on the minds of the Indian public if it had landed successfully. Since, it was lost, there was a lot of discussion in public forums regarding what malfunctioned,” Subramanian told Hindustan Times.

On September 26, NASA released a mosaic image of the site taken on September 17, inviting the public to find signs of the lander by comparing it with images of the landing area before and after the crash.

On October 3, Subramanian, one of the many enthusiasts trying to locate the lander, tagged the twitter handles of NASA, LRO and ISRO in a tweet, asking, “Is this Vikram lander? (1 km from the landing spot) Lander might have been buried in Lunar sand?”

On November 17, he further zeroed in on his observations and tweeted the possible crash site of the lander. “This might be Vikram lander’s crash site (Lat: 70.8552 Lon: 21.71233) & the ejecta that was thrown out of it might have landed over here (The one on the left side was taken on July 16th & one on the right side was from Sept 17),” he said and added the images.

As it turned out, Subramanian was spot on with his inferences, and now NASA has lauded him for finding the lander. “Thank you for your email informing us of your discovery of debris from the Vikram lander. The LROC team confirmed that the location does exhibit changes in images taken before and after the date of the landing,” said deputy project scientist Lunar Reconnaissance Orbiter mission John Keller in an email to Subramanian, an image of which the latter tweeted.

“NASA has credited me for finding Vikram Lander on Moon’s surface Vikram Lander Chandrayaan-2,” Subramanian said in a tweet on Tuesday (December 3).

Subramanian said that he had always had a passion for space. He also said he had put in a lot of effort and that he was helped by netizens on Twitter and Reddit.

A top NASA scientist said that Subramanian’s work was completely independent. “The story of this really amazing individual (who) found it, helped us find it, is really awesome,” news agency IANS quoted NASA’s Noah Petro as saying.

“He went through the image, looking pixel by pixel and found that spot,” Petro said, according to NDTV.