The involvement of private players, like SpaceX, in the field of space exploration is something that the Indian Space Research Organisation (ISRO) can learn from the National Aeronautics and Space Administration (NASA) to bring down the costs of its space programmes, which may turn out as a game-changer for India’s space tryst.

SpaceX’s involvement has given unprecedented cost benefits to NASA: its per-astronaut cost has come down by several folds while the spacecraft expenditure has reduced to just $1.7 billion from $27.4 billion, according to the audit data by NASA and The Planetary Society.

Meanwhile, the ISRO currently outsources only the manufacturing works to private sectors, and enhanced participation of such players may add fuel to the country’s space exploration programmes.

What benefit does SpaceX have over others?

SpaceX CEO Elon Musk has revolutionised the space technology sector with his innovative technological solutions. The two of SpaceX’s strategies that have helped NASA reduce costs are technological innovations and the tactic of providing multi-vendors option.

The California-based firm has not only reduced the cost of sending an astronaut into space but also brought down the expenditures on spacecraft and program development.

Moreover, the innovation of reusable rockets has given SpaceX the benefit over other players. Reusable rockets have resulted in drastically plummeting costs for space transportation. Along with that, the use of 3D printing technology and mass production have further helped bring down the costs. 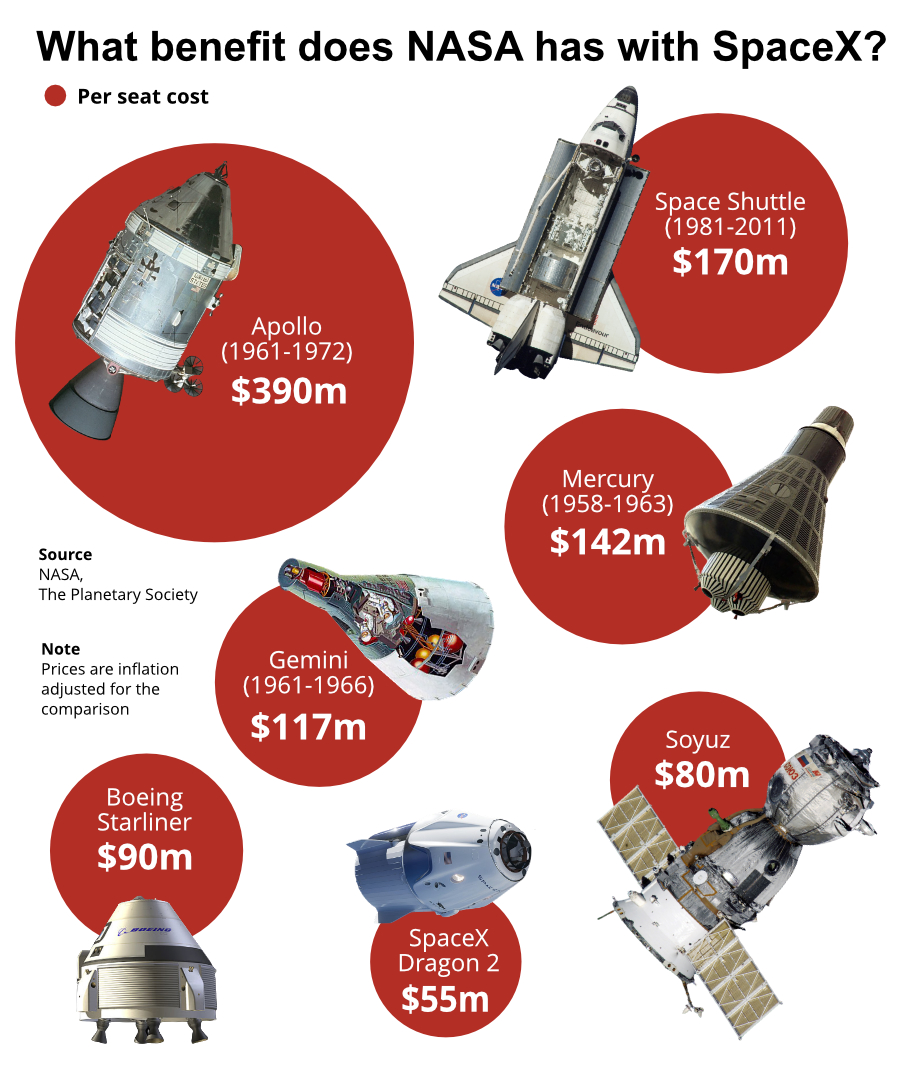 Sending astronauts into space has always been a costly affair, but SpaceX’s involvement has brought about a drastic fall in such expenses. The per-seat expenditure for sending an astronaut for a mission has come down to $55 million as compared to Soyuz, a Russian spacecraft, which would cost around $80 million per seat.

The Space Shuttle, which was used by NASA for the longest period, around 20 years, would incur a cost of $170 million per seat. The Apollo, used for lunar landing mission in the late 60s, would cost a whopping $390 million per astronaut. Boeing provides the same at $90 million. 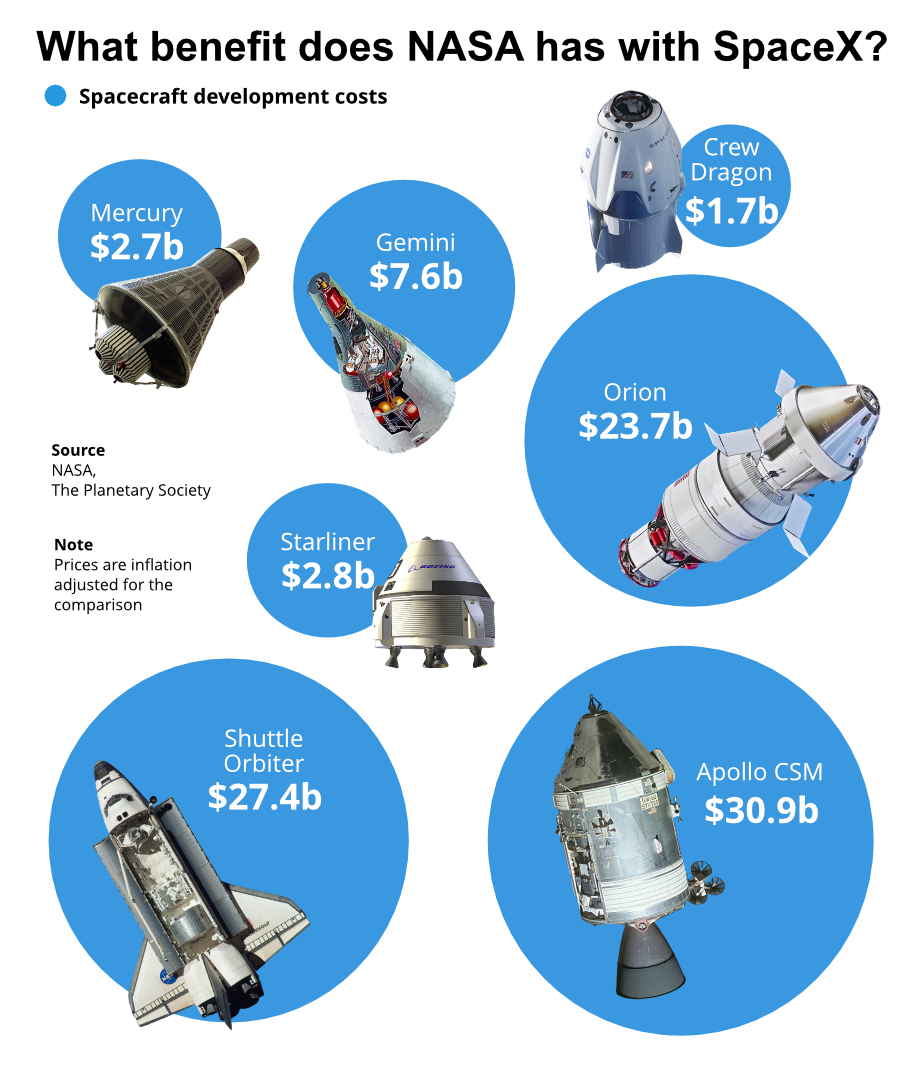 Another strategy of cost reduction and efficiency, according to Musk, is the involvement of multiple contractors. In this case, Boeing Starliner was another competitor of SpaceX in Commercial Cargo & Crew (CCC) program. But, the latter won the contract.

Musk said that contracting outcome-based work would only give better results. He explained it in his tweet saying, “Outcome-based contracting with multiple competitors is vastly better than cost-plus (especially if sole-sourced), as the former rewards results & latter rewards waste. Outcome contracting should be applied broadly within government. The difference in results will be incredible.”

Outcome-based contracting with multiple competitors is vastly better than cost-plus (especially if sole-sourced), as the former rewards results & latter rewards waste. Outcome contracting should be applied broadly within government. The difference in results will be incredible.

If we take a look at the spacecraft development cost, a similar trend can be seen. The Apollo cost went up to $30.9 billion while NASA had to spend $27.4 billion on the Shuttle orbiter. On the other hand, the Crew Dragon cost was just $1.7 billion. Orion, the latest space capsule developed by NASA, was priced $23.7 billion.

The CCC program, aimed at providing cost-effective and reliable space transportation service, seems to have served its purpose.

SpaceX has given NASA a benefit on overall program development costs too. NASA had to spend around $7.6 billion on the CCC program that has been outsourced to private players. On the other hand, for Orion, only the spacecraft cost NASA approximately $23.7 billion. The Shuttle Orbiter program had an expenditure of over 50 billion dollars. 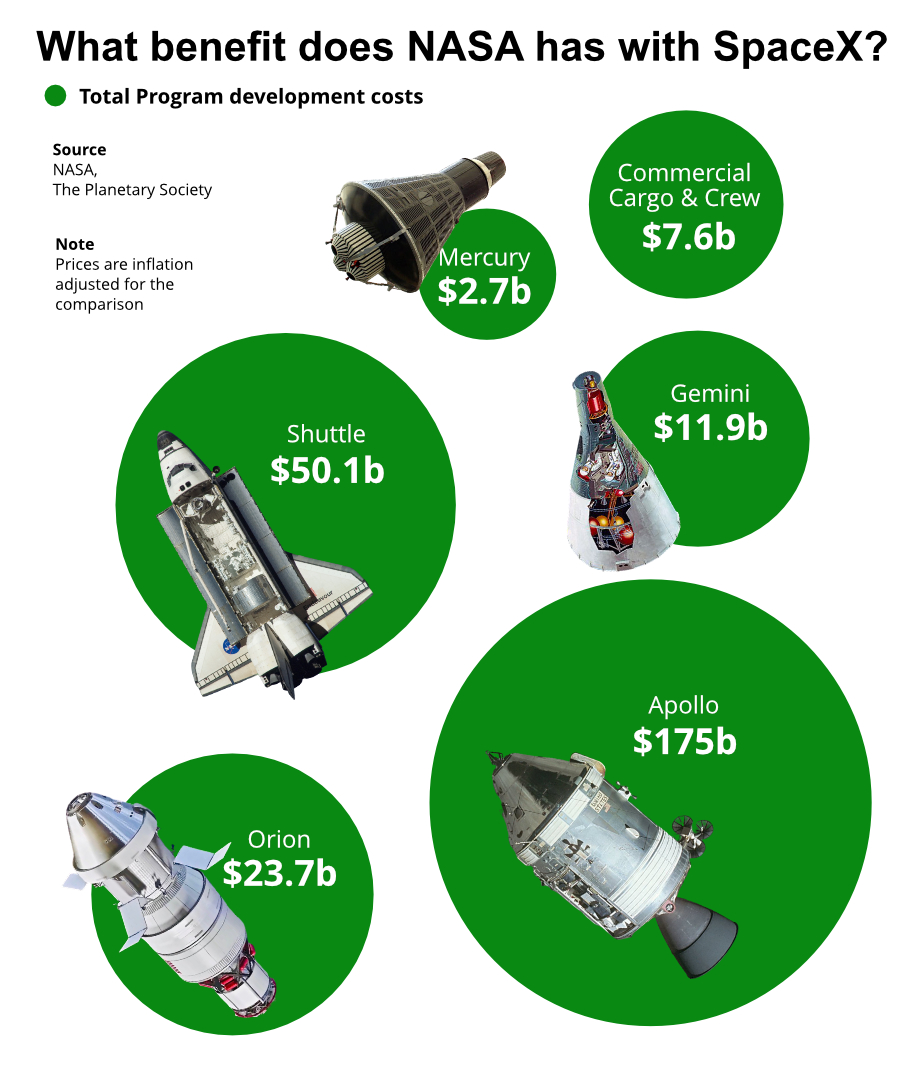 SpaceX proved that it can provide a cost-effective and reliable space transportation system with the success of a recent mission under the CCC program. NASA administrator Jim Bridenstine, after the success of the SpaceX mission, signalled further involvement of the private companies into other programs of the space organisation.

India is also looking forward to the inclusion of private players in the space sector on a large scale. Giving the example of PSLV rocket launcher, Bellatrix’s Karanam says, “ISRO claims about 80 per cent of manufacturing works of PSLV is done by private firms while the rest 20 per cent by it. All components are made by various companies based on private contracts. ISRO does the designing and initial works, and the rest is manufactured by private companies.”

Djokovic back at top of ATP rankings; Sabalen...