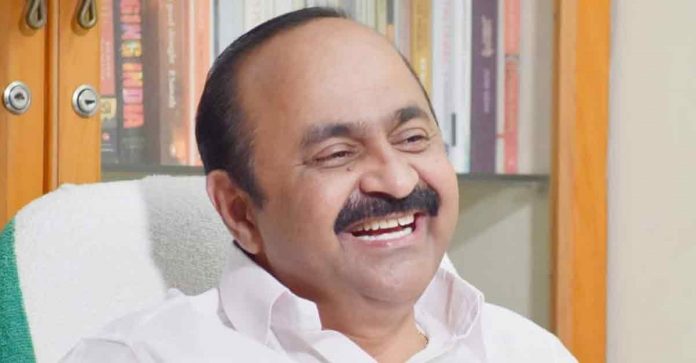 56-year-old Satheesan has won from Paravur constituency by 21,963 votes  — his fifth win in a row

The Congress in Kerala, which has faced a debacle of sorts, is all set for a total makeover.

If a source is to be believed, the Congress is set to infuse the much-needed young blood, pushing some of the old guards to the sidelines. As a first step, VD Satheesan, one of the most outspoken leaders in the party, has emerged as the top contender for Opposition Leader, a post now with veteran Ramesh Chennithala.

Satheesan has won from the Paravur constituency by 21,963 votes  — his fifth win in a row. In fact, every time last 20 years, he steadily kept increasing the margin.

As per insiders, VDS, as he is fondly called, has emerged as the unanimous candidate for the role of Opposition Leader.

“We all have decided not to talk in public about any internal developments at a time when the party has suffered one of our biggest setbacks. We are trying to regroup ourselves because we are confident we have many young and vibrant leaders to take the Congress forward. It’s not impossible to rebuild the party and get back to winning ways. As of now, VDS is the most suitable candidate to take over as Opposition Leader,” says a Congress leader from a Southern district.

Why VDS? Explains another Congress MLA, seeking anonymity, ”VDS is one of the most popular young leaders in Kerala irrespective of party affiliations. His speeches (on multiple issues) in the Assembly were so effective that even the ruling front did struggle to defend. Plus, his clean image is a big bonus. If it’s not him, who else?”

In the recent elections, the Congress-led United Democratic Front (UDF)  bagged just 41 seats, one of its worst election figures ever.

According to insiders, the decision to overhaul the party is expected in a week.