Shiv Sena chief Uddhav Thackeray has assured that he will deal with the “murderers of Aarey forest” in the best possible way, after a victory after the October 21 Maharashtra Assembly elections, which his party was fighting in alliance with BJP.

Hitting out at the Mumbai Metro authorities for felling trees in Aarey Colony, his son and Sena’s Worli candidate Aaditya Thackeray too came out in support of environmental activists who have been detained or arrested.

Thackeray junior requested Maharashtra Chief Minister Devendra Fadnavis to ask the city police not to file cases against the protesters who tried to stop the tree cutting.

“We would be hypocritical then at the United Nations if we do this (arresting environmental activists). The use of a large number of police personnel, hacking of trees in the dead of the night, even after winning in the court (then why not in broad daylight) and detention of peaceful protesters and citizens. Who is authorising this? during the code of conduct? all these powers handed to MMRC (Mumbai Metro Rail Corporation)?” he asked.

The Thackerays’ comments come in the wake of felling of trees in Aarey by the Mumbai Metro to make way for its car shed, hours after the Bombay High Court dismissed petitions challenging the decision to allow felling of trees.

Environmental activists led a massive protest against the cutting of trees and clashed with police. At least 29 protesters being arrested after 60 were detained. 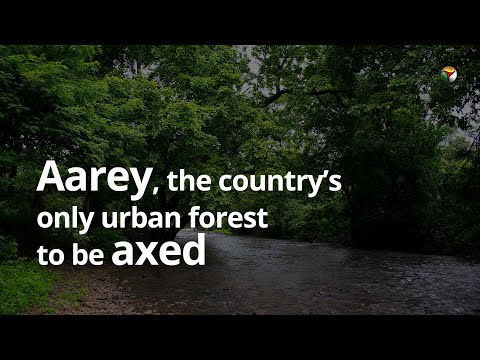 In Lucknow, Environment Minister Prakash Javadekar cited a Bombay High Court order to defend the Mumbai Metro Corporations move to fell trees in Aarey Colony, saying it was “not a forest”.

“Basically the high court has decided and ruled yesterday that it is not a forest,” Javadekar told reporters here. “You cant fell anything that is forest.”

Asserting that there was never a “big brother” in the BJP-Shiv Sena alliance, senior BJP leader Prakash Javadekar exuded confidence that the two parties together will win more than 200 seats in the 288-member Maharashtra Assembly in the upcoming polls.

BJP is a party that works 24×7 and the moment 2019 elections ended, it started preparing for the next election, the Union minister said in an interaction with PTI journalists at the news agency’s headquarters here.

“The Congress party could not find a replacement of its president for two months. Within those two months, we had a new working president in place, we launched our new massive membership drive and added eight crore members, making it a 19 crore-member party. It is huge,” he said.

“So, we are working on the ground and our forte is booth. We remain among the people 24/7 for which people reward us,” he asserted.

Asked about oppositions claim that the BJP is raising the abrogation of Article 370 provisions in state polls to divert attention from local issues, Javadekar said it is the people who are talking about the issue as it caught their imagination.

He also said the media created the jargon of “big brother” in the BJP-Sena combine and asserted that no one in the alliance declared so.

Javadekar also expressed confidence that the two parties together will comfortably get a majority in the Maharashtra Assembly polls.

“We are fighting as an alliance and the alliance will get more than 200 seats. We are very confident,” he said.

Of the 288 assembly seats, the Shiv Sena will contest 124, smaller NDA allies such as RPI and RSP will contest 14, and remaining seats (150) will be fought by the BJP.

The Sena is also expected to get two berths in the Legislative Council from the BJP quota.
The Sena and BJP had contested the state polls separately in 2014.

Assembly elections in Maharashtra besides Haryana will be held on October 21. Counting will take place on October 24.

8:13 PM, 1 February, 2023 0
The Budget doesn't augur well for the super rich as there is an attempt to plug loopholes on many tax avoidance measures