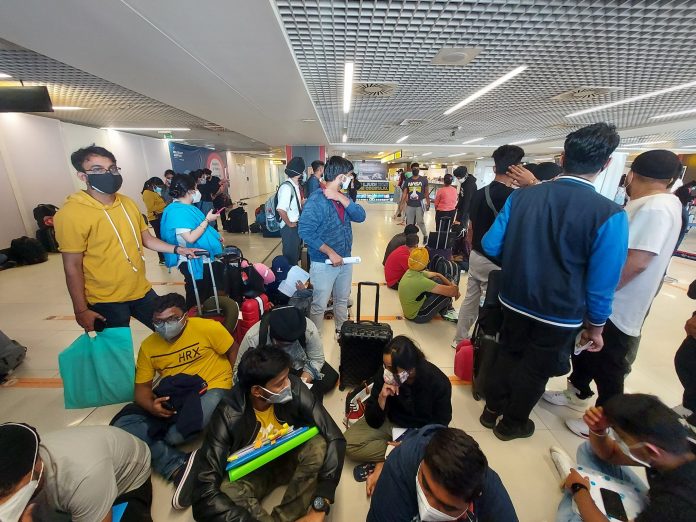 More than 200 Indians, who were largely students, were stranded at Belgrade airport for hours because of a sudden seven-day mandatory quarantine introduced from July 9. Pic: @RealNick05

Indians can no longer use Belgrade as a transit-stop to travel to other international destinations, which had banned direct entry of passengers from India, such as USA, Canada, Saudi Arabia and UAE. This has led to a lot of problems for scores of Indians, including a Delhi-based chess champion, Kabir Wadhawan, whose travel plans to attend a chess tournament in Serbia have gone awry.

According to media reports, Serbia has suddenly imposed a seven-day quarantine for arrivals from India which has upended the travel plans of many Indians. In fact, on Sunday (July 11), more than 200 Indians, who were largely students, were stranded at Belgrade airport for hours because of this new rule which was sprung on them, said a Times of India report.

Even as photographs of the stranded students started appearing on social media, one of them tweeted for “help”. The tweet said that there were 300-400 Indian students, citizens stuck with children at Belgrade airport.

“Everyone has connecting flights to somewhere but the police are asking for seven-day mandatory quarantine. We can’t, all are exhausted and hungry,” read the tweet on @RealNick05.

The TOI report added that the Indian embassy came to the rescue of its citizens and 120 Indians managed to leave by a Lufthansa flight.

The Indian embassy tweeted that Indians travelling by other airlines will fly out by July 13 and that embassy officials were in touch with the airport authorities and the airlines to ensure Indians reach their respective destinations.

After the second wave of the pandemic hit India, many countries like Canada, US, Saudi Arabia and UAE had banned Indians from directly entering their country.

Hence, many Indians travelling to these destinations would stop over for three days in Belgrade and continue their journey. For those who were travelling to Canada also took an RT-PCR test in Belgrade since reports from Indian labs were not accepted in Canada.

However, this Belgrade option has fallen through for Indians after Serbia notified the seven-day compulsory quarantine on July 9.

According to TOI, chess player Kabir, who had his first match in Serbia on Saturday (July 17) and had accordingly booked tickets to reach Belgrade with his father a day before on Friday (July 16), will have to quarantine and end up missing a few matches.

He told TOI that he had been invited to participate in four chess events in different Serbian cities between July 17 and August 12. And, he was scheduled to leave a day before the event started and now fresh quarantine conditions had been imposed. “Now, I fear missing at least the first event on July 17,” said Kabir to TOI.

‘So sorry,’ says US envoy over desecration of Gandhi sta...

Indian Embassy in US contacts nationals wishing to return home