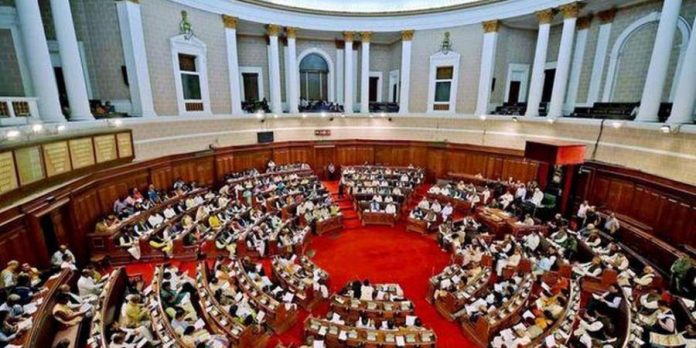 The West Bengal Assembly will discuss the need for an Upper House of the state legislature on July 8. PTI File Photo

Fifty-two years after it was scrapped, the West Bengal government will make a fresh move in the forthcoming assembly session to set up a Legislative Council, a decision that has put the BJP in a fix.

A discussion in the assembly on the report of an ad hoc committee set up 10 years ago to examine the need for an Upper House of the state legislature has been fixed for July 8.

The business of the House will start from July 2 and will continue till July 8.

After the discussions, the state government may move a resolution for the setting up of the Council.

“It will be sent to the Governor after the assembly passes it and then it will go to the Central government for approval of both the houses of Parliament,” said West Bengal Parliamentary Affairs Minister Partha Chatterjee.

After coming to power in 2011, the Mamata Banerjee-led TMC government attempted to re-establish the Council, which had been disbanded by the then Left Front government following an assembly resolution on March 21, 1969.

The 15-member ad hoc committee headed by Partha Chatterjee had submitted its report favouring the formation of the Council in 2011. But the state government had then shelved the proposal, after opposition to it from the Left Front, until “unanimity can be reached on the issue”.

In its election manifesto for this year’s assembly elections, the TMC had promised to set up the Council.

In the absence of any member of the Left Front in the assembly this time, the TMC is hoping to get the support of the main opposition BJP for the proposal as the saffron party-ruled states Uttar Pradesh, Bihar and Karnataka already have the Upper House. Three other states — Maharashtra, Andhra Pradesh and Telangana too have the Councils.

Two bills for establishing Legislative Councils in Assam and Rajasthan are pending in Parliament.

“If the BJP opposes the proposal, it will expose its double-speak as two chief ministers Nitish Kumar of Bihar and Yogi Adityanath of Uttar Pradesh are members of the Legislative Council,” said a senior TMC MLA, who did not want to be named to avoid any controversy over the issue before it’s discussed in the Assembly.

BJP leader and senior MLA Manoj Tigga said the party has not taken a call on the issue. The party would decide its stand only after discussing with the party’s central leadership, he added.

Other BJP MLAs admit in private that it would be difficult for the party to oppose the formation of the Legislative Council in principle. At the same time, the party insiders say, many in the BJP are against allowing the TMC government to push through one of its first major decisions after coming to power in May this year without any opposition.

Also read: Savarkar’s portrait up in UP legislative council; oppn wants it removed

BJP MLA and leader of the Opposition Suvendu Adhikari had taken a copy of the ad hoc committee’s report on Monday to “thoroughly scrutinise it to prepare grounds for opposing it,” said a BJP source.

The BJP legislators had staged a walkout when the Odisha Assembly passed a resolution for setting up a Legislative Council in the state in 2018.

Even after the resolution is passed in the assembly where TMC has a two-thirds majority, it is unlikely to get the nod from the Parliament so easily as two bills for formation of the Councils are already pending there.

A parliamentary committee that studied those bills wanted a national policy on bicameral state legislatures to be framed by the Union government, to prevent their disbandment by any future government.

Mamata Banerjee had said in 2011 when she first mooted the proposal that apart from academics and intellectuals, the Council should also be a forum for people like rickshaw pullers or landless labourers to voice their problems.

Political observers, however, said the Council which can have a maximum of 98 and minimum of 40 members could ultimately turn out to be a forum for rehabilitation of senior leaders or those who failed to get elected to the assembly.

The party did not give the ticket to those above 80 in the assembly elections primarily to make room for younger candidates backed by Abhishek and his team steered by poll strategist Prashant Kishor.

“In the coming days more and more senior leaders of the TMC will be eased out of major party responsibilities. For them the Council — if it is formed within the tenure of the TMC — can be a perfect rehabilitation centre,” observed senior journalist Probir Pramanik.