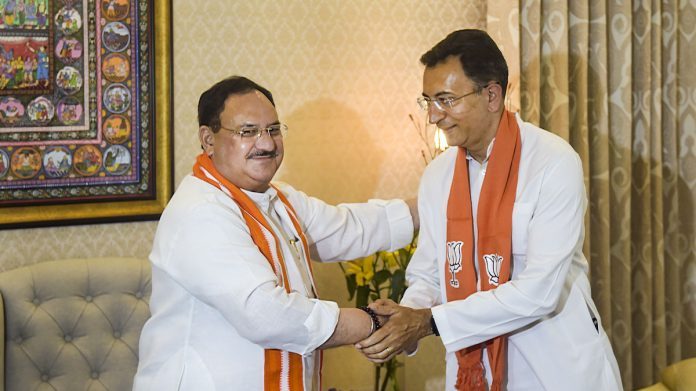 Jitin Prasada was welcomed into the BJP by party chief JP Nadda. Prasada says the only ideology is 'national interest.' PTI Photo

New entrant from the Congress to the BJP, Jitin Prasada, has hit out at his detractors questioning his sudden volte-face, asking them to rather concentrate on what ails the Congress than “abusing” him.

Prasada, believed to be close to Rahul Gandhi, was among the 23 signatories of a letter written to Congress chief Sonia Gandhi last year seeking radical reforms within the party. Kapil Sibal, another signatory to the letter, reacted to Prasada’s shifting of political loyalty, by saying “what is the rational basis for that except for ‘prasada’ (personal gain) politics… We see this happening around the country.”

“What ideology are you talking about? Those who question my ideology, they should first look at the ideology which ensured that the Congress party is in government with the Shiv Sena today. They should introspect and talk about that,” Prasada told The Indian Express.

“They should talk about the ideology when on one hand you are lock, stock and barrel opposed to the Left parties in Kerala and on the other hand… at the same time… in the same election, you’re in alliance with the Left in Bengal. You have to talk about the ideology that ensured that a Muslim cleric with suspect credentials was a part of your coalition. And the same was in Assam,” Prasada said.

To a question of making an “easy choice” over moving to a party in power, Prasada said the only ideology is “national interest.” “If I had to be an opportunist as some people are saying… I would have left seven years back. I wouldn’t have faced two-three defeats in elections,” said Prasada.

Also read: Prasada joins BJP; Jolt to Congress in Uttar Pradesh a year ahead of polls

On his remark last year that India had ceded territory to China, he said as an opposition leader, he had to “question the things that happened.” But over time he increasingly felt that the security of the nation was “safest in the hands of PM Modi.”

Prasada said he had supported abrogation of Art 370 provisions in J&K and that he had welcome the Supreme Court verdict on the Ram temple in Ayodhya. “Whoever is questioning ideological changes and writing and talking and giving ‘gyan’… first they should introspect and answer where they were and what they were doing when the Congress was diverting from its very ideology… the core ideology,” said Prasada.