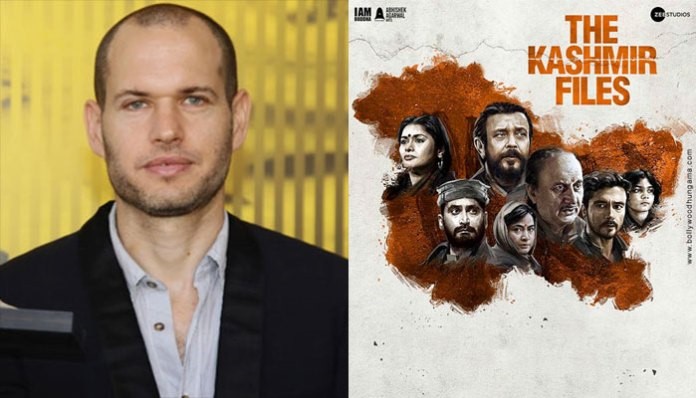 Actor Pallavi Joshi the producer of 'The Kashmir Files' called Israeli filmmaker, Nadav Lapid (on the left) a 'genocide denier'!

Vivek Agnihotri’s film The Kashmir Files continues to court controversy long after its release in March this year.

Israeli filmmaker Nadav Lapid, the head of the jury at the 53rd International film festival of India, had kicked up a storm at the closing ceremony of the event by referring to The Kashmir Files as a ”vulgar” and “propaganda” movie, “inappropriate for an artistic competitive section of such a prestigious film festival.”

“I feel totally comfortable to share openly these feelings here with you on stage. Since the spirit of having a festival is to accept also a critical discussion, which is essential for art and for life,” Lapid had said, making this bold statement in the presence of senior actors from the Indian film industry and Union I&B minister Anurag Thakur.

Incidentally, The Kashmir Files, which centred around the plight of Kashmiri Pandits, who were forced to flee the valley after militants started targetting them, was released in Israel with Hebrew sub-titles in April this year. After the video went viral, netizens were up in arms defending the film. However, there were mixed reactions from the film industry about Lapid’s statement, which has stirred up a massive row with political leaders and ambassadors too jumping in to voice their opinion on the issue.

Actor Prakash Rai, who had slammed the film when it released, took to Twitter to voice his opinion. He tweeted ‘SHAME is Official now…#justasking’.

While actor/director Nandita Das tweeted about the incident, Swara Bhasker too joined the band of supporters of Lapid. She wrote on Twitter, “Apparently it’s pretty clear to the world…”

Meanwhile, Vivek Agnihotri, the director of The Kashmir Files put up a cryptic tweet stating the truth was a dangerous thing. His tweet said, “GM. Truth is the most dangerous thing. It can make people lie”. While his wife and producer Pallavi Joshi, who was also part of the film playing the role of a university professor brainwashing young students against the government on the Kashmir issue, called Lapid a “genocide denier”.

“For decades the international community remained silent on the sufferings of the Kashmiri Pandit community. After 3 decades, the Indian film industry finally realised that it needs to tell India’s story truthfully and objectively,” she said in a statement. Further, she added that it was very unfortunate that a creative platform was used for a political agenda to preserve an old, false and jaded narrative about Kashmir. “We are overwhelmed by the way people of India rose to defend The Kashmir Files against the rude and vulgar statements of a genocide denier,” she wrote on Instagram.

A section of people from the film industry blamed I&B minister Anurag Thakur for appointing Nadiv Lapid as the jury head of the 53rd International film festival of India.

The Federal spoke to multilingual actor Pranitha Subhash who had coaxed her followers on social media to watch The Kashmir Files earlier this year. Pranitha told The Federal, “Films are a representation of the society. Most people of our generation did not even know what had happened to those Kashmiri Pandits 30 years ago. I agree that the film is gory, but that is the reality. The situation on the ground was gory and that has been portrayed on the screen”.

The Kashmir Files was screened at the 53rd International film festival of India on November 22 under the Indian Panorama category. The film is based on the exodus of the Kashmiri Pandits from the Valley in the 1990s. The film made on a modest budget surprisingly became a huge hit at the box-office and was even made tax-free in many BJP-ruled states. However, the film was also criticised for sensationalising the exodus and twisting facts to offer a heavily biased version of the events that unfolded in troubled Kashmir at that time.