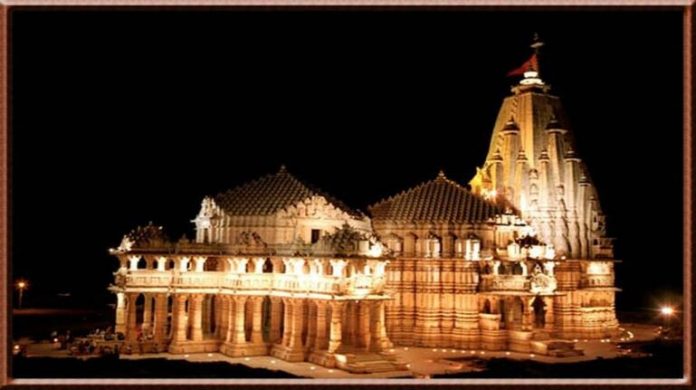 The new projects include a one-km ‘Samudra Darshan’ walkway built at a cost of ₹ 49 crore on the seashore behind the temple.

Prime Minister Narendra Modi has said that while “destructive and terror forces” may dominate for some time, their existence is not permanent.

In a virtual address on August 20, he referred to the example of the historic Somnath temple, which despite being torn down repeatedly through centuries, has managed to stand the test of time.

“Somnath temple has been broken several times over centuries and attempts have been made to destroy the sculptures as well,” PM Modi said. “However, it won the test of time and these attempts; standing back up again and again,” he added.

Also read: Ayodhya is no Somnath, no invite for Prez Kovind

The projects also include a one-km ‘Samudra Darshan’ walkway built at a cost of ₹ 49 crore on the seashore behind the temple, a newly-built museum housing ancient artefacts constructed near the temple at ₹ 75 lakh, and the renovated ‘Ahilyabai Holkar Temple’ or the old Somnath temple located opposite the main temple.

“Forces that strive for the destruction and those who follow the ideology of creating empires out of terror can dominate for some time, but their existence is never permanent as they cannot suppress humanity forever,” he said.

In his virtual address, Modi stressed the importance of religious tourism in the country. “This will also provide employment to youth. They (youth) will also get knowledge about our past. Faith can’t be crushed from terror. We should learn from the past,” he said.

He shared his vision of a “new India” founded on the legacy of the country’s history. He said Ram Temple, currently under construction in Ayodhya, was a strong pillar of this new India.

The Prime Minister was earlier this year appointed the new chairman of the trust which manages the Somnath temple at Prabhas Patan town in Gujarat’s Gir-Somnath district.

Modi, one of the trustees of the Shree Somnath Trust, was named to the top post unanimously, a senior official of the shrine management body said.

The post of the Somnath Trust’s chairman fell vacant after the death of the incumbent, former Gujarat Chief Minister Keshubhai Patel, in October last year.

The temple (also known as the Deo Patan) located in Veraval in Saurashtra on the western coast of Gujarat, is believed to be the first among the 12 Jyotirlinga shrines of Lord Shiva. Built several times in the past after repeated destruction by invaders, the present temple was reconstructed in the Chalukya-style of Hindu temple architecture and completed in May 1951. The reconstruction was started under the orders of the Home Minister of India Vallabhbhai Patel and was completed after his death.