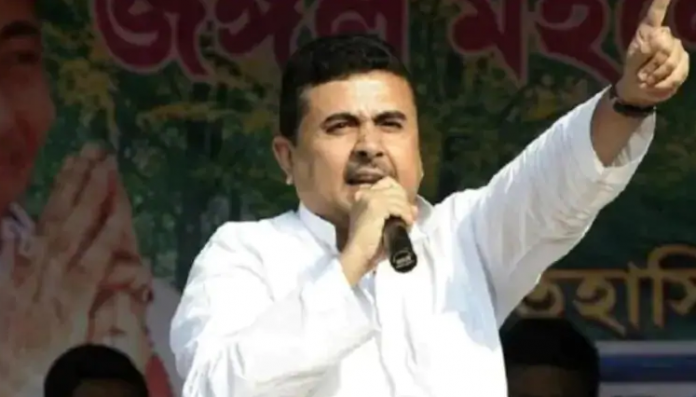 BJP leader Suvendu Adhikari on Friday filed his nomination papers from Nandigram, where he will take on his former mentor and West Bengal Chief Minister, Mamata Banerjee.

“I am a bhoomiputra (son of this land) and I will win,” Adhikari said after submitting his documents.

“Bengal should have the same government as Delhi for the state’s progress.

“I hope to receive blessings from the people. I am confident people will support BJP and bring it to power for real development in West Bengal. There is no question of any competition, said Adhikari, who quit Trinamool Congress and joined the BJP in December last year.

Also read: Ashamed I was in TMC for 21 years: Suvendu Adhikari

Adhikari did not mention Banerjee, who is in hospital following an incident in Nandigram two days ago. The Trinamool chief said a crowd pressed against her, crushing her leg, as she was waving to people from a moving 4×4 after filing her nomination.

Adhikari said he was confident that the BJP would win the assembly election. “The BJP won 18 parliamentary seats in 2019 and it will form a strong government this time with a huge margin,” he said.

He went on to criticise Trinamool, calling it a “private limited company”.

“Everybody else, apart from the aunt and nephew [Mamata Banerjee and Trinamool MP Abhishek Banerjee], are lampposts in the party,” he said.

Adhikari won Nandigram as a Trinamool candidate in 2016 by bagging more than 67 per cent of the votes.

Meanwhile, a theatre group in the state has dropped an artiste from a play after he joined the BJP.

Saurav Palodhi, whose Ghum Nei, an adaptation of the Utpal Dutt classic on the present political situation of the country through the prism of Left ideology, posted on his Facebook account that the artiste, Kaushik Kar, was removed from the production for joining the BJP.

Kar, had been invited by Palodhi’s group Ichcheymoto in 2019, to play a character whose name referenced a man who was lynched in 2015 on suspicion of eating beef.

Palodhi posted on Facebook in Bengali: “We are removing Kaushik Kar from Ghum Nei with immediate effect because he has joined the BJP. And that is enough reason to remove him in the present times. There can be no place for communal elements in a play for the working class.”

The post triggered a storm on social media with users like Arka Roy saying, “Is it the example of artistic freedom? Democratic right? Can an artist be judged by his leftist or rightist leanings? It should be left to the person concerned which political party he or she should join. None has the right to interfere.”

Palodhi said he stood by the decision, “as the play is fundamentally against BJP’s ideology and someone associated with that party cannot be part of Ghum Nei”.