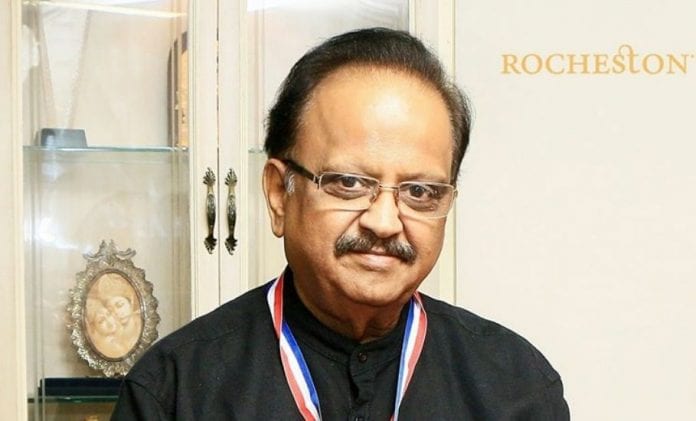 Popular singer S P Balasubrahmanyam’s condition is stable, and he continues to be on ventilator and extracorporeal membrane oxygenation (ECMO) support, according to a statement released on Friday (August 21) by MGM Healthcare, the hospital treating him.

The 74 year-old actor-singer “continues to be on ventilator and ECMO support in the Intensive Care Unit (ICU). His condition currently is stable,” Dr Anuradha Baskaran, Assistant Director-Medical Services, MGM Healthcare said in a bulletin. 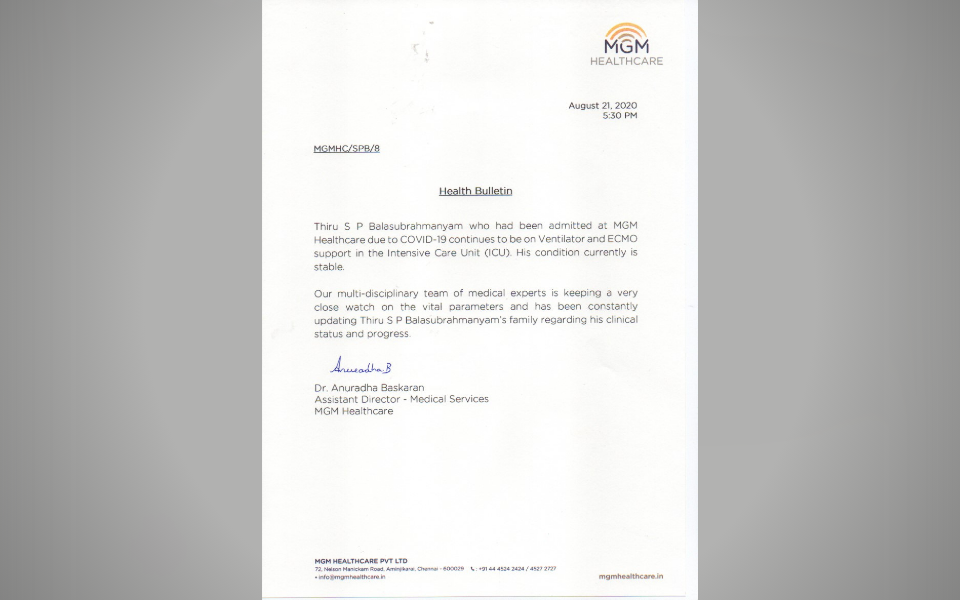 “Our multidisciplinary team of medical experts is keeping a very close watch on the vital parameters and has been constantly updating Thiru S P Balasubrahmanyam’s family regarding his health and progress,” the statement added.

The veteran singer is currently battling COVID-19 and was admitted to the hospital on August 5 after he tested positive for the infection.

On Thursday (August 20), celebrities as well as the general public across Tamil Nadu came together and prayed for his recovery.

Veteran director Bharathirajaa, a long time friend of SPB, had on Wednesday (August 19) called for a one-minute silent mass prayer at 6 pm. Actor Rajinikanth and a host of others later appealed to fans and the general public to participate in it.

Complying with the request, in an emotional show of solidarity, celebrities from the Tamil film industry including music composers Ilayaraja, A R Rahman, lyricist Vairamuthu and actor Rajinikanth joined the mass prayer, while many sung his popular hits.

Other young men and children too lined up on the outer periphery of MGM Healthcare and offered prayers holding candles. Similarly, fans of the singer turned up in front of the ancient Big Temple in Thanjavur and in towns and cities including Madurai, Salem, Erode and Coimbatore, while scores prayed from their homes and recited prayer songs from their religions.

Related news: The story of an enduring friendship for 5 decades — SPB and Ilayaraja

Social media platforms too witnessed thousands of netizens praying for his speedy recovery with hashtags such as “#GetWellSoonSPBSIR” and “#SPBalasubrahmanyam” trending.
Furthermore, special prayers were held on Friday at the famous Sabarimala Lord Ayyappa temple in Kerala for SPB’s well-being.

The Travancore Devaswom Board (TDB) said a special ‘usha pooja’ was also held at the temple on behalf of Balasubrahmanyam. “A musical offering was held at the temple using nadaswaram (wind instrument), thakil (percussion instrument) and Idaykka (a drum) played by TDB employees Ganesh Thiruvarppu, Sugunan and Yadukrishnan respectively.