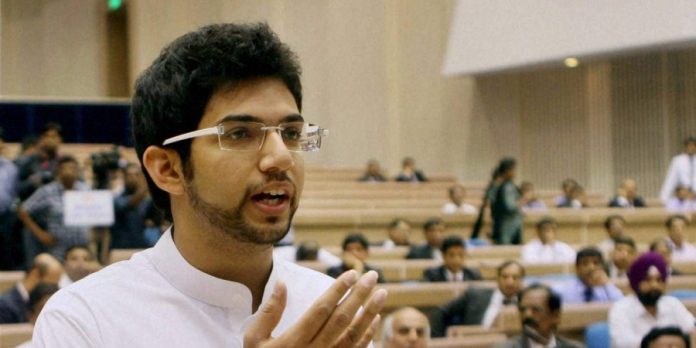 Hindutva is one of the ideologies of Shiv Sena, but it is different from “BJP’s Hindutva”, argues Yuva Sena chief Aaditya Thackeray in a new book.

The book, ‘The Young and the Restless’, authored by student-activist Gurmehar Kaur, is a series of interviews of the country’s young politicians which include the likes of Omar Abdullah, Sachin Pilot, Aaditya Thackeray and Shehla Rashid.

“… Usually, a party like Shiv Sena is taken to be right wing, so you have Hindutva, which of course is one of our ideologies. But it’s not BJPs Hindutva; it’s very different from that. It is centrist but its right wing centrist because we are pragmatic and we are talking of things like say nightlife, electric buses and plastic pollution. You know, we are talking of something completely different,” said Thackeray.

Yuva Sena chief Thackeray has been at the forefront of plastic ban narrative in Maharashtra and has also been pushing for 24×7 nightlife in Mumbai.

Thackeray, whose party is in alliance with the BJP for the 2019 Lok Sabha elections, listed various points where he believed his party differed from the BJP — like on “lynching” and calling people “anti-national”.

“… For example say, we actually spoke out against the lynching. Our Hindutva is loving the nation which is not again, if you speak against the government you’re anti-national.”

On the question of religion in politics, and if he thinks “Hinduism faces any threat as a religion?” as claimed by the “BJP before every election”; his reply was rather straight, “I don’t think the government should be concerned about religion”.

“The government’s job is to govern. As a party they can always speak about religion, we do, they do, every party does. I mean, every party has a particular ideology. I wouldn’t term it as vote bank politics because ideologies are important.”

“But we (Hindus) have been there for centuries as a race and a religion, so what makes you think that once the BJP government goes away, it will change?,” he added.

In the free-wheeling conversation, which had Thackeray speaking on a host of issues like feminism, women reservation and environment; he also talked about his role-models

“Sachin Tendulkar and Jonty Rhodes” in sports and his “grandfather Bal Thackeray, father Uddhav Thackeray and the former prime minister of the United Kingdom, Tony Blair” in politics.

“This might sound strange, but one of the modern political thinkers I am inspired by would be Tony Blair. His new Labour Party changed the direction of his party. It was Labour talking in modern times, Labour coming to power with modern ideas, reforming a lot of the party. So, in that sense, till today what he speaks is very sensible,” he added.

Published by the Penguin, the book “The Young and the Restless”, priced at Rs 299, claims to explore whether the politics of young leaders only mimics that of the older party leaders or if they have the ideas, passion and motivation of the demographics they represent.