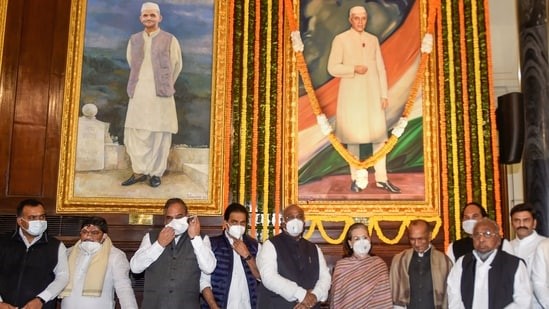 If the ruling dispensation had its way, it would rather not acknowledge the memory of the country’s first Prime Minister Jawaharlal Nehru, it seems.

Showing scant respect for the memory of Jawaharlal Nehru, no senior minister turned up at a key traditional function to mark the birth anniversary of Jawaharlal Nehru on Sunday (November 14), which is customarily held with floral tributes being paid to his portrait at the Central Hall of the Parliament. Lok Sabha Speaker Om Birla and Rajya Sabha chairman Venkaiah Naidu too skipped the function, leaving the Congress party fuming, said a NDTV report.

Calling out the absence of senior ministers at the function as “extraordinary”, Congress leader Jairam Ramesh tweeted: “Can it get more atrocious than this?” the Rajya Sabha MP said.

Extraordinary scene today in Parliament at the traditional function to mark the birth anniversary of those whose portraits adorn the Central Hall. Speaker Lok Sabha absent. Chairman Rajya Sabha absent. Not a single Minister present. Can it get more atrocious than this?!

Besides the Minister of State in the Ministry of Micro, Small & Medium Enterprises, Bhanu Pratap Singh Verma, the Leader of Opposition in Rajya Sabha Mallikarjun Kharge, Congress chief Sonia Gandhi and other members of Parliament were present at the ceremony. Other Opposition leaders too condemned the move.

Replying to Ramesh’s tweet, senior Trinamool Congress leader Derek O’ Brien tweeted that nothing surprises him anymore. According to O’Brien, this dispensation (the BJP-led government) is destroying India’s great institutions, including Parliament one day at a time.

Nothing surprises me anymore. This dispensation is destroying India’s great institutions, including #Parliament one day at a time. https://t.co/KrjILIbmsA

Earlier too, during the huge celebrations planned for the 75th anniversary of Independence Day, the Congress had criticised the government for not including Nehru’s photograph in the posters made for the huge Azadi ka Amrit Mahotsav.

At that time, Jairam Ramesh had also tweeted that this atrocious move was “not surprising this regime and its toadies masquerading as scholars but atrocious nevertheless.”

Party spokesperson Gaurav Gogoi too had jumped in to comment that the country removes the first prime minister from a website about the freedom struggle and said the move was “petty” and an “injustice”. Meanwhile, Congress leader Shashi Tharoor attacked the Indian Council of Historical Research or ICHR, and said it had “disgraced” itself. But the ICHR, an autonomous body under the Ministry of Education, defended itself stating that this controversy was “unnecessary”.

The poster in question was just one of the many released as part of the celebrations, the ICHR had said adding that there will be several others and Nehru will be featured in them.

Meanwhile, a Hindustan Times report said that Lok Sabha Speaker Om Birla on Sunday has attended the Vidhan Sabha Children’s Session organised by the Commonwealth Parliamentary Association (Rajasthan Branch). This is one of the activities organised in the country on the occasion of Pandit Nehru’s birthday, which is also celebrated as ‘Children’s Day’.