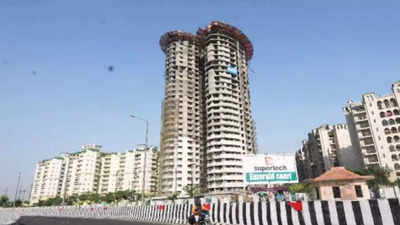 The Supreme Court on Monday directed the demolition of twin 40-storey towers of Supertech’s Emerald Court project in Noida, Uttar Pradesh, for violation of building by-laws.

The court directed that the entire amount of home buyers be refunded with 12 per cent interest from the time of the booking and the residents welfare association be paid ₹2 crore for the harassment caused due to the construction of the twin towers.

A bench of Justices D Y Chandrachud and M R Shah said upheld the April 11, 2014, verdict of the Allahabad High Court, which directed the demolition, does not deserve any interference.

It said the construction of the towers, which have 915 flats and shops, was done in collusion with Noida (New Okhla Industrial Development Area) authorities and the high court was correct in holding that view.

The bench said that demolition exercise be carried out within three months under the supervision of Noida and an expert agency and the cost of the entire exercise be borne by Supertech Ltd.

The top court said that recently it has seen rampant unauthorised construction in metropolitan areas in collusion with planning authorities and the issue has to be dealt with sternly.

The company has said it will file a review petition against the judgement.

The court slammed a “rampant increase in unauthorised construction” and stressed that protection of the environment and safety of residents had to be considered at all times.

“This construction dilutes safety standards [and] illegalities have to be dealt with strictly. [The] sanction given by Noida authorities is violative of building regulations… goes against minimum distance requirements between towers… fire safety norms have been violated… garden area was violated to construct the towers,” the court said.

Supertech denied any illegality in the construction of the towers. Among other arguments, Vikas Singh, the lawyer representing the company, said the residents welfare association that filed the case did not exist when construction started.

“We have followed the minimum distance criteria, followed the fire safety norms and all other parameters. There was no illegality as canvassed by the home buyers,” he said.

In its previous hearing on the matter earlier this month, the court came down hard on Noida authorities for failing to provide copies of the sanctioned plan, as requested by home buyers.

“You are reeking with corruption right from your eyes and nose,” the court said.  “This is a shocking exercise of power.”