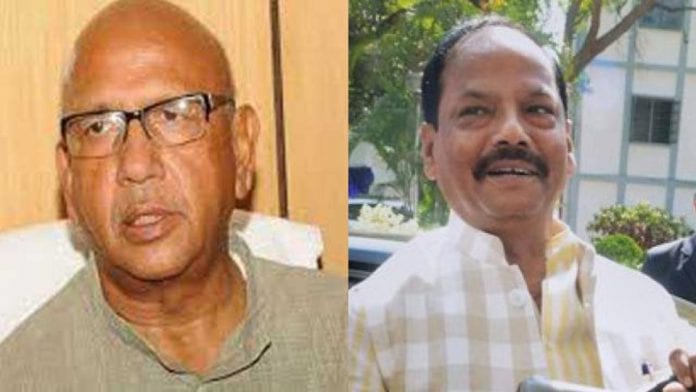 Former Jharkhand minister Saryu Rai, who had been trailing behind Chief Minister Raghubar Das in the first three rounds, raced ahead in the fourth round to take a lead of 4,000 votes in the prestigious Jamshedpur-East seat on Monday (December 23).

There are still 12 more rounds of counting of votes to go.

Raghubar Das is the 5-time MLA from the hot seat – he has never lost an election from this seat since 1995 – which has stayed in the headlines after his former cabinet colleague Roy filed his nomination as an Independent candidate.

Rai (68) has been a two-time MLA from Jamshedpur West constituency and has served as the minister for food and civil supplies in Das’s cabinet.

After the BJP denied ticket to Rai, he decided to contest as an Independent candidate against the Chief Minister, a seat which Das has held since 1995. Rai enjoys the support of people like Bihar Chief Minister Nitish Kumar, Jharkhand Mukti Morcha’s Hemant Soren, Rajya Sabha Member of Parliament Subramanian Swamy among others.

He claimed that BJP denied ticket owing to his closeness to Nitish Kumar and for his fight against corruption in the ruling BJP government led by Das. He had raised concerns over the ownership rights to people living in unauthorised colonies.

Rai, a native of Buxar in Bihar, is widely known for his crusade against corruption. His expose on multi-crore mining scam led to the jailing of former Jharkhand Chief Minister Madhu Koda. And his expose on the fodder scam led to the arrest of former Bihar Chief Minister Lalu Prasad Yadav. So, he relatively enjoys a clean image in the state. Jharkhand CM Raghubar Das campaining in East Jamshedpur for the upcoming polls.

The constituency comprises of two parts — the planned industrial area established by Tata Group’s founder Jamsetji Tata and 86 urban slums inside and outside the Tata area. While the industrial area and the township is largely developed, the urban slums lack development and they play a crucial role during polls.

“We elected Raghubar Das successive times hoping that he would keep up the promise of giving us the land rights. But till today we haven’t got any. So why shouldn’t we vote for a change this time. Rai seems to be a person who fights corruption and he has promised he will give us land rights, much on the lines of Delhi government,” says Balram Namta, a senior citizen living in one of the urban slums in the constituency.