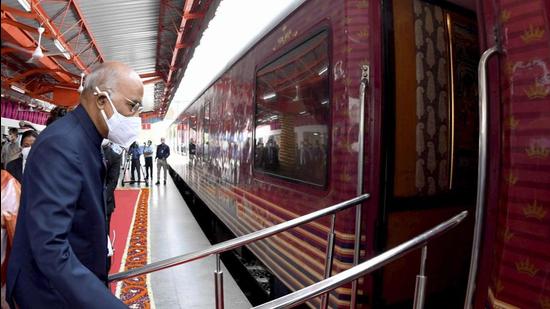 In line with the tradition of his predecessors, President Ram Nath Govind decided to travel by train to Kanpur. PTI file photo

He achieved what can be known as the ‘big Indian dream’. A village boy who traverses a long and arduous journey to assume the responsibilities of the highest office in India.

He was born in a mud hut in Paraunk village, 75 km from Kanpur, which eventually caught fire and collapsed. And, he had lost his mother when his humble thatched dwelling caught fire. The youngest of five brothers and two sisters born to a shopowner-cum-farmer and homemaker mother, the little boy used to walk 8 km everyday to reach his elementary school since no one in his village owned a cycle.

Decades later, on a visit to his birthplace on Sunday (June 27), President Ram Nath Kovind recalling his humble beginnings, bowed and touched the soil of Paraunk, the village where he was born, after he landed at a helipad near his village. He also acknowledged with deep gratitude the contribution of his village to him becoming the first citizen of the country.

“I had never imagined even in my dreams that an ordinary boy like me from the village would get the privilege of discharging the responsibilities of the highest office of the country. But our democratic system has shown this by doing it,” President Kovind said.

This is his first visit to his village after becoming the President of India in 2017.

In a rare emotional gesture, after landing at the helipad near his village, Paraunkh of Kanpur Dehat district of Uttar Pradesh, President Ram Nath Kovind bowed and touched the soil to pay obeisance to the land of his birth. pic.twitter.com/zx6OhUchSu

The President’s office which had tweeted the pictures showed an obviously emotionally- moved President, clad in a cream coloured bandhgala and black shoes, bending down to touch the hard ground and placing the fingers back on his forehead as a sign of reverence for his land of birth.

Chief Minister Yogi Adityanath and Governor Anandiben Patel who were waiting to greet him upon arrival, looked on with respect.

Later, while addressing a Jan Abhinandan Samaroh at his village, the President further waxed eloquent about his love for his village. He said that wherever he was, the smell of the soil of his village and the memories of the village residents were always present in his heart. “Wherever you are, I am too,” he said.

“For me, Paraunkh is not just a village, it is my motherland, from where I have always been inspired to go ahead and serve the country,” he said, adding that he was happy to be back at his native village.

The President pointed out that earlier it would have been difficult to get out of the village and make it big in life but that was not the case now. He hailed the democratic system of the country which, he said, has opened a way forward for everyone, irrespective of their status at birth, to achieve important milestones. (The President had completed his law degree and went on to become an advocate in 1971, practising in the Delhi High Court and the Supreme Court; served as personal assistant of former PM Morarji Desai; and then joined the BJP in 1991)

The President, who is currently on a four day trip to UP, had boarded a train along with his wife, First Lady Savita Devi Kovind, to Kanpur. A statement from Rashtrapati Bhavan said the President had decided to travel by train to Kanpur “in line with the tradition of his predecessors”.

APJ Abdul Kalam Azad was the last President to use a presidential saloon in 2006.

In Kanpur, he looked up his old friend, a cloth merchant, Agarwal, who was ailing. He also took a cake to celebrate 51st wedding anniversary of Agarwal and his wife Veena. The President stayed at Agarwal’s house for more than one hour.

Later, talking to the media, Agarwal said he was thrilled that the President had paid him a visit and it reminded him of Lord Krishna visiting the house of his poor friend Sudama.