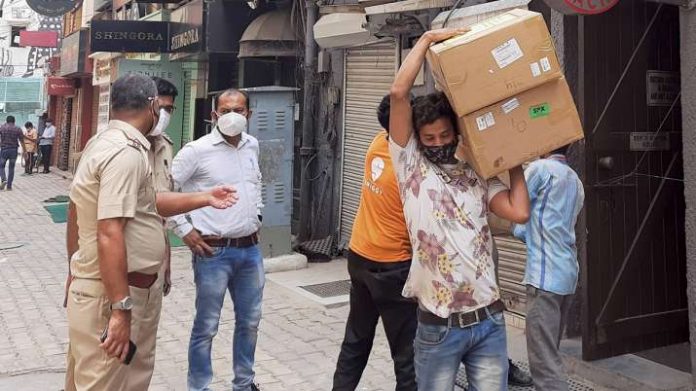 Police personnel during a raid at a restaurant in Khan Market, in which oxygen concentrators were recovered on Friday. PTI Photo

The police on Friday (May 7) raided a popular eatery in south Delhi’s Khan Market and recovered almost 100 oxygen concentrators a day after another restaurant in Lodhi Colony was raided.

The eatery has been identified as Town Hall restaurant and bar at Lodhi Colony. Both outlets are allegedly linked to Navneet Kalra, an influential businessman, who is said to be on the run.

With this, the total number of oxygen concentrators seized over the past two days of raids has gone up to 524. On Thursday, Delhi Police raided the premises of Nege & Ju at Lodhi Colony’s Central Market and Khullar farm at Mandi village, all owned by Kalra.

COVID-battered Delhi has been experiencing a severe shortage of oxygen supply with even the Supreme Court asking the Centre to supply at least 700 metric tonne of oxygen every day for the National Capital.

An FIR under sections of the Essential Commodities Act and Epidemic Diseases Act was registered against the four men. The arrested have been identified as Gaurav Singh, Satish Sethi, Vikrant and Hitesh, all residents of Delhi. “Hitesh is the manager of the place, while the mastermind is Kalra himself,” said Thakur.

According to police, the accused imported the oxygen concentrators and sold them in Delhi. The concentrators were bought for Rs 20,000-25,000 and were being sold for at least Rs 70,000. The police said the group has sold concentrators to over 50 buyers so far.