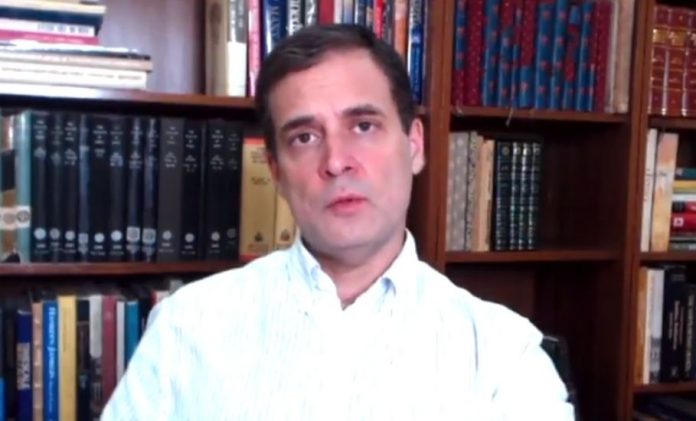 Two numbers belonging to Gandhi were selected as candidates for possible surveillance a year before the 2019 general election and in the months afterwords | File Photo: Screenshot

They were among dozens of Indian politicians, journalists, activists and government critics whose numbers were identified as possible targets for the Israeli company NSO Group’s government clients, a global collaborative investigative project has revealed after examining a leaked database of phone numbers listed by multiple government clients of the surveillance firm.

The leaked global database of 50,000 phone numbers was first accessed by French firm Forbidden Stories and Amnesty International before being shared with The Wire, The Guardian, Die Zeit, Washington Post, Suddeutsche Zeitung, Le Monde and 10 other Mexican, Arab and European news organisations.

NSO Group has said that it provides the software only to “vetted governments”, which is believed to be over 36 and includes intelligence, military and law enforcement agencies. The firm, however, refused to identify its clients.

The first tranche of names – revealed by The Wire on Sunday night, when it broke the story – contained names of prominent Delhi-based journalists covering sensitive subjects such as national security, defence and diplomacy.

On Monday The Wire revealed that Gandhi, the leader of the Congress, Kishor, the poll strategist widely credited with helping Trinamool Congress leader Mamata Banerjee sweep the assembly election in West Bengal, and Lavasa, the only member of the three-man Election Commission to rule that Prime Minister Narendra Modi had violated the Model Code of Conduct while campaigning for the 2019 general election, were also among the potential targets.

Two numbers belonging to Gandhi were selected as candidates for possible surveillance a year before the 2019 general election and in the months afterwords.

The numbers of five of his social friends and acquaintances – none of whom play any role in politics and public affairs – were also placed on the list of potential targets, The Wire reported.

The Congress leader told the website that he had received suspicious WhatsApp messages in the past and frequently changed numbers and instruments so as to make it “a little harder for them” to target him.

Prashant Kishor’s phone was broken into in the midst of the West Bengal assembly election, according to digital forensics conducted by Amnesty International’s Security Lab and shared with The Wire.

In addition, the mobile phone of Abhishek Banerjee, the Trinamool MLA who is nephew of Mamata Banerjee, was also selected as a potential target. Also on the list was Banerjee’s personal secretary.

Lavasa, the only member of the Election Commission to rule that Modi had violated the Model Code of Conduct in 2019, was selected as a potential candidate for surveillance just weeks after his dissent, The Wire said.

Election commissioners are constitutional functionaries, whose independence from government is guaranteed by statute and is considered crucial for the free and fair conduct of elections in India.

A few months after this [his dissent], in September 2019, he [Lavasa] and his family were placed under the scanner of various investigative agencies. His wife was served a notice by the Income Tax department for alleged discrepancies in income tax filings. Later in November 2019, the Enforcement Directorate began an investigation against a company that had Lavasa’s son as director, for alleged violation of foreign exchange laws.

In December, Lavasa’s sister was also served a notice by the Income Tax department over alleged stamp duty evasion.

A few months later, even though he was due to take over as Chief Election Commissioner as per norms of seniority that have been followed for years, Lavasa opted to quit the Election Commission and join the Asian Development Bank as vice-president. He currently works there.

In further revelations, The Wire said three phone numbers belonging to the Supreme Court staffer who accused then chief justice Ranjan Gogoi of sexual harassment in April 2019 were selected as potential targets for surveillance by an official but unidentified Indian agency.

The staffer was dismissed from service in December 2018, weeks after she says she rebuffed the judge’s advances. She recorded her allegations in a sworn affidavit on April 20, 2019 and was marked as a person of interest just days after this.

Eight other phone numbers belonging to her husband and two of his brothers were also marked as possible candidates for surveillance in the same week when her allegations against the CJI were first reported.

After the sexual assault allegations, Gogoi went on to serve out his term as the 46th CJI until November 17, 2020. Within six months of his retirement, he was nominated to the Rajya Sabha as “a member of eminence” by the Union government.