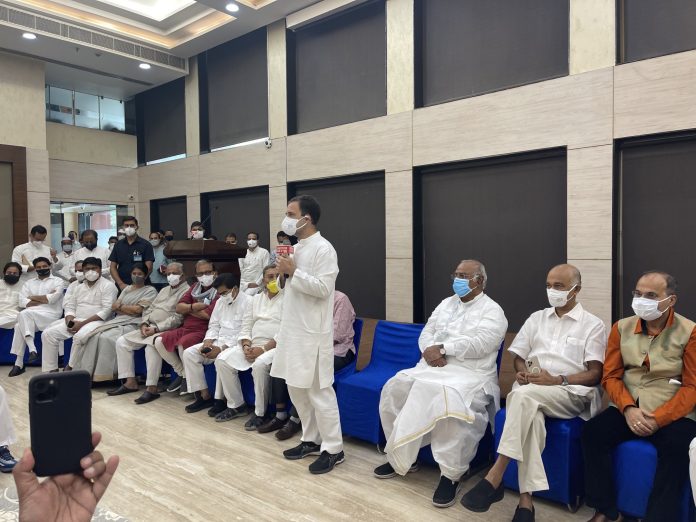 Opposition parties are discussing whether a 'mock session' can be held outside Parliament. Photo: Twitter

Amid a stalemate in Parliament over Pegasus snooping scandal and other issues, Rahul Gandhi on Tuesday (Aug 3) led a breakfast meeting of 11 opposition leaders — the second this week. The meeting was called to discuss if the Opposition could hold a ‘mock session’ outside Parliament.

There were indications last week that the government would curtail the monsoon session scheduled to end on August 13. The session that began on July 19 has functioned only for 18 hours out of the possible 107 hours so far.

Nearly a week after his tractor ride to Parliament to back the protests against new farm laws, Rahul rode a cycle to draw attention to the issue of fuel price hike, urging other leaders to join him. “One of the ways to draw the attention (of the government) to the issue is by cycling to Parliament. People of India are struggling…” Rahul told the opposition leaders on Tuesday morning at the breakfast meeting. Several other opposition leaders were also seen riding cycles.

“After a sumptuous breakfast, leaders of eleven Opposition parties spoke briefly about the importance of unity in Parliament and on the ground in the struggle against the anti-people policies & undemocratic actions of the BJP government. We are witnessing something special here,” Congress MP Shashi Tharoor tweeted.

AAP MP Sanjay Singh, who could not attend the breakfast meeting, said, “Attending or not attending (the meet) is not important. Whenever a discussion is held in parliament, we will support the farmers and raise the issue of snooping row.”

“The Opposition is not letting Parliament function,” PM Modi told at the BJP parliamentary party meeting, which was held around the same time, media reports said.

Union Minister Rajnath Singh had called up Kharge, the leader of the Opposition in the Rajya Sabha, on Monday afternoon to seek his support amid protests, sources said. The government should allow discussions in Parliament, Kharge had told him.

While the monsoon session of parliament began on July 19, parliament has only 18 hours out of 107 hours in the first two weeks. More than ₹ 133 crore in taxpayer money has been lost because of disruptions, government sources said on Saturday (July 31).

The opposition has been demanding a Supreme Court-monitored probe into the Pegasus snooping row and the allegations that Congress leader Rahul Gandhi, poll strategist Prashant Kishore, judges, activists and even ministers were potential targets of an Israeli spyware.

The government has dismissed these demands, saying a statement read out in Parliament by IT Minister Ashwini Vaishnav was sufficient. The BJP has labeled the snooping of the phones as a “non-issue”.

Last week, Rahul Gandhi addressed a meeting of 14 opposition parties. “The entire opposition is here… our voice is being curtailed in Parliament. We are only asking if the Pegasus software was bought and if it was used against certain persons in India,” Gandhi later asked, addressing the media.

“I want to ask the people: there is a weapon Narendra Modi has planted in your phones… used against opposition leaders, journalists, activists… should there not be a discussion in Parliament?” he questioned.