Delhi police have arrested Mohammed Rehan, the owner of the building where a fire broke out on Sunday (December 8) morning and claimed the lives of 43 people.

A case has been registered against him under Section 304 (culpable homicide not amounting to murder) of the Indian Penal Code (IPC) and Section 285 (negligent conduct with respect to fire or combustible mat­ter).

His manager Furkan too has been arrested, according to a report by ANI.

In the worst fire accident since the 1997 Uphaar Cinema tragedy in New Delhi, a massive fire ripped through a factory in Anaj Mandi area of north Delhi on Sunday, leaving 43 dead and many others injured.

Almost all the deceased were migrant labourers hailing from Bihar and Uttar Pradesh.

The fire broke out in the second floor of the four-storey building in early hours and 30 fire tenders were pressed into service when the incident was reported at 5.22 am. Around 150 fire personnel carried out rescue operations for nearly five hours to douse the blaze. They pulled out 63 people from the building. Two fire personnel sustained injuries while carrying out rescue operations, fire officials said.

Firemen made their way through narrow lanes to rescue those trapped inside the building and carried many unconscious labourers on their backs. Fire officials said the congested area made it difficult for them to carry out rescue operations.

Many of those killed and injured were asleep when the fire broke out. As the building lacked proper ventilation, most of the people died due to asphyxia.

After the Delhi Fire Service controlled the fire, the National Disaster Response Force searched the building for hazardous gases with gas detectors, said Aditya Pratap Singh, deputy commander, NDRF. “We found carbon monoxide (CO), after which we searched the area manually. The entire third and fourth floor of the building was engulfed with smoke. The content of CO was more,” he said.

Power discom BSES Yamuna Power Limited said the fire broke out due to a short circuit triiggered by an “internal system” flaw in the building. A spokesperson of BYPL said that a team from the BYPL immediately disconnected the electricity supply.

The electricity metres of the building were on the ground floor and were found to be intact, he added.

According to Delhi Fire Service Director Atul Garg, the building did not have a fire clearance and no fire safety equipment was found installed on the premises.

The Delhi government has ordered a magisterial inquiry into the incident and sought a detailed report within seven days. 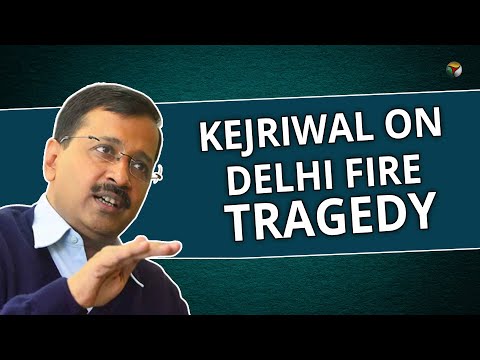 A team from the Forensic Science Laboratory (FSL) analysed the four-storey building and the possible places from where the fire could have started, but could not collect any samples due to the rescue work that was being done by the fire department.

At the three hospitals where the dead and injured were taken — RML, LNJP and Hindu Rao Hospitals — distraught relatives were trying to locate their family members. Thirty-four people had been brought dead to LNJP hospital.

Some of the bodies were charred, said Dr Kishore Singh, Medical Superintendent, LNJP. Out of the 15 injured brought to LNJP, nine people are under observation and others have partial injuries, he said.

What are the survivors saying?

Firoz Khan (32), who is among the survivors of the deadly blaze which killed 43 persons, said he had been sleeping near the door and managed to escape along with few others after alerting the inmates about the fire.

He said that many of those sleeping at a distance from the door were trapped in the fire and that he did not know whether they survived the incident. The inmates had to struggle to escape as the exit routes were partially blocked and several windows were found sealed, according to rescuers.

At LHMC Hospital, fellow villagers and acquaintances were frantically looking for 14-year-old Mohammed Sahmat and 13-year-old Mohamed Mahbub, who were in the factory during the fire.

Mohammed Arman, who was Mahbub’s uncle, was seen showing hospital authorities the picture of Mahbub and Sahmat, only to later realise Mahbub was among those brought dead at the hospital.

However, it was not confirmed whether the two minors worked in the units.

Manoj (23), a resident of Begusarai in Bihar, said his brother Naveen (18) was working in a handbag manufacturing unit operating from the premises. “I got a call from his friend informing that he has been injured in the incident. I have no clue which hospital he has been taken to,” he said.

A host of leaders expressed shock over the loss of lives in the fire tragedy.

Prime Minister Narendra Modi announced a compensation of ₹2 lakh. Delhi Chief Minister Arvind Kejriwal promised an ex-gratia payment of ₹10 lakh each for the next of kin of those killed and ₹1 lakh for those injured and “strictest” punishment for those responsible for the incident.

PM @narendramodi announced an ex-gratia of Rs. 2 lakh each from PMNRF for the next of kin of those who have lost their lives due to the tragic fire in Delhi.

PM has also approved Rs. 50,000 each for those seriously injured in the fire.

PM Modi described the incident as “extremely horrific”. “The fire in Delhi’s Anaj Mandi on Rani Jhansi Road is extremely horrific. My thoughts are with those who lost their loved ones. Wishing the injured a quick recovery,” the prime minister said in a tweet.

The fire in Delhi’s Anaj Mandi on Rani Jhansi Road is extremely horrific. My thoughts are with those who lost their loved ones. Wishing the injured a quick recovery. Authorities are providing all possible assistance at the site of the tragedy.

Tragic loss of precious lives in the fire accident in New Delhi. My deepest condolences with families of those who have lost their loved ones. I pray for the early recovery of the injured.

Have instructed concerned authorities to provide all possible assistance on urgent basis.

Chief Minister Arvind Kejriwal and his cabinet colleagues Imran Hussain and Satyendra Jain visited the accident spot to take stock of the situation. He termed the fire incident “tragic” in a tweet and said that firemen were doing their best.

Bihar Chief Minister Nitish Kumar expressed grief over the death of 43 people and announced an ex-gratia of ₹2 lakh each to the next of kin of the victims who hailed from the state.

Congress leaders Sonia Gandhi and Rahul Gandhi too condoled the loss of lives in the fire accident.

“Expressing her deepest condolences to the families and loved ones of over four dozen deceased in the tragic incident, Gandhi hoped that maximum lives will be saved and those injured are expeditiously,” a party statement said.

She also urged the authorities of central and state government to provide every assistance to the victims and their families.

“I do not wish to indulge in politics but there must be an investigation into the incident. Someone has to take responsibility, it is a tragic incident,” said BJP MP Gautham Gambhir.

“All I can say is that my heart goes for the families, who have lost their loved ones in the tragic incident. It is very unfortunate. One should take permission and no-objection certificate to run such factories,” he added.

Congress and BJP leaders blamed the Arvind Kejriwal government for the fire accident at Anaj Mandi.

Delhi BJP president Manoj Tiwari, who visited the spot along with Union Housing and Urban Affairs minister Hardeep Puri, said electricity wires were dangling in the area but no action was taken by government agencies despite repeated complaints.

Tiwari announced an ex gratia of ₹5 lakh to the families of each victim and ₹25,000 for treatment to the injured, on behalf of the BJP. The party also cancelled all its programmes for the day in view of the tragedy.

The Congress too blamed the AAP government and the BJP-led municipal corporations for the incident. “Kejriwal government is responsible for this. The MCDs come under the BJP. They are also equally responsible for it,” Delhi Pradesh Congress Commitee President Shubhash Chopra said.

The AAP accused the BJP of playing politics over the massive fire at Anaj Mandi, saying the BJP-run MCD has to be held accountable for the deadly incident.

“This settlement should not be here, they have been given alternative places but the Delhi government has not shifted them,” Union Minister Puri alleged.

AAP senior leader Sanjay Singh said it was the responsibility of Municipal Corporation of Delhi to shut the factory if it was found to be running illegally.

During an interview, Congress leader Sharmistha Mukherjee blamed MCD and Delhi government’s negligence for the incident.

One of the first firemen to enter the blazing building in Anaj Mandi area, Delhi Fire Service personnel Rajesh Shukla saved 11 people from the inferno. Shukla injured his legs in the rescue operation and is recuperating in LNJP Hospital. Delhi Home Minister Satyendra Jain met Shukla at the hospital.

“Fireman Rajesh Shukla is a real hero. He was the first fireman to entered the fire spot and he saved around 11 lives. He did his job till the end despite of his bone injuries. Salute to this brave hero (sic),” Jain tweeted.

Fireman Rajesh Shukla is a real hero. He was the first fireman to entered the fire spot and he saved around 11 lives. He did his job till the end despite of his bone injuries. Salute to this brave hero. pic.twitter.com/5aebB2XLUd