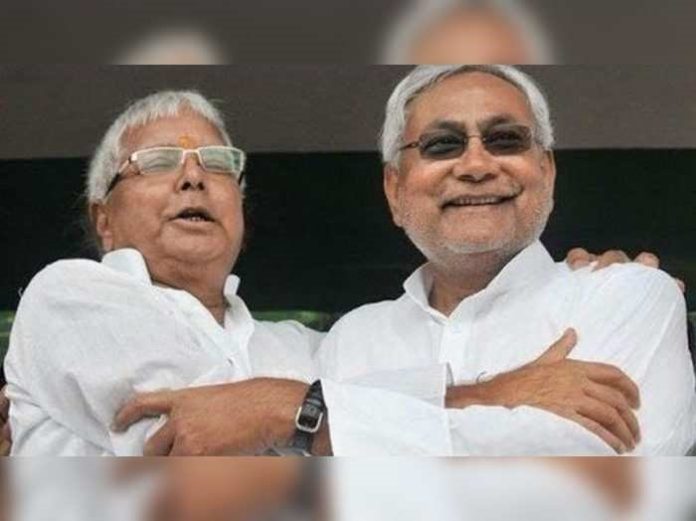 “All opposition parties on the same page in the fight against the BJP and discussion on a concrete plan of action will happen later after the election for the post of Congress president,” Nitish said. File photo

The meeting at Sonia’s 10 Janpath residence is being considered very crucial in forging an opposition unity as efforts are on to reconcile differences between the Congress and some regional parties that have been at loggerheads traditionally.

This was Nitish’s first meeting with Sonia since he severed ties with the BJP and joined hands with the RJD and the Congress to form the government in Bihar in August.

Another meeting after Cong prez poll

This was also Lalu’s first active political engagement in a long time. He has been ailing for some time now.

After the meeting, Lalu told reporters, “We have to bring all opposition parties together to defeat the BJP. The Congress is in the process of electing its new president and Sonia Gandhi told us we will meet again after the election.”

Nitish said there is a need for all opposition parties to join hands and work together to take the country forward.

“All opposition parties on the same page in the fight against the BJP and discussion on a concrete plan of action will happen later after the election for the post of Congress president,” he told reporters after the meeting.

Call for one ‘main opposition’

Earlier in the day, Nitish had called for uniting all opposition parties, including the Congress and the Left, to take on the BJP and said this “main front of opposition” will ensure that the saffron party loses badly in the 2024 general elections.

“If all non-BJP parties unite, then they can get rid of those who are working to destroy the country,” Nitish said at a mega rally organised by the Indian National Lok Dal (INLD) in Haryana’s Fatehabad to mark former deputy prime minister Devi Lal’s birth anniversary.

He accused the BJP of trying to create “Hindu-Muslim disturbances” in society to benefit politically.

“There is no real Hindu-Muslim conflict in society,” he said, adding that some mischief-makers are there everywhere.

“A large number of Muslims chose to remain in India after the Partition in 1947,” he added.

Nitish suggested that an opposition front cannot be envisaged without the Congress and the Left parties, and urged leaders on the dais, including some with a strong anti-Congress history, to work for a larger unity.

INLD leader Om Prakash Chautala, Shiromani Akali Dal’s Sukhbir Singh Badal, both with a long history of fighting the Congress, were on the stage with other senior leaders such as NCP’s Sharad Pawar, CPI(M)’s Sitaram Yechury and Arvind Sawant of the Shiv Sena.

Bihar Deputy Chief Minister and RJD leader Tejashwi Yadav were also on the stage in what was seen as a step towards unity among non-BJP parties.

However, no one from the Congress attended the rally.

Nitish asserted that the need of the hour is a main front of all opposition parties and not any third front, a reference to non-BJP and non-Congress parties.

“Then such a front will win handsomely,” he said.

Nitish hits out at BJP

While leaving the rally venue, Nitish told reporters he was not a contender for the prime minister’s post.

“No real work is happening under the BJP government at the Centre,” he alleged, accusing it of imposing its control over different institutions, including the media, to peddle a “one-sided” narrative.

With Home Minister Amit Shah asserting at his rally in Purnea recently that the BJP will win Bihar during the Lok Sabha polls in 2024 and then in the Assembly polls in 2025, Kumar dismissed his claims without naming him.

Seven parties are together in Bihar and the BJP is all alone, the Janata Dal (United) leader said, adding that the BJP can’t win in the elections.