A recent study has named Delhi and Kolkata the most-polluted cities across the world in terms of ambient fine particle air pollution.

According to the report, published by the Health Effects Institute’s (HEI) State of Global Air Initiative, while Delhi’s average annual population-weighed PM 2.5 exposure stood at 110 micrograms per cubic metre – 22 times the 5 µg/m³ benchmark set by the World Health Organisation, or WHO, – Kolkata came in second with 84 µg/m³.

Also read: No data on direct correlation between health and air pollution: Govt 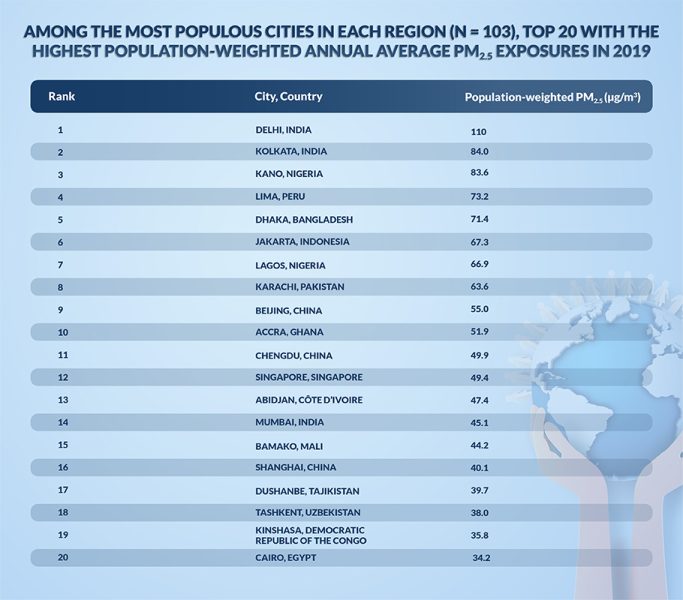 The study, conducted in 2019, covered 7,239 global cities, finally narrowing down on 103 most-populous cities across six regions for the ranking.

Exposure to ambient NO2

China’s largest city Shanghai came first in terms of exposure to ambient nitrogen dioxide (NO2), reporting 41.6 µg/m³, four times the WHO prescribed standard of 10 µg/m³. In fact, four Chinese cities figured in the top 20 list of cities most-polluted by NO2.

The report, titled ‘Air Quality and Health in Cities’, said India and Indonesia have witnessed the most rapid rise in PM 2.5 pollution, while China reported an improvement in its PM 2.5 levels over the past decade.

In contrast, all the 20 cities which reported the maximum decline in PM 2.5 pollution in the decade were in China.

While the reasons behind PM 2.5 pollution may vary from one region to another, the report said the common sources are fossil fuel-based energy generation, industrial activities and fumes from vehicles.

In low and middle-income countries, burning of coal and wood for cooking and heating in households as well as waste burning, and dust from construction sites contribute to ambient fine particle air pollution.

The report says cities in East, South and Central Asia as well as those in Central and Eastern Europe have reported a high disease burden from PM 2.5 exposure.

Beijing ranked first in terms of logging the most deaths (124 attributable deaths per 1 lakh people) caused by disease linked with PM 2.5 exposure. While five Chinese cities were in the top 20 list, Delhi ranked sixth with 106 deaths (per 100,000) while Kolkata came eighth with 99 deaths. 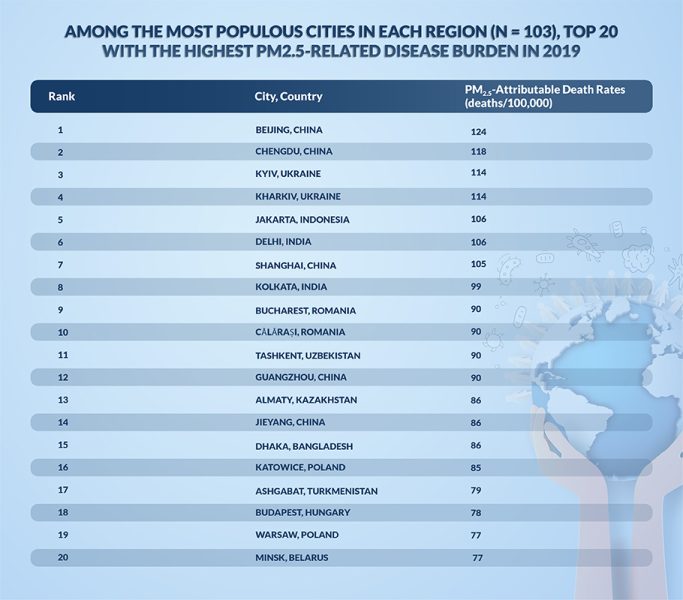 “The burden on health of PM2.5 has grown rapidly in cities in Southeast Asia. Of 7,239 cities analyzed, all the 20 cities with the largest increase in PM2.5-attributable death rates from 2010 to 2019 are located in Southeast Asia, including 19 cities in Indonesia and one in Malaysia. All 20 cities reported increases of more than 10 μg/m3 in PM2.5 exposures in 2019 compared with 20,” the report said.

It said that long-term exposure to PM 2.5 pollution could cause illness or early death from diseases such as ischemic heart disease, lung cancer, COPD, respiratory infections like pneumonia, stroke Type 2 diabetes, and adverse birth outcomes.

The report said while the overall PM 2.5 exposures have declined in several cities between 2010 and 2019, there is an urgent need for improved local air quality monitoring infrastructure worldwide to bring it down further.

Pointing to unavailability of data in low and middle-income countries, the report said only 177 countries have ground-level monitoring systems to track PM 2.5 while only 74 are able to monitor NO2 levels.

“Many cities around the world lack local data on air quality. Based on the 2022 WHO Air Quality Database, of the 20 cities with the steepest increases in PM2.5 exposures in our data, only two (Satna and Varanasi in India) have an official monitoring station at ground level. This fact points to the need for improved local air quality monitoring infrastructure worldwide. Although data such as those presented here — based on ground monitors, satellite data, and models — can provide valuable insights, local air quality monitoring is important for validating and improving such estimates, tracking impacts of local interventions, and increasing local awareness and engagement,” the report said.