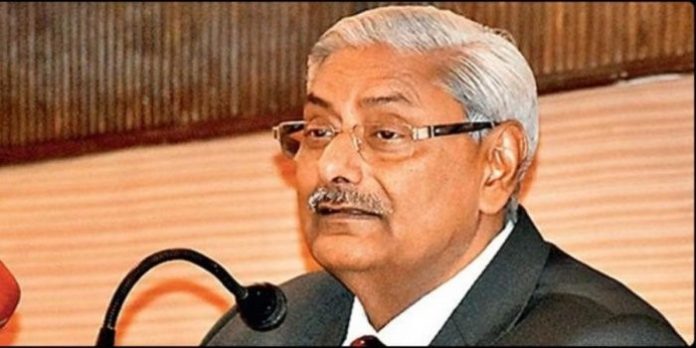 Last year, Justice Mishra as a sitting judge had referred to PM Modi as a "versatile genius", a comment that drew flak from the Supreme Court Bar Association

The head of the country’s human rights body, Justice Arun Mishra, today (October 12) eulogised the Union Home Minister Amit Shah on a public platform for solely ushering in a “new era in Jammu and Kashmir”.

It is because of you, that a new era has begun in Jammu and Kashmir, blithely said Justice Mishra, speaking at an event to mark 28 years of the National Human Rights Commission (NHRC). Justice Mishra, who is a retired Supreme Court judge is currently heading the NHRC, a post he was given nine months after his retirement and which had raised a lot of consternation in many circles at that time, said media reports.

Justice Mishra went on to add that egged on by international forces and at their “behest”, it had become the “norm” to accuse India of human rights violations, said a NDTV report.

PM Modi took the stage to hit out “some” people who have a “selective” approach to human rights and viewed it with an eye on political gains and loss. According to media reports, PM Modi said that some people see human rights violations in some incidents but not in other similar incidents.

“Human rights are violated when viewed via political spectacles. Selective behaviour is harmful to democracy,” asserted the Prime Minister.

Not the first time for Justice Mishra

While praising Shah, Justice Mishra was referring to the government’s sweeping and significant move to end special status for Jammu and Kashmir under Article 370 and downgrade the states into two Union Territories in 2019. It was Shah, who had led the move in Parliament.

This is not the first time the retired SC judge was heaping praise on the ruling establishment. Last year, as a sitting judge he had referred to PM Modi as a “versatile genius” and and an “internationally acclaimed visionary who can think globally and act locally”.

His comment, made at an international judicial conference in January 2020, had embarrassed many in the judiciary who saw it as a declaration of his closeness to the ruling regime. His remark drew flak from the Supreme Court Bar Association, which said in a statement that his comments reflected “poorly on the independence of the judiciary”, said a Deccan Herald report.

The NHRC was created by an Act of Parliament —The Protection of Human Rights (PHR) Act, 1993 — as an autonomous institution which could conduct inquiries into complaints of abuse and human rights violations by a public servant, the State or its agencies.

This is the first time that someone other than a former Chief Justice of India was appointed to the post of NHRC Chairperson. This was possible due to an amendment to the The Protection of Human Rrights Act in 2019.

At that time, many people publicly expressed their reservations over this move. In fact, Rajya Sabha Leader of Opposition, Mallikarjun Kharge, who had been part of the high-powered committee to appoint a chairperson for the NHRC, had condemned the decision on Twitter and said it smacked off “partisanship and quid pro quo”.