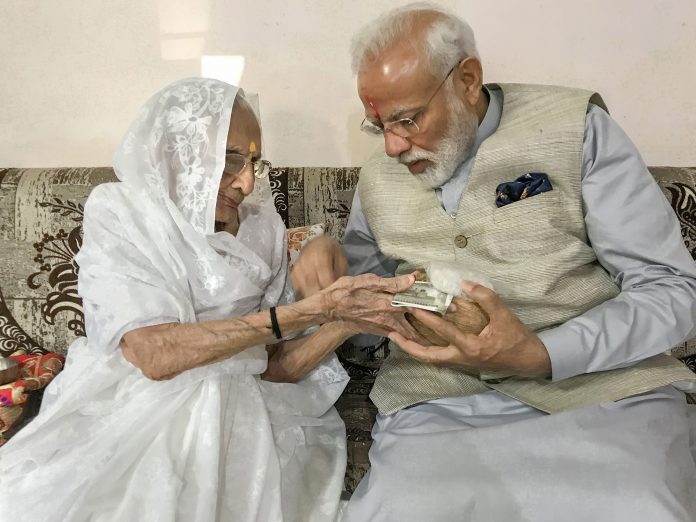 Before heading to a polling booth in the Ranip area of Ahmedabad to cast his vote, Prime Minister Narendra Modi on Tuesday (April 23) visited his mother Hiraba Modi at her residence in Raisan village to seek her blessings.

At the polling booth the Prime Minister appealed to people to come out in large numbers to exercise their franchise. After casting his ballot, Modi said the “voter ID” (identity card) was much more powerful than the “IED” (improvised explosive device) of terrorists.

It feels great to be taking part in our democratic process. pic.twitter.com/b3g8CT7t7A

He arrived at the polling station set up in Nishan High School, in the Ranip area of Gujarat’s Ahmedabad city, in an open jeep in the morning and exercised his democratic right. BJP president Amit Shah, who is contesting the Lok Sabha election from the Gandhinagar seat, welcomed him outside the school and accompanied him to the booth. “I feel blessed to have exercised my franchise in this biggest festival of democracy. The power of the voter ID is much more than IED of terrorism,” Modi later said, and urged people to come out in large numbers to vote in the ongoing Lok Sabha polls.

While arriving at the polling booth, he greeted thousands of people who had gathered on both sides of the road. After casting his vote, Modi walked some distance from the polling booth and later had a brief interaction with media persons.
Modi spent around 20 minutes with his mother, a nonagenarian, who lives with her younger son Pankaj Modi at Raisan village located close to Gandhinagar. Hiraba Modi gave him a shawl, sweets and a coconut as a goodwill gesture and her blessings for his victory in the ongoing Lok Sabha polls.

The PM stayed at the Raj Bhavan in Gandhinagar overnight and in the morning went in a limited SPG security cover with only one vehicle to seek his mother’s blessings.

After meeting his mother, he also briefly interacted with the society’s residents and allowed children to take selfies with him, before leaving for a school at Ranip to cast his vote. Talking about their interaction, the excited residents of the locality said the prime minister urged them to vote. Polling in all 26 Lok Sabha seats in Gujarat is being held in a single phase on Tuesday.