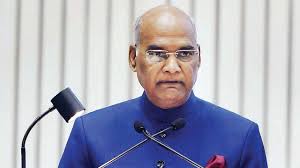 Expressing outrage over the “use” of the armed forces for “political purposes,” over 150 military veterans have written to President Ram Nath Kovind seeking his intervention in preserving the apolitical character of the services.

The letter, dated April 11, carries the names of eight former service chiefs but two of them — former Army chief General (retd) S F Rodrigues and Air Chief Marshal (retd) N C Suri — said they have not signed it.Former Army vice chief Lt Gen (retd) M L Naidu also said his consent was not taken before listing his name as one of the signatories.

The veterans said they chose to write to the president as he is the custodian of the Constitution as well as the supreme commander of the armed forces. Referring to Rodrigues and Suri denying signing the letter, Defence Minister Nirmala Sitharaman called the allegations “fake.” “It is absolutely condemnable that names were mentioned without taking permission,” she said.

The letter cites several examples of the military being used for political purposes, including Uttar Pradesh Chief Minister Yogi Adityanath referring to the armed forces as “Modiji ki Sena” and the display of images of Wing Commander Abhinav Varthaman at political events.

Varthaman was captured by Pakistan after an air combat with India and subsequently released. In their rallies, Prime Minister Narendra Modi and a number of BJP leaders have been referring to IAF’s Balakot strikes besides mentioning the valour of the armed forces in defending the country.

The Election Commission has already taken note of the PM’s comments asking first-time voters to dedicate their votes to those who carried out the air strike in Balakot. “We refer, Sir, to the unusual and completely unacceptable practice of political leaders taking credit for military operations like cross-border strikes and even going so far as to claim the armed forces to be “Modi ji ki sena,” the veterans wrote. “This is in addition to media pictures of election platforms and campaigns in which party workers are seen wearing military uniforms and posters and images with pictures of soldiers and specially of Indian Air Force Wing Commander Abhinav Varthaman, displayed,” according to the letter.

They said such misuse of the armed forces would impinge adversely on the morale and fighting efficiency of the serving men and women in the uniform. “It could, therefore, directly affect national security and national integrity. We, therefore, appeal to you to ensure that the secular and apolitical character of our armed forces is preserved,” the letter says.

The veterans urged the president to take all necessary steps and urgently direct all political parties to desist from using the military for political purposes or to further their political agendas.”

The letter also lists former Navy chiefs Admiral (retired) L Ramdas, Admiral (retired) Arun Prakash and Admiral (retired) Vishnu Bhagwat as signatories. It mentions the Election Commission’s notifications to those violating the model code of conduct, including to Adiyanath, but adds that the actions don’t have any impact on the ground. “Indeed a notification has been issued asking for an explanation for those responsible for these statements including from the Chief Minister of Uttar Pradesh,” the letter says.

“However, we regret to state that these do not appear to have resulted in any substantive change of behaviour or practice on the ground,” it adds.

In his reaction, Air Chief Marshal (retired) Suri said armed forces are apolitical and they report to the democratically elected government. He added that his consent was not taken before his name was mentioned in the letter.

In a first, Twitter adds fact-check warnings to Trump tweets