When Captain Tania Sher Gill led all-men contingents during the majestic Army Day parade, the woman officer knew she was blazing a new trail in the armed forces.

Twenty-six-year-old Gill of the Corps of Signals, the fourth generation to serve the Army, became the first woman Parade Adjutant in the history of the Army Day function on Wednesday (January 15). 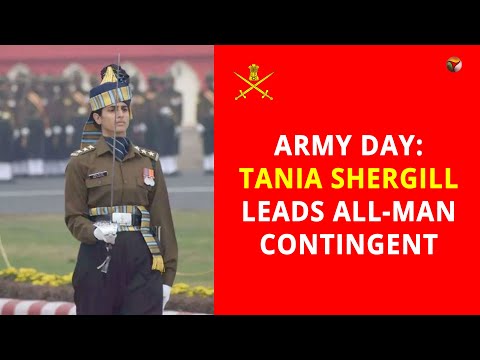 Also watch | What Chief of Defence Staff means to India

Wearing a khaki uniform and holding a ceremonial sword she marched down in front of an august audience at the Cariappa Parade Ground in Delhi Cantonment, she literally stood tall. “It was a feeling of great pride, a sense of accomplishment and worthiness, and pure blessing,” an ecstatic Gill told PTI after the grand event.

A graduate of the Officers Training Academy (OTA), Chennai, Gill comes from a family where “Army tales and anecdotes” were part of dinner table talks and morning walks and joining the armed forces came “very naturally” to her.

“I had applied while I was in the final year of my engineering course and later got selected. After my training at OTA, I got commissioned into the Corps of Signals in 2017. When the selection was on for the Parade Adjutant, I knew that if I would get selected, I would be the first woman to do that job in the parade’s history,” she said.

Hoshiarpur-born Gill, who holds a BTech in electronics and telecommunications from Nagpur University, said her great-grandfather had taken part in the World War I.

The Punjab-born did her schooling in multiple cities and counts photography, travelling, and music among her hobbies.

The Army showcased its military might and some of its state-of-the-art assets during the majestic parade, with artillery gun systems Dhanush and K9-Vajra taking part in it for the first time, officials said.

Capt Gill led all-men contingents during the parade, drawing praise from senior officers and loud cheers from the audience, which included members of the diplomatic corps.