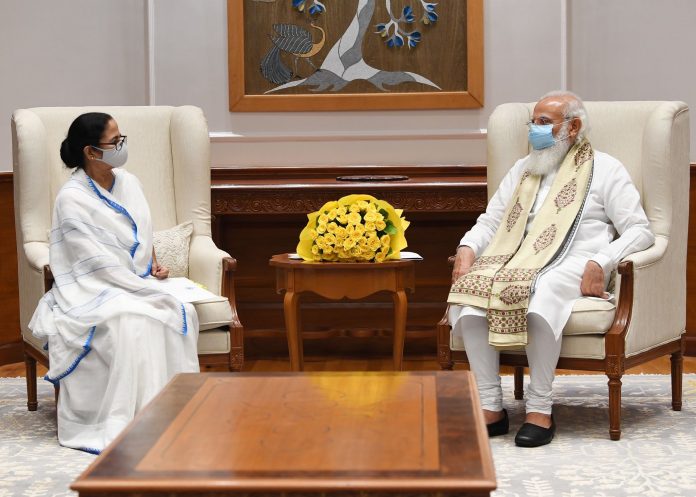 Bengal CM Mamata Banerjee said she took up with the PM the COVID vaccine supply and availabity of medicines to her state. Photo: Twitter

The emerging pivot of anti-BJP forces, Mamata Banerjee, on Wednesday (July 27) met Prime Minister Modi – her first interaction since the rancorous West Bengal polls. She later told the media that there should be a Supreme Court-monitored probe into the Pegasus snooping scandal.

She also said that the PM should call for an all-party meeting on the row.

The Trinamool Congress leader on Tuesday (July 26) announced a judicial probe led by former Supreme Court judges — the first since the Pegasus scandal broke — to inquire into reports that many Bengal leaders, including her nephew Abhishek Banerjee, are among the potential targets.

Opposition leaders, two Union ministers and 40 journalists were allegedly targeted in the surveillance through Israeli Pegasus spyware that is sold only to governments. The scandal has virtually stalemated the monsoon session of Parliament amid the opposition’s repeated demands for answers from PM Modi and Home Minister Amit Shah.

Media reports said the Chief Minister described her meeting with the PM as a “courtesy visit.” She discussed the COVID situation, the vaccines supply and the availability of medicines for the state. She also talked about the proposal to change the name of her state as Bangla. “I should not speak what the PM said,” she said.

She was also supposed to meet President Ram Nath Kovind. “But they are asking me to have an RT-PCR done before meeting him. I have got both the doses, though. Where will I go here,” she asked.

The CM is expected to meet Congress chief Sonia Gandhi on Thursday (July 28) on the second day of her three-day stay in the national capital. Mamata is also scheduled to meet Delhi Chief Minister Arvind Kejriwal.

On July 27 Mamata met Congress leaders Kamal Nath and Anand Sharma. Samajwadi Party leader Akhilesh Yadav is also likely to call on her. “I will also have a meeting with Javed Akhtar and Shabana Azmi,” she told reporters.

Buoyed by her impressive victory in the Assembly polls, many opposition leaders have projected the West Bengal CM as a key figure in the proposed anti-Modi front for the 2024 general election.