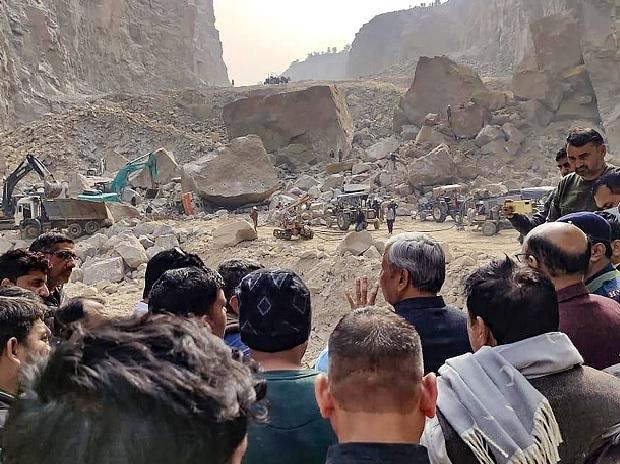 Officials watch as rescue work in on at the Dadam mining area of Bhiwani district after the landslide incident. Pic: PTI

Four people have been killed and many others are feared trapped following a landslide at the Dadam mining site in Bhiwani district of Haryana on Saturday (January 1). The workers were reportedly travelling to another site when the landslide took place and they got trapped in their vehicles.

Haryana Home Minister Anil Vij said several rescue teams have been pressed into service for rescue work. In a tweet, the minister gave more information about the death toll.

“I am deeply saddened over the incident that took place at the mining site in Bhiwani district of Haryana. The rescue operation is being run by the administration. National Disaster Response Force (NDRF) team from Ghaziabad, State Disaster Response Force (SDRF) from Madhuban and an army unit from Hisar have been called. So far, four people have died,” Vij confirmed in the tweet.

Police said around half-a-dozen dumper trucks and some machines were buried under the debris caused by the landslide which occurred around 9 am in Tosham block. The Bhiwani Chief Medical Officer Raghuvir Shandilya had earlier said that Toofan Sharma (30), a native of Bihar and Binder (23), who hailed from Baganwala in Haryanas Jind district, have died in the incident, said agency reports.

Deputy Superintendent of Police (Siwani) Manoj Kumar said four to five people may still be trapped under the debris. Some locals, however, claimed that the number of those trapped could be more but there was no official confirmation on this.

State minister J P Dalal took stock of the situation and told reporters that the administration’s priority was to rescue the trapped people and that a team of doctors had arrived at the site. Congress leader Randeep Singh Surjewala alleged that illegal mining was going on under the Khattar regime and asked the BJP government who was responsible for these deaths. In a tweet, he also asked the state government if it would order a judicial probe into the alleged mining racket.

Meanwhile, media reports said that mining activities have restarted in a big way in the  Dadam mining area and Khanak Pahari after the National Green Tribunal lifted its ban on mining work in the area. There was a two-month ban, which had been imposed by the green court because of the pollution caused by the mining work. This ban was lifted on Thursday (December 30) and the mining work resumed only on Friday.