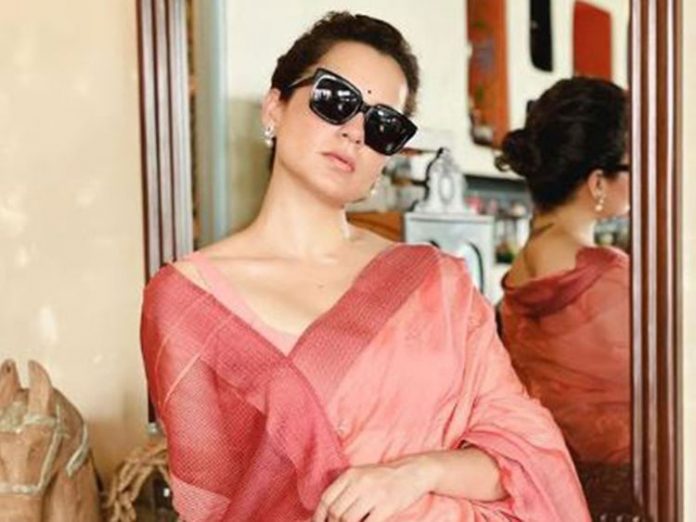 Undaunted by the outrage against her, Kangana Ranaut challenged anyone to enlighten her on what war happened in 1947. And if they did she was ready to return her Padma Shri . Pic Twitter

The queen of controversy, Bollywood actor Kangana Ranaut, whose effigies are being burnt for describing India’s independence as “bheek” dropped in the Congress bowl, continues to fish in troubled waters on Saturday (November 13). This time, she alleges that Mahatma Gandhi let Bhagat Singh die and did not support Subhas Chandra Bose.

Undaunted by the outrage and anger she has stirred up among many sections of society, the actor, also challenged anyone to “enlighten” her on what war happened in 1947. And that if someone could answer her questions she was ready to return her Padma Shri.

Ranaut set the cat among the pigeons on Wednesday when she said at an event organised by a news channel, that India had attained “real freedom” only in 2014, when the Narendra Modi-led government came to power, and declaring that Independence in 1947 was bheek or alms. Politicians, including BJP leaders, historians, academics, fellow actors, the twitterati and others, slammed her and she attracted a lot of flak. Groups protested outside her house and many political leaders demanded that the Padma Shri awarded to her recently should be taken back.

However, the actor, who is known for making provocative and controversial statements kept up the momentum on Saturday by taking to Instagram Stories to share some excerpts from a book “just to set the records straight”.

She shared a passage from a book quoting freedom fighters, including Bal Gangadhar Tilak, Aurobindo Ghosh and Bipin Chandra Pal, saying that she was aware of the “collective fight for freedom” of 1857 but nothing about a war in 1947. She wanted to set the record right and in her view, the first collective fight for freedom along with sacrifice of greats like Subhash Chandra Bose, Rani Laxmibai and Veer Savarkar ji happened in 1857.

Feigning ignorance of the non-violent struggle of independence, the actress wrote,“…1857 I know but which war took place in 1947 I am not aware, if someone can bring to my awareness I will give back my Padma Shri and apologise also… please help me with this (sic).” The actress, who was last seen on celluloid essaying the role of the late former Tamil Nadu Chief Minister, J Jayalalithaa in ‘Thalaivii’, has always been an ardent supporter of Prime Minister Narendra Modi.

In her lengthy Instagram post on Saturday, like a bull let loose in a China shop, she wrote that she had done a lot of research on the 1857 war of independence when she worked on her 2019 period movie “Manikarnika: The Queen of Jhansi” on Rani Lakshmi Bai. At that time, she said nationalism and the right wing had risen and went on to question, “but why it died a sudden death? And why Gandhi let Bhagat Singh die… why Neta Bose was killed and never got Gandhi ji’s support? why line of partition was drawn by a white man… ?” 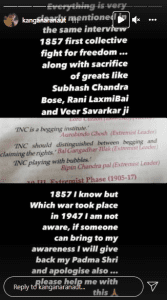 Also, she demanded to know why instead of celebrating freedom Indians were killing each other and these are some of the answers she seeks. “…please help me find answers (sic)”, she wrote cheekily.

Kangana also lambasted the British for having looted to the “point of saturation”. And went on to give her version of how Indian history would have turned out if even a “small fight by the INA” would have got India freedom and Bose could have been become prime minister. She went on to ask people to shed light (since she was in the dark) about why freedom was placed in the begging bowl of Congress when the right wing was all along prepared to fight and take it.

“Can someone please help me understand (sic),” she wrote, adding that she would return her Padma Shri if anyone gave her the answers to these questions and also prove that she had disrespected martyrs and freedom fighters.

Many political leaders continued to attack her and felt she was insulting the freedom fighters of our country.  In Jodhpur, the Mahila Congress lodged a police complaint against Ranaut. Jodhpur Mahila Congress Committee president Manisha Panwar in the complaint said Ranaut insulted freedom fighters and people of the country through her statement, which falls under the “category of sedition”, said a News18 report.

One of the early criticisms against her controversial remarks came from Delhi BJP leader Praveen Shankar Kapoor, who said in a tweet in Hindi on Thursday, “Being the son of a freedom fighter and coming from a family of freedom fighters, I find Kangana Ranaut’s remarks that India’s freedom was alms (bheekh) as the biggest misuse of freedom and an insult to the sacrifice made by freedom fighters. I wish the judicial system of India takes cognizance.”

While Nawab Malik accused her of taking a heavy dose of Malana cream (a variety of hashish grown in Himachal Pradesh) before making such a statement, in Indore, a group comprising the kin of freedom fighters were in no mood to humour her and set an effigy of the actor on fire.

Meanwhile, the Aam Aadmi Party had submitted an application to the Mumbai Police demanding a case against her for “seditious and inflammatory” comments.

In her Instagram post, Kangana also explained what she had meant when she said India got “freedom in 2014”. As far as Aazadi in 2014 concerned, she had specifically meant that we may have physical Aazadi but “consciousness and conscience of India was set free in 2014….”

In a poetic language, she wrote that particularly after 2014, a “dead civilisation came alive and fluttered its wings and now roaring and soaring high…” In short, she means India under PM Narendra Modi’s role is flying high. Even BJP leaders have pointed out that she can praise Modi without slamming India’s freedom fighters.

Kangana had also supported Modi after the post-poll violence in West Bengal. She paid for her vitriolic comments by being banished from Twitter. They permanently suspended her for “repeated violation of twitter rules”. She even took on the powerful ruling Shiv Sena government by comparing Mumbai to Pakistan occupied Kashmir.

The actor was also given Y-plus category security by the central government after she said she felt unsafe in Mumbai following the death of actor Sushant Singh Rajput and also spoke of drug use in a section of the film industry.