Kamala Harris’ reference to her ‘Chithis’ in the US democratic acceptance speech on Wednesday (August 19) has taken the internet by storm. Kamala in her speech said, “Family is my uncles, aunts and chithis,” referring to her mother’s younger sister Sarala Gopalan who lives in Chennai. ‘Chithi’ is the tamil word for aunt.

#Video | The internet has been taken by storm over #KamalaHarris' reference to 'Chithis' in her acceptance speech at the US Democratic National Convention. pic.twitter.com/CeiUl8aRk0

The usage of a Tamil word by Kamala Harris in her speech has left many Indian Americans and Indians emotional. Many took to Twitter to express how the word’s usage in her speech came as a pleasant surprise.

Kamala Harris said "Family is my uncles, my aunts and my chithis" – it's a Tamil word (chithi/சித்தி) meaning "Mother's younger sister" entire Tamil speaking folks are feeling amazed about it. Tamil is one of the ancient languages which is still alive!

I literally have tears in my eyes. @KamalaHarris just said “chithis” which means auntie. My heart is so full right now

Netizens are also sharing memes and jokes connecting Kamala’s speech with Radikaa Sarathkumar’s iconic daily soap ‘Chithi’. The soap opera was one of the most popular Tamil shows that premiered on December 20, 1999 airing over 460 episodes. The fame and fan base compelled the channel Sun TV to come up with the second season of the mega serial. The success of the serial and ‘chithi’ character is also considered to have redefined actor Radikaa’s career.

Now, @realradikaa can make a few more sequels to Chithi and run it for the next 20 years on Sun TV ?#Sentiment #Chithi2 https://t.co/5dJBuFXuKK

Senator Kamala Harris accepted the Democratic Party’s nomination to be the vice president of the United States on Wednesday at the virtual Democratic National Convention. “I accept your nomination for vice president of the United States of America,” she said in her acceptance speech. She scripted history by becoming the first Indian-American and also the first Black woman to be on a major political party’s national ticket. 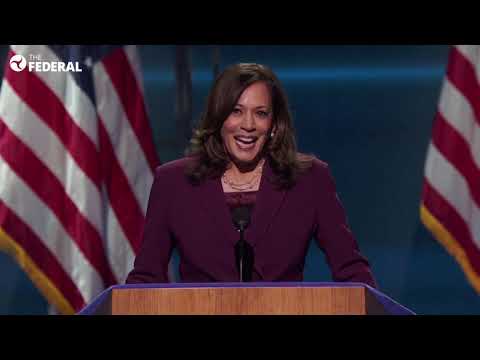 She profoundly remembered her mother from Tamil Nadu. Harris said she was there standing on her mother’s shoulders, a woman who came to the United States from India at the age of 19 to pursue her dream of curing cancer. She even tweeted saying her mother instilled values in her that charted the course of her life.