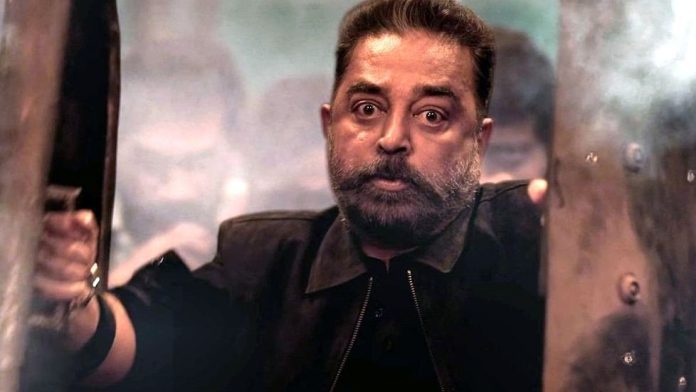 The Disney+Hotstar promo shows a nattily-dressed Kamal Haasan walking into a den full of guns and picking out one to say: "Even if you watch a film you like any number of times, it is not enough, is it?" Pathugalam!

As action spy thriller Vikram storms ahead moving onto to its 5th week, breaking several box-office records along the way, the good news for fans is that it will start streaming on Disney+Hotstar from July 8.

Disney+ Hotstar shared the digital release announcement of the film on Instagram on Wednesday (June 29). The promo shows a nattily-dressed Kamal Haasan walking into a den full of guns and picking out one to say: “Even if you watch a film you like any number of times, it is not enough, is it?” And, he says a dialogue from Vikram, ‘Pathugalam’ and starts shooting at a door which opens to reveal Disney+Hotstar.

According to a statement issued by the makers of Vikram, Disney+Hotstar had actually kickstarted the Vikram carnival by showing ‘Kaithi’ on their platform. Hard-core movie buffs first saw this film before watching Vikram to get a better understanding of the connection between these two worlds. Lokesh is expected to expand the world of Vikram in his new films.

Written and directed by Lokesh Kanagaraj, this Kamal Haasan-Vijay Sethupathi-Fahadh Faasil-Suriya starrer, released in theatres across the globe on June 3 in Tamil, Telugu, Malayalam, Kannada and Hindi. It has become a top grosser raking in over ₹400 crore gross at the box office. According to experts, the film has raked in more than ₹172 crore in Tamil Nadu, ₹39 crore in Kerala, ₹38 crore in the Telugu states, over ₹24 crore in Karnataka and ₹16.5 crore in the Hindi belt.

The success of the film, which tells the high-octane action tale of Vikram, a former undercover agent who leads a vigilante group to track down drug traffickers, has got the trade circles too by surprise. Fans are going wild with the Haasan’s rejevunated action avatar, Faasil’s sparkling performance and Sethupathi’s terrorising antagonist act.

Besides, filmmaker Lokesh Kanagaraj has effectively built a Lokesh Cinematic Universe (LCU), by bringing in a few surprise characters from Karthik’s ‘Kaithi’, who will be seen in the future as well. Haasan has backed the movie through his production banner Raaj Kamal Films International. Kalidas Jayaram, Narain, Antony Varghese and Arjun Das also round up the cast of “Vikram”, along with Suriya in a cameo.