The Indian Navy on Friday decommissioned the Kashin-class destroyer INS Rajput, the first warship to be fitted with long-range BrahMos missile, after 41 years of service.

The destroyer, built by the erstwhile USSR and commissioned in 1980, was part of both the Western and Eastern fleets.

Navy spokesperson Commander Vivek Madhwal said the warship was decommissioned in a low-key ceremony at the Visakhapatnam dockyard. 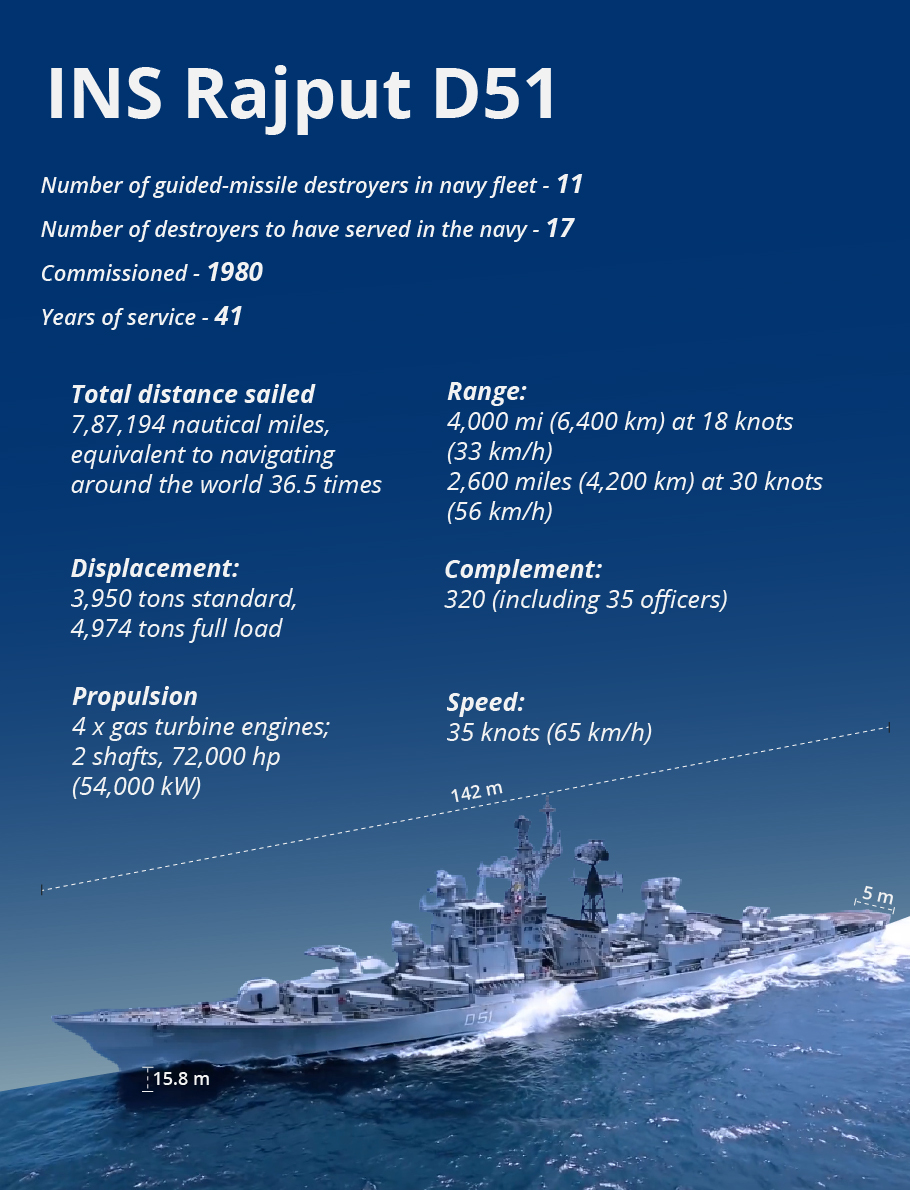 “In her glorious service to the nation, the ship has been helmed by 31 commanding officers. The ship, since its commissioning, sailed a distance of over 7,87,194 nautical miles, which is equivalent to navigating around the world 36.5 times and 3.8 times the distance from Earth to Moon,” he said in a statement.

Besides BrahMos, the warship was equipped with an array of weapons and sensors including anti-aircraft guns, torpedoes, and anti-submarine rocket launchers.

The ship had the motto ‘Raj Karega Rajput’, and she participated in several key missions, including operation Aman off Sri Lanka, which was launched to assist the Indian Peace Keeping Forces, and Operation Cactus to resolve a hostage situation off the Maldives.

In addition, it participated in numerous bilateral and multinational exercises. It was also the first Indian naval ship to be affiliated with an army regiment – the Rajput Regiment.

INS Rajput was constructed in the 61 Communards shipyard in Nikolaev (now Ukraine) under her original Russian name Nadezhniy, meaning ‘hope’. The keel of the ship was laid on September 11, 1976, and she was launched on September 17, 1977.

The ship was commissioned as INS Rajput at Poti, Georgia, by IK Gujral, the then Indian ambassador to the USSR, with Captain Gulab Mohanlal Hiranandani as her first commanding officer.

“The ship was decommissioned in a solemn and low-key event due to the coronavirus pandemic when the national flag, naval ensign and the decommissioning pennant were lowered at sunset time in the presence of Vice Admiral Ajendra Bahadur Singh, the flag officer commanding-in-chief eastern naval command,” Commander Madhwal said.

The Kashin class were series of anti-aircraft guided missile destroyers built for the Soviet Navy starting in the 1960s. They were the first Soviet purpose-built anti-air warfare ships.

During the 1980s, India signed an agreement with the USSR for five guided-missile destroyers built under Kashin class.

Seventeen destroyers have served, or currently serve, in the Indian Navy. The navy operates 11 guided-missile destroyers from three classes, including the Kashin class

Destroyers were introduced in the early 20th century and were widely used towards the end of the Second World War. India had no destroyers until 1949. The R-class INS Ranjit, built in Britain, was the first destroyer commissioned in the Indian Navy.