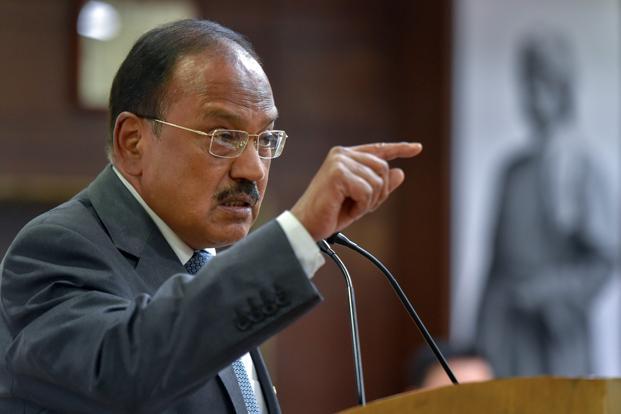 Ajit Doval was present at the meeting of the national security chiefs held in Tajikistan capital Dushanbe. His Pakistan and Afghanistan counterparts were represented by Moeed Yusuf and Hamdullah Mohib, respectively | File Photo

National Security Advisor Ajit Doval was present at the meeting of the national security chiefs held in Tajikistan capital Dushanbe. His Pakistan and Afghanistan counterparts were represented by Moeed Yusuf and Hamdullah Mohib, respectively.

Doval said there was a need to monitor new technologies used by terrorists, including drones, for smuggling of weapons and misuse of  dark web (encrypted online content), artificial intelligence, blockchain and the social media.

Also read: Ajit Doval, the man behind breakthroughs with China and Pak

The Indian NSA strongly condemned terrorism in all forms and manifestations, and stressed the need for full implementation of United Nations resolutions and targeted sanctions against UN-designated terrorist individuals and entities. He said that perpetrators of terrorism including cross-border terror attacks, should be expeditiously brought to justice, Hindustan Times reported.

He also said that there is a need to preserve gains made in the last two decades in Afghanistan and give top priority to the welfare of its people. “India fully supports SCO Contact Group on Afghanistan, which should be more active,” said Doval.

India and Pakistan became SCO members in 2017. New Delhi has physical, spiritual, cultural and philosophical inter-linkages for centuries with countries that now make up the SCO, Doval said.

The SCO was founded in Shanghai in 2001 by Russia, China, Kyrgyz Republic, Kazakhstan, Tajikistan and Uzbekistan.

New Delhi is keen on deepening its security-related cooperation with the SCO and its Regional Anti-Terrorism Structure, which specifically deals with issues relating to security and defence.

India was made an observer at the SCO in 2005 and has generally participated in the ministerial-level meetings of the grouping, which focus mainly on security and economic cooperation in the Eurasian region.

Doval’s remark came on a day when a blast rocked a residential colony in Lahore where proscribed Jamaat-ud-Dawa mastermind Hafiz Sayeed’s house is located. Three people, including a security man, were killed and more than 20 were injured in what was suspected to be a suicide attack. Sayeed is a suspect in the 26/11 Mumbai terror attack.