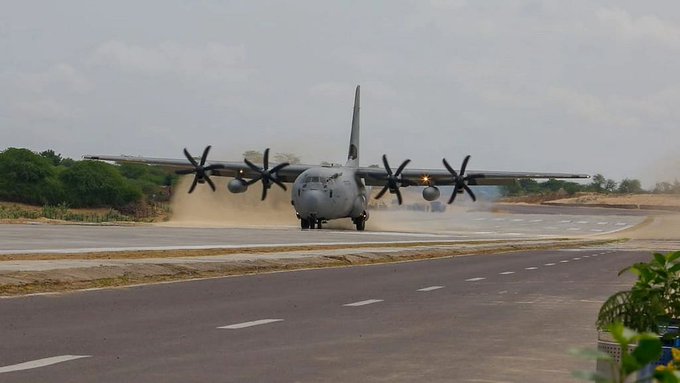 Nitin Gadkari revealed he had told the IAF chief 'we will construct these (airstrip) for you in 15 days.'

Talking about the construction of the strip at the opening ceremony, Gadkari told the media that IAF chief RKS Bhadauria had informed him that it usually took one-and-a-half years to build an airstrip. “I told him that we will construct these for you in 15 days… of good quality,” he said.

He further enumerated his ministry’s achievements  — three world records: “Despite Covid-19, we constructed 38km of road per day — highest in the world. Second is the construction of a 2.5-km 4-lane road in 24 hours on the Mumbai-Delhi express highway. The third refers to the construction of a 26-km single lane road from Bijapur to Solapur in a day.”

The Barmer strip was reportedly built over a period of 19 months on NH 925, the first to be used for emergency landing. A Hercules C-130J IAF plane, carrying Gadkari, Union minister Rajnath Singh and Chief of Defence Staff (CDS) Bipin Rawat, on Thursday conducted a mock emergency landing on the stretch. An-32 military transport aircraft and Mi-17v5 helicopter of the IAF were also part of the demonstrations.

“Whenever an out-of-the-box idea is proposed, apprehensions emerge. But (we are) glad for support from the Defence Ministry and air force that has led to the successful launch of this 3-km road-cum-air strip,” the highways minister said.

He also pointed out that “there’s no airport here in an area of around 350km. I told CDS Bipin Rawat that we can give land to build a defence airport and a civil airport nearby. They have our full support and will take guidance from the air force authority”.

Apart from these, three helipads have been constructed in Rajasthan’s Kundan Pura, Singhaniya and Bakasar villages, and more are in the offing.

Defence minister Rajnath Singh also spoke at the occasion, revealing that as many as 20 emergency landing strips, similar to the one in Barmer, were being developed across India, and would be of help not just in wartime but also in relief operations during any disaster.

“This is an important step to strengthen our security infrastructure. By creating a strip so near the international border, we have given a message that we will stand up for unity, diversity and sovereignty of our country at whatever the cost,” the defence minister said, lamenting that “there was this thinking that if much is spent on defence, then development in the country would be affected”.

Singh further insisted that “defence and development can go hand-in-hand”. “Such creation of an emergency landing strip creates immense sense of confidence in the Indian psyche,” he said.

The highway on which the landing strip has been made is expected to improve connectivity between the villages of Barmer and Jalore districts located on the international border, and the landing strip will otherwise be used to regulate road traffic.