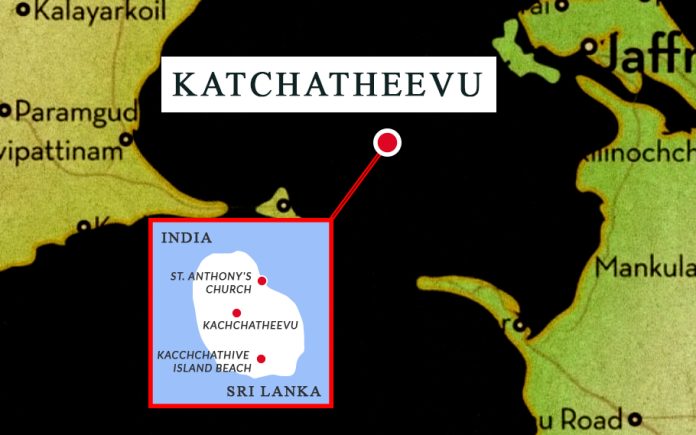 During the recent visit of Prime Minister Narendra Modi to Tamil Nadu, one of the key requests made to him by Chief Minister MK Stalin was to reclaim Katchatheevu island from Sri Lanka, a longstanding demand made by the state’s fishermen to stop the detention and killing of their brethren by the Lankan navy.

The uninhabited island, situated on the Sri Lankan side of the maritime boundary in the Indian Ocean, was ceded to Lanka by then Prime Minister Indira Gandhi under the Indo-Sri Lankan Maritime agreement in 1974. While the waters were traditionally used both by Indian and Sri Lankan fishermen, the agreement signed in 1976 restricts both the sides from fishing in each other’s economic zones.

Representatives of the fishermen community in Tamil Nadu say that reclaiming the island from Sri Lanka alone would not help resovle their problems.

“Reclaiming Katchatheevu would certainly benefit our fishermen. However, it alone would not solve the problems of our fishermen because it has various other dimensions such as rampant use of trawlers in the Pak Strait,” M Ilango, chairperson, National Fisherfolk Forum, told The Federal.

Located in the Palk Strait, the 285 acre Katchatheevu is an uninhabited island which was shared by India and Sri Lanka during British rule. It was claimed by Tamil Nadu fishermen, who enjoyed traditional fishing rights in and around the island. Historical evidence shows that the island was once controlled by the Raja of Ramnad.

From the 1920s, Sri Lanka started claiming complete ownership of the island and it continued till 1974, when India ceded the island to the former under the Indo-Sri Lankan Maritime pact. The agreement barred Tamil Nadu from claiming ownership over the island. Fishermen, however, were allowed to continue fishing activities and participate in the St Anthony’s church festival held every March. (St Anthony is considered the guardian angel of fishermen.)

Following the agreement, the then DMK government passed a resolution in the Assembly against the pact. However, the resolution had no legal validity and didn’t restrain the Centre from sticking to the agreement.

In 1976, another agreement was signed between the two countries while determining the boundaries of the Gulf of Mannar and the Bay of Bengal. At that point of time, the Emergency was in place and subsequently the Tamil Nadu government got dismissed. Since there was no state government, there was no one to oppose the Centre’s ceding of full rights over the island.

One might think that it would be the right time for India to stake claim on the island, with Sri Lanka reeling under a severe economic crisis and political upheaval. But geopolitical experts say it is easier said than done.

Talking to The Federal, Dr V Suryanarayan, founder, Centre for South and Southeast Asian Studies, University of Madras, said reclaiming the island involves a constitutional amendment which is near impossible. “When the maritime boundary line is drawn, the median line is taken into account. But in the case of Katchatheevu, there was a deviation while drawing the boundary line and hence it under Sri Lanka’s limits. However, Articles 4 and 5 of the 1974 agreement ensured that Tamil Nadu fishermen were given the continuous traditional right of fishing,” he said.

The Preamble of the 1976 agreement said that the fishermen from both the countries should not enter each other’s waters. The implication was that the traditional right of fishing ensured in the 1974 agreement was abolished, Suryanarayan said.

“Another provision was that Sri Lankan fishermen were given permission to fish near Kanyakumari for three more years. At that time, M Karunanidhi (the DMK patriarch) should have filed a case in the Supreme Court. According to our Constitution, if Indian territory has to be given to another country, an amendment should be made. There is a precedent for such a move. When former Prime Minister Jawaharlal Nehru decided to give away Berubari of West Bengal to Pakistan, then Chief Minister BC Roy went to the Supreme Court to prevent the ceding, and the court ruled in favour of West Bengal,” he added.

An international agreement, however wrong it may be, has some sanctity. India has an agreement with Pakistan on sharing the Indus water. After the agreement, both the countries have waged war against each other. But the truce to share Indus’ water has not been broken, Suryanarayan pointed out.

“If we scrap the international agreement now, the country’s image on the global platform will take a nosedive,” he added.

“The usage of the word retrieval is itself quite wrong. It is not lost because there is an agreement. India can revoke the agreement and go for a fresh agreement,” said Dr N Manoharan, director, Centre for East Asian Studies, Christ University, Bengaluru.

“People in Tamil Nadu think that Katchatheevu is a sell-off. But the truth is, under the agreement, we gained more territory than Sri Lanka. The island was once used by the Tamil Nadu fishermen to dry their nets since those days the nets were made of cotton,” told The Federal.

Manoharan added that the problems faced by Tamil Nadu fishermen are different and unlinked to the Katchztheevu issue. “Even if we reclaim rights over Katchatheevu, the traditional fishermen who use country boats cannot benefit from it, since the trawler boats fully exploit the marine resources in the area,” he said.

The only solution India could think about is to push the island nation to lease out the fishing blocks to Tamil Nadu fishermen; the profit from the same can be shared between the two countries, Manoharan added.

“But that would take efforts both from the Centre and the state, and Sri Lanka should also come on board for dialogue on the matter,” he said.