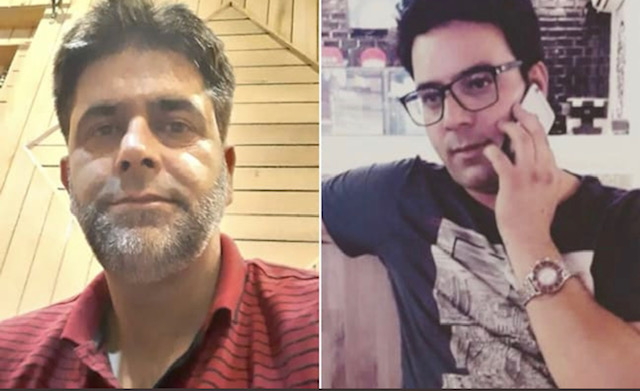 The bodies of Altaf Bhat and Dr Mudasir Gul were exhumed from a remote graveyard in north Kashmir’s Handwara town.

Family members of Mohammad Altaf Bhat, one of the civilians killed in a contested gunfight in Srinagar’s Hyderpora locality on November 15, have demanded a judicial probe while expressing dissatisfaction over the Lieutenant-Governor (L-G) Manoj Sinha-led administration’s decision of a time-bound magisterial probe into the incident.

After three-day-long intense protests, pleas and dramatic scenes in Srinagar, the administration finally gave in to the demand of the victim’s families to get the bodies of Altaf Bhat, 45, and Dr Mudasir Gul exhumed from a remote graveyard in north Kashmir’s Handwara town, and deliver their mortal remains for a decent burial in capital Srinagar.

At least three persons — Mohammad Altaf Bhat, Dr Mudasir Gul and Amir Magray — were killed in a now-controversial shootout at Hyderpora. Families of all the three slain assert that they were civilians.

The J&K Police initially dubbed them either “militant associates” or “hybrid militants”, but later amended their statement at least twice. The police agreed to investigate the case through a Special Investigation Team (SIT), and also hand over the bodies of at least two civilians to their families.

Around midnight on the intervening night of November 18-19, the authorities handed over the bodies of Bhat and Gul to their families. The last rites for both the deceased were performed under cover of darkness amid chilly weather conditions. The mood at the funeral was sombre.

Bhat’s body was lowered into the earth around 1 am at ‘Martyrs Graveyard’ in Srinagar’s old Barzulla area. For the family, though, the burial does not denote closure. They want the perpetrators to be booked and brought to justice so that no civilian in Kashmir is killed in an extrajudicial manner in the future.

“This does not stop here. The government’s decision to hand over the body of my brother and Dr Mudasir Gul is a stamp of approval on their innocence. It is now proven beyond doubt and beyond debate that Altaf sahab and Doctor sahab (Mudasir Gul) were killed in cold blood. These are murders,” one of the siblings of Bhat told The Federal with moist eyes, adding that: “We want justice. Heads should roll. A magisterial inquiry means nothing to us. We want a judicial probe to ascertain all facts so as to identify the perpetrators of such heinous crimes against humanity.”

Other family members present during the condolence meeting at the Bhat family’s ancestral house nodded in agreement.

“When it was time for us to mourn the irreparable loss, we were coerced to hit the streets to demand the return of the body of our beloved uncle. The magnitude of our collective psychological torture is inexplicable,” Saima, a niece of Bhat and a working journalist, told The Federal.

Though Saima thanked the senior police officers and administration for at least respecting their demand for return of her uncle’s body, she maintained that “the bigger fight for justice continues.”

A close family member alleged that there were visible torture marks on Bhat’s body. “It is apparent that the government forces’ personnel first tortured (Altaf Bhat and Mohsin Gul) before pumping bullets into their bodies,” one of them alleged.

At the time The Federal visited the Bhat family in Barzulla, the hall was jam-packed with mourners consoling each other; some weeping and shrieking. Relatives, friends and neighbours attending Friday’s condolence meeting were speaking highly of Bhat’s antecedents, mannerisms, and success in real estate business.

“Without police verification, Altaf would never entertain a tenant,” one of the close relatives said.

At least three witnesses said that Altaf, Mudasir and Amir were let off by the government forces’ personnel after inspecting the building and shopping complex owned by Bhat. Dr Gul was Bhat’s tenant and ran a call centre there. Amir was Gul’s assistant.

“During the cordon and search operation on the evening of November 15, about 50-60 people were assembled at a nearby Royal Enfield showroom in Hyderpora. All of us were frisked. Our mobile phone devices were confiscated. I saw Altaf, Mudasir and Amir, too. The troopers first called Altaf and let him go after a while. This happened twice. Then, Mudasir and Altaf were called together,” one of the witnesses said, adding that “after a while we heard screams. Initially, we thought that someone in the neighbourhood was making some noise. The screams kept growing louder. And then, we heard the sound of bullets.”

Another witness told The Federal that Amir was also let off and he even spent 30-40 minutes at a nearby hospital. “All of us were unarmed. All were checked thoroughly. I am so shaken that I cannot summon courage to visit the haunted place again,” a visibly shaken witness said.

“On his (Altaf Bhat) chest we saw a bullet mark. On other parts, there were torture marks,” said another family member.

One of the cousins of Bhat told The Federal that the police withdrew their statement at least thrice, which is a telling commentary on the state of affairs in Kashmir.

“They (the authorities) are in the know of everything from the word go. This magisterial probe is just hogwash. It is an open and shut case: a fake encounter and extrajudicial killings of civilians,” he asserted.

Fearing reprisal from the authorities, some family members did not want to be named.

L-G Manoj Sinha has ordered a magisterial inquiry by an officer of the Additional District Magistrate (ADM) in the alleged Hyderpora shootout.

“The government will take suitable action as soon as the report is submitted in a time-bound manner. The Jammu and Kashmir administration reiterates the commitment towards protecting lives of innocent civilians and it will ensure there is no injustice,” Sinha said in a statement. Soon after, a formal order was issued to this effect.

The L-G’s action has, however, least impressed the political parties in J&K. The People’s Alliance for Gupkar Declaration (PAGD) — a political conglomerate formed for restoration of the region’s semi-autonomous status and statehood — said that “those involved in the Hyderpora incident must face the law.”

It said that the amalgam’s aim is to “safeguard the lives of the people” and that it “won’t allow Kashmir to turn into a graveyard.”

J&K’s veteran communist leader Mohammed Yousuf Tarigami lent his support to the demand of the victims’ families for a judicial probe, while demanding return of body of the third person killed in the contentious Hyderpora gunfight.

“Kashmir is witnessing an excruciatingly painful period. Innocent civilians were killed in the Hyderpora encounter. We demand a judicial probe into the civilian killings,” Tarigami said. He urged the “Government of India to return the body of Amir Ahmad Magray, a resident of Gool in Ramban district, without delay.”

He said justice cannot be expected from a magisterial inquiry. “What kind of justice system is this that the ones who are accused (J&K administration) will conduct the probe themselves. Only a judicial probe will do,” he asserted.

“Will Magray’s body be returned to his family? And if not, why? Does the administration and we (the society) think that he was a child of a lesser mortal? And what about the identity and details of the fourth one killed? Or was there a fourth one? Was there even a combatant among them?” asked Agha Ruhullah Mehdi, senior National Conference leader, three-time MLA and a former cabinet minister in the J&K government.

In March 2000, the Indian Army had claimed gunning down five “foreign mercenaries” in Pathribal area immediately after a massacre of over 30 members of the Sikh community there in south Kashmir’s Anantnag district at the time of then US President Bill Clinton’s India visit. Later, it turned out that all five were labourers from neighbouring villages.

Similarly, in 2010, three civilians were killed in a staged gunfight in the Machil sector in north Kashmir. Recently, three poor labourers from Rajouri were killed in south Kashmir’s Amshipora in Shopian district in a fake encounter.

On Friday, the Kashmir Valley observed a shutdown to protest the civilian killings in Hyderpora action. Shops, business establishments and private offices were closed while public transport was off the roads. Major markets in Srinagar city wore a deserted look; only some odd private vehicles could be seen plying on the roads.

The call for a shutdown was given by the All Parties Hurriyat Conference, a pro-resolution political amalgam.

The J&K Police had initially claimed that Bhat, a prominent businessman and Dr Mudasir, a dental surgeon, were “militant associates” while Magray was a “hybrid militant”. The charges levelled by the police instigated a furious response from their family members, civil society and major political groups cutting across ideological divides.