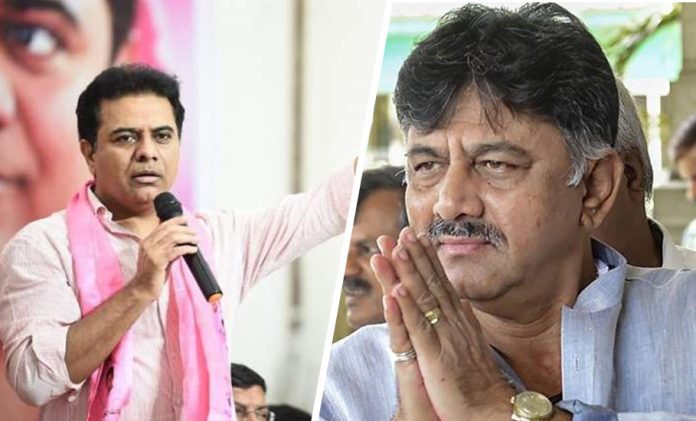 Telangana IT minister KT Rama Rao agreed to compete healthily with Karnakata to create jobs for youngsters. "Let’s focus on infra, IT&BT, not on Halal & Hijab," he tweeted in response to DKS challenge

Amid the growing unease in Karnataka over rising right-wing communal activism, the state Congress chief DK Shivakumar and Telangana Minister KT Rama Rao sparred on social media over which city – Hyderabad or Bengaluru – is today better equipped to be crowned as India’s Silicon Valley.

This joust between the two political leaders took off after Housing.com and Khatabook founder Ravish Naresh complained bitterly about the inadequate and poor infrastructure in Bengaluru. Naresh tweeted that startups in HSR/Koramangala are already generating billions of dollars of taxes but they have to contend with very bad roads, almost daily power cuts, poor quality water supply, unusable footpaths.

He went on to mock Bangalore for being famously referred to as India’s Silicon valley by saying many rural areas now have better basic infra than Silicon Valley (sic). He had tagged PM Modi, BJP party official handle and BJP MP Tejasvi Surya in his post.

Instead, the intrepid KT Rama Rao tweeted back, asking Naresh to pack his bags and move to Hyderabad! “We have better physical infrastructure and equally good social infrastructure,” he pointed out, adding that their airport is one of the best and getting in and out of city is a breeze. “More importantly our Govt’s focus is on the 3 i’s Mantra; innovation, infrastructure and inclusive growth,” he concluded.

Pack your bags & move to Hyderabad! We have better physical infrastructure & equally good social infrastructure. Our airport is 1 of the best & getting in & out of city is a breeze

A few days later, Karnataka Congress chief DK Shivakumar dived into the conversation, throwing a challenge at KTR. Calling him his “friend”, he said that he accepts his challenge and by the end of 2023, with Congress back in power in Karnataka, they would “restore the glory of Bengaluru as India’s best city”.

.@ktrtrs, my friend, I accept your challenge. By the end of 2023, with Congress back in power in Karnataka, we will restore the glory of Bengaluru as India’s best city. https://t.co/HFn8cQIlGS

To which, KTR swiftly responded, “Anna, I don’t know much about politics of Karnataka and who will win but challenge accepted.” Further, he wanted Hyderabad and Bengaluru to compete healthily to create jobs for our youngsters and prosperity for our great nation. And wrapped it up with a line that should sting the ruling party in Karnataka as much as Will Smith’s slap in the Oscars. “Let’s focus on infra, IT&BT, not on Halal & Hijab,” he said.

Dear @DKShivakumar Anna, I don’t know much about politics of Karnataka & who will win but challenge accepted👍

Let’s focus on infra, IT&BT, not on Halal & Hijab https://t.co/efUkIzKemT

Last week, as calls given by right-wingers to ban Muslim traders from temple festivals started to pick up momentum, Biocon chief Kiran Mazumdar Shah urged CM Bommai to “resolve the growing religious divide” in the state, warning that if the tech sector gets communal, India would lose its global leadership in this space.

She was immediately slammed by the BJP, who said that she was trying to impose her personal and “politically coloured opinion”. Amit Malviya, in charge of the BJP’s national information and technology department, tweeted that it was “unfortunate to see people like Kiran Shaw impose their personal, politically coloured opinion, and conflate it with India’s leadership in the ITBT sector”.

But, it is a undeniable fact that IT and startup hub Bengaluru, has been in the news for the wrong reasons of late. Pro-Hindu groups have been fostering communal divisiveness by targeting Muslims over the hijab and banning them from trading in halal meat outside temples and at religious events.

The Hindutva groups have been attacking Christian groups as well accusing them for forced religious conversion without any data to back up their claims. In this politically coloured backdrop with Bengaluru on a backfoot, the old rivalry over which is a better city for tech entrepreneurs has surfaced: Bengaluru or Hyderabad? Take your pick.