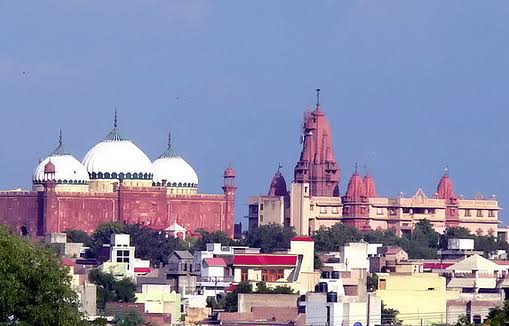 The dosa stall owner, who has filed an FIR against the vandalisers, had to change the name of the stall in Vikas Market in Mathura to 'American Dosa Corner'

Local rivalry and Hinduvta groups flexing their muscles led to a few people vandalising a dosa eatery run by a Muslim called ‘Shrinath’ at Vikas Market in Mathura. The owner had to change the name to the less offensive ‘American Dosa Corner” since the group was objecting to naming the stall after Hindu gods.

According to a report in The Print, this incident which had happened on August 18 came to light after a video went viral on social media showing a mob outside the eatery taunting the owner Irfan –with this chant –Krishna bhakton ab yudh karo, Mathura ko bhi shudh karo” (Krishna devotees go to battle and purify Mathura).

In an FIR filed against anonymous persons ten days after the incident at Kotali police station, Irfan, who runs the shop said that some people approached his stall and threateningly asked him why he had named it “Shrinath.”

The accused then allegedly tore the banners and warned him to withdraw his eatery from Vikas Market in the city, said a News18 report.

Irfan told The Indian Express that they had been running the stall for the last five years and they had no problem until now. “We did not even imagine there could be an issue,” he said adding that the people tore the banners and said that Muslim people cannot run a shop with a Hindu name. “They seemed to have an issue with the name,” he pointed out.

Also read: Aligarh as Harigarh? Ahead of polls, Yogi on name-changing spree

Devraj Pandit, the man who led the mob against the small stall, accused the vendor of “economic jihad”. Pandit, who claimed that Hindus don’t get employed because of people like him, appealed to his Facebook followers to “rebel against such vendors who seek the aid of Sanathana dharma”, added the News18 report.

A Muslim Dosa vendor was attacked by a mob of right wing viglantes in Vikas Bazar, Mathura. The shop was vandalized by the mob and the man was threatened with FIR for waging “Economic Jihad.” The mob was chanting, “Krishna Bhakton ab yudh karo, Mathura ko bhi Shudh karo.” pic.twitter.com/F7IYpqDI3O

A local UP police officer was anonymously quoted as saying in The Print report that this was an outcome of rivalry from a competitor in the same market. Pawan Yadav, who recently started a dosa eatery with the same name (Shrinathji South Indian Dosa Corner) had informed Hindutva groups about Irfan’s stall since he was jealous of its popularity.

Meanwhile, Antarrashtriya Hindu Parishad (AHP), a breakaway faction of the Vishva Hindu Parishad that was founded in 2017, claimed responsibility for the vandalism, alleging that the Muslims were indulging in “economic jihad”.

AHP’s Mathura city president Shrikant Sharma told ThePrint that a Hindu bhai’s business  was suffering because of another stall of the same name. They were snatching his business away from him and this was a classic case of ‘economic jihad’. “And we won’t tolerate it anymore,” said Sharma.

However, Rajesh Mani Tripathi, a Hindutva activist who was among the mob that vandalised the stall, told a different story.

He alleged that he had asked the Muslim man to change the stall’s name since he was  deliberately “misled” by the Hindu name of the stall. His religious sentiments were hurt as the Muslims had appropriated the name of Hindu gods.

The Print article quoted him further saying that Muslims should stop appropriating their gods and run businesses in their names. Saying that he would ensure that it happens across Mathura, he also urged Muslims to do “ghar vapsi” first instead of “stealing Hindu gods”.