The Election Commission announced on Friday (October 14) that voting for the Himachal Pradesh Assembly election will be held on November 12. The votes will be counted on December 8. 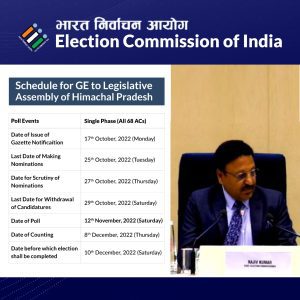 The CEC said the Commission was following past precedence in keeping the announcing in abeyance the schedule for Gujarat Assembly.

The term of the current BJP-led Himachal Pradesh Assembly, ends on January 8, 2023. It has 68 seats with 35 as the majority mark. 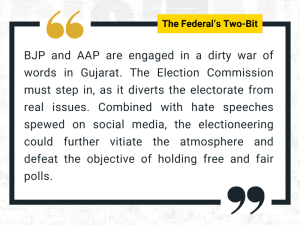 In the 2017 Assembly election, the BJP won 44 seats against the Congress’ 21. Over 55 lakh voters are eligible to exercise their franchise for 68 Assembly seats in Himachal Pradesh, Kumar said.

Himachal Pradesh has a 68-member assembly and the BJP had won a clear majority by winning 44 seats in the 2017 elections. The Congress managed to win 21 seats, Independents bagged two seats and the CPI(M) emerged victorious on one seat. In percentage terms, the BJP won 48.79 per cent of the total valid votes, followed by the Congress (41.68 per cent) and Independents (6.34 per cent).