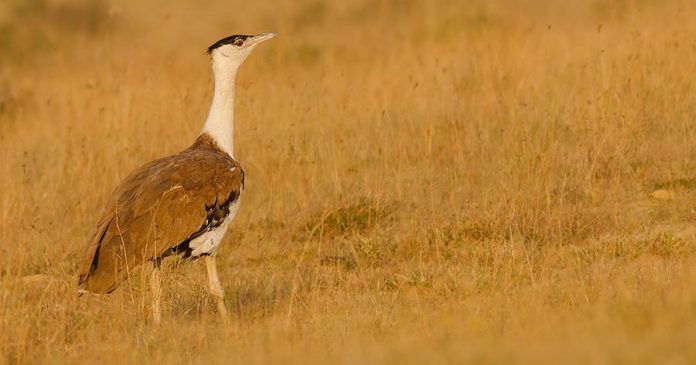 The Great Indian Bustard is a large and spectacular bird whose numbers are dwindling at an alarming rate.

Since the 1960s when renowned ornithologist Salim Ali suggested the Great Indian Bustard (GIB) as the ‘national bird,’ the species has come under ferocious and persistent attacks, forcing it on the brink of extinction.

The GIB is a large and spectacular indigenous bird, whose number, in spite of the legislative ban on its killing, is dwindling at an alarming rate due to poaching by vandalistic gunners and also encroachment upon its natural habitats. “It needs an urgent nationwide effort to save the bird from its impending doom,” Salim Ali had said.

However, the government chose the peacock as the national bird over GIB. The reason given by officials for not selecting GIB was eccentric. They said ‘bustard’ sounds profane as it equals to the word ‘bastard.’ So, the bird lost its chance.

Having such a wounded history, the GIB turned into a villain: Last week, a section of the media went overboard claiming the species was a hindrance to India’s “green goals”. The ‘green goals’ are aimed at setting up solar parks in Gujarat and Rajasthan.

Making the bird a villain

Renewable energy companies have decided to approach the Supreme Court seeking a revision in the court’s earlier order in April this year. The court has ordered the companies to lay the power lines underground instead of overhead. It has also expanded the areas that should be protected by including large swathes of “potential area” (setting up of solar park in future), which will cost the companies additionally.

The companies’ objections are that while low-voltage power lines can be laid underground, it is difficult to “bury” the high-voltage power lines. They have also sought to restrict the protection area only to a “priority” area, where the existing solar parks are being set up.

The companies plan to file a petition on June 29.

While this is the case with corporate companies, the media’s depiction of GIB is even more worrying. Describing the species as a “giant”, “blind”, “serious problem”, the media has turned the bird species into a villain. Those reports also had scant understanding of grasslands and termed them as “wastelands”.

A saviour of grasslands

There are 26 species of bustards found across the world. In India, there are four types of bustard species — Great Indian Bustard (Ardeotis nigriceps), Bengal Florican (Houbaropsis bengalensis), Lesser Florican (Sypheotides indicus) and Asian Houbara (Chlamydotis macqueenii). While the first three species are native, the last one is a migratory bird.

Out of the four, GIB is endemic to India. The semi-arid grasslands are its habitat. Once it was a popular game bird, which led to its dwindling population.

According to a publication by Bombay Natural History Society (BNHS), habitat degradation and hunting in the past have resulted in the disappearance of the species from about 90 per cent of its range.

“The threats have increased manifold — conversion of grasslands to agriculture or for other uses and change of marginal farming to intensive farming,” said ‘Great Indian Bustard — On the brink of Extinction’ authored by Sujit Narwade and others in 2015.

Of late, there have been recorded incidents in which the birds collided against power lines and died. Being the heaviest flying bird and having monocular vision, it is unable to judge the distance and collides with high tension wires.

According to a study by Wildlife Institute of India, about 18 GIBs are dying every year due to collision with power lines. As of now, the bird’s population is less than 100.

“The bird lays only one egg. If that egg is infertile, destroyed or predated by other animals, then there are chances that the bird can lay another egg. Similarly, if the chick depends on its mother, then the bird cannot lay an egg. In GIB, there is no parental role for the male. It’s the female who takes the responsibility,” said Narwade, scientist, BNHS.

“Bustards are considered as flagship species of grasslands owing to their habitat association and charismatic nature. The larger species are considered ‘extinction prone’ due to their slow life-history traits,” says Narwade.

Grasslands are a vital source of fodder for livestock of rural communities. Increasing human and livestock populations have been exerting huge pressures on the grasslands over many years, leaving them in smaller, fragmented and degraded patches, said Narwade.

“The GIB mainly feeds on insects like grasshoppers and locusts. It usually takes 1 to 2 kg of food. By that count, consider if 1,000 GIBs feed on insects. It will naturally keep the pests in control. But due to rampant usage of chemicals, fertilizers, insecticides and pesticides there is a fodder shortage. This adds to their vulnerability,” he added.

There are six different types of grasslands around the world — tropical, temperate, tundra, flooded, montane and desert grasslands.

“These grasslands are acting as habitats not only for GIBs. A lot other birds, insects and animals also depend on grasslands. More importantly, it provides fodder for other animals,” said Vasanth Bosco, an environmentalist based in the Nilgiris, who is involved in restoring the shola grasslands. Sholas are the local name for patches of stunted tropical montane forest found in valleys amid rolling grassland in the higher montane regions of largely in Kerala, Karnataka and Tamil Nadu.

The lack of grasslands causes an imbalance in herbivore and carnivore populations, resulting in human-animal conflict, Bosco said.

It is very difficult to change the attitude of people towards grasslands, he said.

Opposition parties may have differences but u...