Four bank unions in the country have threatened to go on an indefinite strike from the second week of November in protest against the recent merger of banks by the Union Finance Ministry, ANI reported.

Also read: Bank mergers will not cause any job loss, assures FM Sitharaman

The general secretaries of the four unions announced the strike in a letter to the chairman of Indian Banks’ Association on Wednesday (September 12). “In accordance with the provisions contained in sub-section (1) of Section 22 of the Industrial Dispute Act 1947, we hereby give you notice that 4 Officers’ Trade Union Organizations as stated above, propose to go on continuous strike from midnight of 25th September to midnight of 27th September 2019 and indefinite strike from the second week of November 2019,” the later stated. 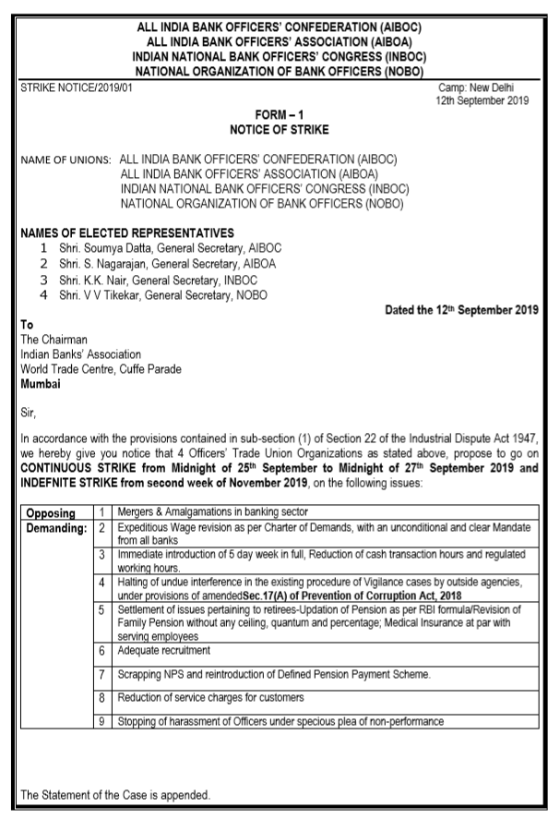 The letter also listed out nine demands – expeditious wage revision as per Charter of Demands, with an unconditional and clear mandate from all banks, immediate introduction of 5 day week in full, reduction of cash transaction hours and regulated working hours, halting of undue interference in the existing procedure of vigilance cases by outside agencies, under provisions of amended Sec.17(A) of Prevention of Corruption Act, 2018, settlement of issues pertaining to retirees-updation of pension as per RBI formula/revision of family pension without any ceiling, quantum and percentage; medical insurance at par with serving employees, ANI reported.

The unions have also asked for adequate recruitment, scrapping of NPS, reintroduction of Defined Pension Payment Scheme and a stop to alleged harassment of officers for non-performance, ANI reported.

No reports of medicine shortage in wake of coronavirus outbreak: FM