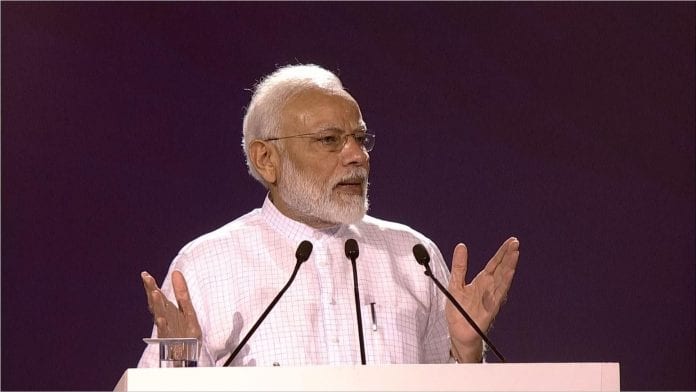 Prime Minister Narendra Modi on Thursday (August 29) launched the Fit India Movement on the occasion of National Sports Day, saying that the initiative is the need of the hour and will take the country towards a healthier future.

At a colourful ceremony, which included a presentation of India’s indigenous martial art forms, dances and sports, Modi said that technology has contributed to a sedentary lifestyle. He had announced the launch of the campaign during ‘Mann Ki Baat’, his monthly radio address on August 25.

“Fitness has always been an integral part of our culture. But there is indifference towards fitness issues now. A few decades back, a normal person would walk 8-10km in a day, do cycling or run. But with technology, physical activity has reduced. We walk less now and the same technology tells us that we are not walking enough,” Modi said at the event.

The event was held at Indira Gandhi Stadium Complex in New Delhi. The campaign’s launch was telecast live on Doordarshan and had been streamed on social media platforms like Facebook and Youtube.

The launch was also attended by Sports Minister Kiren Rijiju and this year’s National Sports Awards winners among others. “We will take this movement to new heights with the cooperation of my fellow Indians. I am so glad that this movement is being launched on the birth anniversary of Major Dhyan Chand, our hockey wizard,” Rijiju said at the launch.

The Prime Minister also congratulated the winners of the national sports awards and lauded India’s sporting achievements. “Be it boxing, badminton, tennis or any sport, our athletes are giving new wings to our aspirations. Their medals are not just a result of their hard work but also a reflection of a new India’s confidence,” he said.

The campaign is being supported by sports icons like badminton champion PV Sindhu, wrestler Sakshi Malik and sprinter Hima Das.

I pay my tributes to the wizard of Hockey, Major Dhyan Chand on his birth anniversary which is celebrated as National Sports Day. On this important ocassion, I call upon people, especially the youth and children to make sports a part of their daily routine. #NationalSportsDay pic.twitter.com/fyCBuF9FoK

On #NationalSportsDay, paying my respects to Dhyan Chand Ji, the wizard of hockey, and also to all athletes who play for our country with vigour and passion. ? pic.twitter.com/ad5XI5Qgwt

Heartfelt Tributes to the legend, 'The Magician Of Hockey' and 'The Wizard' #MajorDhyanChand on his Birth Anniversary. Greetings to all fellow Sportspersons on the occasion of #NationalSportsDay. ?? pic.twitter.com/QIkZ0kJyRk

Tributes to 'The Wizard' of hockey, the great #MajorDhyanChand on his birth anniversary.
Also salute to all the sportspersons who have made India proud with their hardwork and determination.#NationalSportsDay pic.twitter.com/BYA1abb3iR

“The country will be benefitted if every citizen of new India is fit. When there is awareness on fitness in you, you will set your routine accordingly. You will consciously avoid things that are harmful for the body. Swami Vivekananda used to say that if life has a purpose, peace and progress will be its by-products. To achieve such a purpose we should have a strong will,” the PM said in his address.

Stressing on the correlation between fitness and success, Modi said that only a fit person can be a successful person. “There is no elevator to success. You have to take the stairs. But you can take the stairs only when you are fit. Fitness and success are interconnected. Look at your icons and their success stories. You will see most of them are fit. It is not a coincidence. If you read about their lifestyle, you will see that the common thread that joins them is their focus on fitness. If you want to bring efficiency to your profession, you have to be fit. Be it boardroom or Bollywood – the one who is fit is the one who can reach for the skies,” he said.

BJP won in Gujarat because it took projects f...

HP polls: BJP suffers setback in three out of...