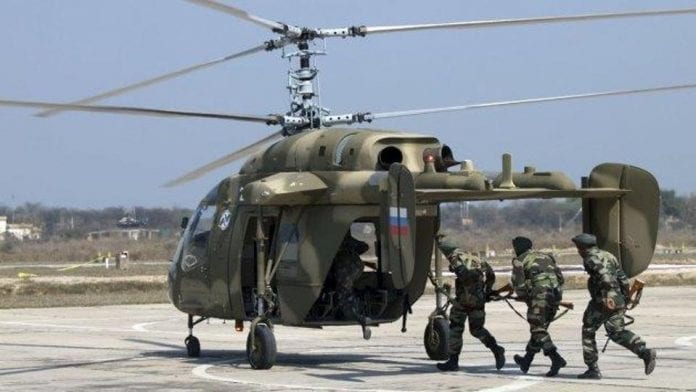 The first batch of Kamov military helicopters, to be manufactured in India under an Indo-Russia joint venture, is expected to be rolled out by 2025, a top official overseeing the project said on Thursday (February 5).

In October 2016, India and Russia finalised a broad agreement for the joint venture between Hindustan Aeronautics Ltd (HAL) and two Russian defence majors for production of the helicopters in India.

The first batch of helicopters will come out of our production facility at Tumkur in Karnataka by 2025 if everything goes as per plan, Indo-Russian Helicopters Ltd CEO NM Srinath said.

Under the joint venture, 200 Kamov 226T helicopters will be produced. Of these, 60 will be supplied to India in fly-away condition while 140 choppers will be manufactured in India under a USD 1 billion deal. India is procuring the Kamov choppers to replace its ageing Cheetah and Chetak helicopters.

The Kamov Ka-226T helicopter has 72 per cent Russian components and 28 per cent from various western countries.

The joint venture has already sent a detailed proposal to the government on the production of the helicopters, including proposed percentage of the indigenous component. A final decision on the order will have to be cleared by the Defence Acquisition Council, the highest decision-making body of the Defence ministry on procurement.

The government approved the technical configuration for the twin-engine multi-role helicopter, which is known for its superior manoeuvring capabilities in mountainous areas. The Kamov helicopters will be supplied to the Indian Air Force and the Army. Both the forces have been pressing for early conclusion of the deal so they can replace their ageing fleet within the next three to four years The joint venture has already finalised an agreement specifying work-schedule and techno-commercial issues.