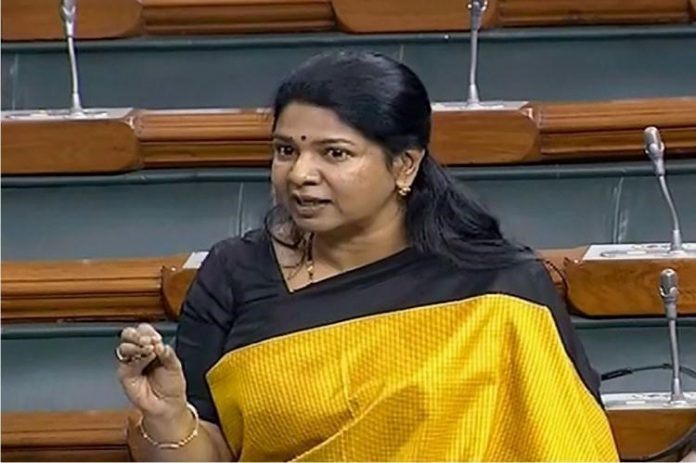 Kanimozhi pointed out that there are 110 female MPs but the government has chosen to assign a Bill that affects every young woman in the country to a panel made up of 30 men and only one woman. PTI file pic

DMK MP Kanimozhi lashed out at the government on Monday (January 3) over the presence of just one woman MP in the parliamentary panel set up to examine the Bill that seeks to raise the legal age of marriage for women from 18 to 21. She questioned why men continue to decide the rights of women who then just become “mute spectators”.

Kanimozhi criticised the fact that there are 110 female MPs but the government has chosen to assign a bill that affects every young woman in the country to a panel made up of 30 men and only one woman. Sushmita Dev, the Rajya Sabha MP from Trinamool Congress, is the only woman MP in the Parliamentary Standing Committee on Education, Women, Children, Youth and Sports.

“Men will continue to decide the rights of women. And women will be made mute spectators,” said Kanimozhi, according to media reports.  Kanimozhi’s scathing attack on the government comes after a Shiv Sena MP Priyanka Chaturvedi dashed off a letter to Rajya Sabha Chairman M Venkaiah Naidu requesting for more representation and participation of women in the very important discussion on the eligible marriage age Bill since the 31-member panel had only one woman.

In her letter, she had expressed her dismay at the fact that the committee had only one female Member of Parliament as a member. She found it disheartening that a Bill, which is so pertinent to women and the Indian society will be deliberated upon in a committee where the representation is highly skewed. She wanted the voices of women to be heard by the committee.

The Prohibition of Child Marriage (Amendment) Bill which seeks to raise the legal age of marriage for women to 21 years from the current 18 years will be examined by a committee headed by BJP MP Vinay Sahasrabuddhe.

The legal age of marriage for women will be raised based on suggestions by the Jaya Jaitly Committee constituted by the Women and Child Development ministry.